Founded in 1706 by Don Francisco Cuervo  y Valdes, the city was named San Franciso de Alburquerque. Later the first “r” was dropped.  We are impressed with the City’s preservation of its Route 66 culture in the downtown area, its respect in preserving the Native American history, and the Spanish and Mexican influence in the plaza.

The El Vado is typical of the Route 66 motels which sprung up in the days travelers passed through town headed west.  Many such motels are found in Albuquerque’s downtown area.

MADONNA OF THE TRAIL – LOOK FAMILIAR?  THIS STATUE IS PROMINENT IN ALBUQUERQUE’S DOWNTOWN AREA:

END_OF_DOCUMENT_TOKEN_TO_BE_REPLACED

Taking a break from the glitz and nostalgia of Old Route 66, we took a loop road to the Acoma Pueblo.  But first, we stopped at the Route 66 Casino to make our donation to the Native Americans.

A break from the screaming neon, the small road to Acoma offers wide vistas, relaxing prairies, and a few small villages.  Arriving at the Mesa we stopped for a Navajo Taco at the Cultural Center.  It is a beautiful facility – maybe it is funded by the casino?

END_OF_DOCUMENT_TOKEN_TO_BE_REPLACED

One day on the road and we have met many route 66 buffs from the U.S, and abroad!  Out of Needles we headed for Kingman and found the scenery much more enjoyable traveling at 55 instead of 75.  A few miles before Kingman we spotted Area 66, a must-stop and see!  Giving his mom a break, John who resides in Glendale, was running the place.  Resembling a raised golf ball, the Dinesphere is a geodesic dome located in Yucca, AZ, on a re-alignment  of Route 66.  It was built in 1972 as a restaurant-nightclub, but today is not open to the public.  The small store that John was running specializes in beef jerkey and out-of-this world souveniers of the close encounter kind.  Alien doo-dads of all kinds abound.  Check it out at info@area66.com. 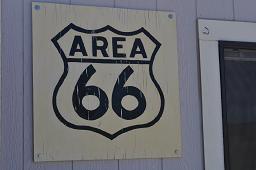 A stop at the Powerhouse Route 66 Museum in Kingman was enjoyable and there we met a family from Germany who happened to share our last name.  The daughter and her husband were riding a Harley while Dad and Mom followed in an SUV.  They were headed to Chicago but making a detour to the Grand Canyon.  We met up again across the street at MrD’s, a Route 66 Icon cafe and soda fountain.

While in Kingman we paid a visit to Jim Hinckley, author of several books including Ghost Towns of the West, and a book we just purchased while there:  Route 66 Backroads: Your Guide to Scenic Side Trips and Aventures from the Mother Road.  He gave us some tips and suggestions for the trip ahead.

A stop at the Hackaberry General Store had my husband snapping photos like crazy, especially in the men’s room which you have to see to believe (i did take a peek).  And guess who we ran into there!  The Hellers from Germany.  Also, a Route 66 traveler from Africa.

Heading east our next stop was Seligman where we dropped into the curio  and barber shop to see the famed Angel Delgadillo – the man who made the town famous by bringing its Route 66 ties to the general public.  He was home resting when we got there, but his older brother, Joe, 90 years old, greeted us.  We bought souveniers again and headed for Flagstaff for the night.  The Flagstaff weather was mild, a respite from the 100 degree plus temperatures we had been experiencing.  Our RV campsite is delightful and within walking distance is Black Barts where we plan to order a rib eye in the next half hour.

END_OF_DOCUMENT_TOKEN_TO_BE_REPLACED

camel brigade.  Camels were being trained as work animals to use in the Civil War.  Lt. Beale led a caravan of the camels from Texas, through New Mexico, Arizona to California.  They traveled through the Mojave desert in areas that are now crossed by Route 66.

In the end, the camels had a hard time with the gravel and lost out to the burros.

My ride was exciting but Bert’s dental hygiene was questionable.  He had green moss dripping from his mouth.

On the Gold Road Mine Tour visitors are led through the mine, and at one time actually pass under Route 66.  For those of us who aim to travel on the road, under the road, and over the road, this is a must!  The old minng town is gone, but nearby you can visit the Arizone town of Oatman, feed carrots to the burros that roam through town, and pick up just about any kind of Route 66 momento.  It is just a short drive from Laughlin, Nevada.  The scheduled shoot-outs are somewhat hokey, but the old hotel is picturesque and throws you back into the days of the wild west.

END_OF_DOCUMENT_TOKEN_TO_BE_REPLACED

Celebrating retirement and reaching the age of 66, I’m off on an adventure – trekking Route 66 across it’s historical miles to Chicago.  I hope you will come along and meet the people and see the sites along the way.

The journey has been years in the making.  A big decision to retire from our jobs, purchase a car that would pull a trailer, and finally, the one we procrastinated on the longest  – the purchase of a trailer.  We sat in hundreds of trailers at trailer shows and showrooms but just couldn’t seem to make a decision.  Then a friend of a friend was selling his 19 foot trailer and when we saw it, we knew it was the one.  It is small, but has just what we wanted and is a manageable size.  It even fits into our driveway.  Backing up is problematical, but we are getting the hang of it.

We took 2 trial runs:  The Ocean Mesa RV park above El Capitan beach north of Santa Barbara is beautiful, tho pricey.  We took our granddaughter Hailey and her friend Rhea.  They had a ball and the trailer slept 4 nicely.  Then we went to McGee Creek Campground at Lake Crowley in the Eastern Sierras and had a perfect pull through campsite with a view of Crowley and the Sierras.  We sat at our picnic table and watched starling parents feed their young under the watchful eye of a wren.  To boot I caught 5 fish at Benton Crossing

Ok, we are ready.  Tomorrow morning we head out.  Will report