Headed for Trona, we camped for a night at the beautiful Red Rock Canyon.  If it looks familiar it is probably because of all the movies filmed there – from cowboy flicks to Star Trek.  There is something hauntingly beautiful about camping below the crimson cliffs and enjoying the desert in the various shades of the day.  To us, it is also full of memories of the years we would take the kids camping there.

Once home to the Kawaiisu Indians, there are petroglyphs in the area here at the western edge of the El Paso mountains.  During the 1870s the colorful rock formations served as landmarks for 20-mule team freight wagons that stopped for water.

There are also remnants of the 1980s mining era operations.

Redrock is a State Park and considering there are no hook ups, showers, etc., the camp fee is rather steep.  We paid $26.00 and that was the senior discount price.  But we enjoyed the solitude, the view and the peacefulness of our campsite. And the stars at night were fantastic.

HOLD YOUR NOSE:  WE ARE ENTERING TRONA, HOME OF THE SEARLES LAKE MINING COMPANY AND LOTS OF SAND AND SALT

Known as The Gateway to Death Valley, Trona is about 20 miles from Ridgecrest.  It is such a depressed little town plagued with the constant smell of chemicals and earth that refuses to grow grass.  There is very little landscaping around the businesses and homes and I’d guess about half of the residential area homes are abandoned and boarded up.

We were allowed to camp about 3 miles out of town and although it was just a sandy field, we loved the view, the stars, the sunset and our friendly camping neighbors.

Everyone grabbed their buckets and starting collecting rocks.  There were lots of young people, students who gather the rocks, clean them up and sell them for a fundraiser for school entities and clubs.  The kids in town collect containers all year long, fill them with awful stinky brine water and sell them to the collectors.  That is what you clean your rocks with.  If you clean them in regular water, they are water soluable and will break down and disappear.

I felt damn important with my gloves on.

This is pink halite.  We didn’t go on the trip where this is found because we read in the brochure:  “When looking for pink halite do not wade more than calf deep into the muddy brine water.”  Yuch!  Alan bought this specimen for $6 which is less than we would have spent on waders.

TIME FOR THE DEMONSTRATION.  “STAND BACK” WE HEARD FROM THE LOUD SPEAKER.  A pipe then pumped up material from 40 feet below and spewed it out onto the lake bed.  When it stopped the crowd waded into the muddy water and again began digging.  The blow hole was something to see!

Back at camp, everyone brought out their brushes and brine water and began cleaning their finds.  In novice fashion I started scrubbing my rocks and the brine water began stinging my hands.  I learned to wear rubber gloves when working with that awful stuff.  And it stinks.

Rock hunting was fun and we collected a bucket full for our rock garden.  But Alan’s favorite event of the weekend was going to the Trona High School v. Big Pine Football Game.  Trona has the last dirt high school football field in the nation.  Remember, grass won’t grow here!

Unfortunately the Tornadoes lost the game.  It is 8-man football.  They once played Rio Hondo Prep.  I loved seeing the spirit of the crowd and the team bursting in community pride.

HEADING OUT ON SUNDAY WE STOPPED and HIKED AT  NEARBY TRONA PINNACLES WITH ITS PICTURESQUE TUFA TOWERS.

GOODBYE TRONA.  WE’LL BE BACK NEXT YEAR FOR MORE ROCKS!

We camped in the parking lot behind Pappy & Harriet’s, our favorite cowboy biker bar!  The guitar player was entertaining and the steaks outstanding.

Every year on the first weekend of October we head out Route 66 and after stopping at Amboy and other little towns along the way, we top off our tank at the state’s most expensive gas station in Fenner then set up camp at Goffs for the Rendezvous.  For the first time we camped at this event in our new trailer.

This circa 1914 schoolhouse served the community as an eight-grade one-teacher school until 1937.  When acquired by the Casebier’s in early 1990 it was badly damaged from vandals and the elements.  It has now been renovated and is on the National Register of Historical Places.  It currently serves as a museum and office and anchors the compound which features dozens of historic buildings and artifacts from the area which is now part of the East Mojave Preserve.  It is located on an old alignment of Route 66 at Lanfair and Goffs Rds. 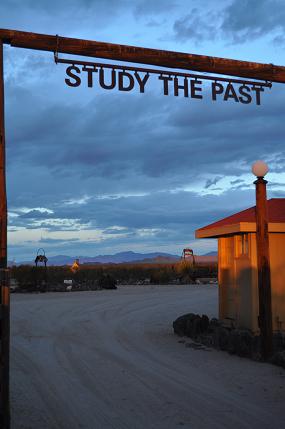 We always feel like we are arriving home when we turn into Goffs and pass through this sign.  This is one of many photos Alan took of the area at sunrise.

Other buildings in the compound include the bunk house, library an Atlantic & Pacific Boxcar, a replica of the old Danby Courthouse, a two stamp mill (which was fired up at this event – see below), and many many more.  Each time we visit there is something added that has been salvaged from the area.

A walk along the compound’s “Boulevard of Dreams” and you are enjoying an outdoor museum. A key to the buildings are artifacts is available at the school house.  It explains the history of each item.

TOUR OF THE VANDERBILT MINING DISTRICT

Saturday morning we joined a caravan of about 8 cars to visit the Vanderbilt Mine.  Our leader was Debbie Miller.  We made many stops in the area and she was well-versed on the history of this mining district.  Our first stop was at the cemetery.

There were many relics left of this once booming mining area.  Under the bluest of desert skies, we visited many of the sites.

Back at camp we headed over to the Stotts Stamp Mill which some pretty dedicated volunteers have spent months restoring.  Amazingly, IT WORKED!

We lined up in front of the North Porch of the Route 66  building for the raffle.

Chris Stahl got the very first raffle prize, and another later.

Larry Boerio showed up late for the raffle and walked into two prizes.

Some people have all the luck! 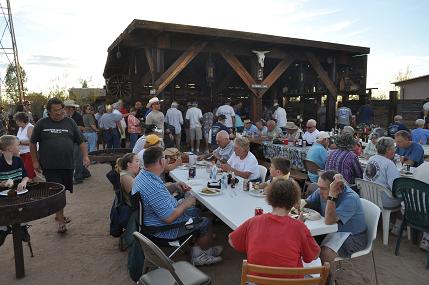 With the sun setting, we headed over to the Flywheel Cafe for a carne asada dinner.

Here’s our group after a cocktail hour that obviously lasted too long.

Chris Lesko – bored with the conversation or too many beers?

JoAnn and Dennis Casebier finally get a chance to eat and relax!

Alan was up at sunrise to photograph around the area.  He was rewarded with a beautiful sky.

ON THE WAY HOME WE STOPPED AT THIS CEMETERY.  I CANNOT TELL YOU WHERE IT IS….I’M SWORN TO SECRECY.  HOWEVER, I WILL SAY IT TOOK ABOUT AN HOUR TO FIND IT EVEN THOUGH WE HAD BEEN THERE ONCE BEFORE.