Headed for the 61st Annual 49er Encampment in Death Valley, we left a few days early to photograph and enjoy the fall colors in the Eastern Sierras.  As a bonus we reached Lone Pine and found a dusting of snow along the mountain ridges.

From our campsite at Boulder Creek RV Park about a mile south of Lone Pine on Hwy. 395 we have a clear view of Mt. Whitney to the west, and the vast expanse of the Owens Valley to the east, as well as the looming Inyos.

Boulder Creek RV park feels like home to us, and we enjoyed a long soak in the spa where we met a couple from Riverside who are doing just what we are – enjoying retirement!

Driving up to Big Pine we took the road to Glacier Lodge. The trout pond was so beautiful with new fallen snow.  We are a little late for the fall colors, but some remain.

Above this area is Palisades Glacier.  The Lodge is closed for the season but would be a great place to stay in the summer.  They suffered a fire a few years ago but are open again on season.

Fall colors in the higher elevations probably peaked a few weeks ago.  Still we found gold

The air remains cold, but the sun is shining and the sky a brilliant blue.  The desert is fresh and calming to the nerves.  We run into few travelers, most are RVing it like we are.

We stopped in Darwin, a tragic not quite ghost town.  The post office is closed.  Broken down wrecks sit everywhere.  Most houses are falling apart and/or boarded up.  The mine is closed and the worker housing vacant.  A few old glass gas pumps sit by the road, and the Darwin Dance Hall exhibits 3 photos:  Elvis, Marilyn Monroe and President Obama.  Go figure!

The road to Panamint traverses a mountain and the down side is about 12 miles of 7 percent grade with sharp curves.  The car ran great and the trailer followed behind obediently.  At Panamint Springs we found a perfect campsite with full hook ups and an amazing view of the valley below.  The restaurant and bar are close by.  No cable, no TV in the bar, i.e. no Laker Game.

The normally quiet Stovepipe Wells is bustling for this week.  There are events at Stovepipe as well as Furnace Creek Ranch, some 30 miles away.  We selected SW for our stay and were fortunate to land one of the only 14 hookup sites in the entire Park.  The restaurant kitchen was destroyed by fire several months ago, so except for a continental breakfast served each morning, we were left on our own for meals.

One of the silly events is the annual dog show and parade. 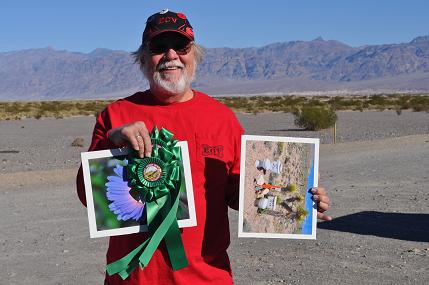 Another event is the photo contest.  Alan won 4 3rd places.  He wasn’t happy. 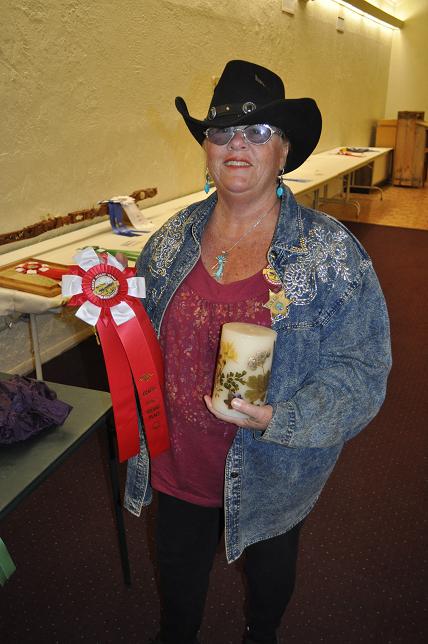 I won 2nd place in the craft category.

Most of the events are held at Furnace Creek Ranch.  After a 50 mile trek, the wagon train arrived.  Hundreds gathered to greet them.

Cowboy entertainment was continuous featuring cowboy music, fiddlers, yodeling and the famed group the Chaparrels.  Alan was mesmerized by the talented cowgirl Belinda Gail.  We enjoyed her singing, bought her CD and had a photo taken with her.

The biggest event of the week is the Encampment Parade which winds through the Ranch.  Anyone can jump in and participate. The Clampers were there in full force, passing the flask and singing God Bless America! 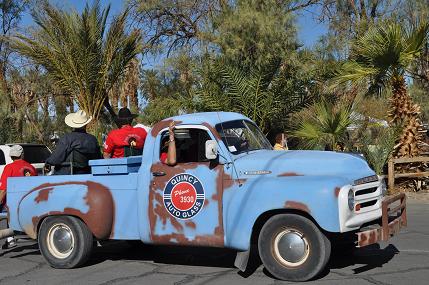 Truck belonging to a Clamper (The Honorable Ancient Order of E Clampus Vitus), or the drunk guys in red shirts.

Two other events were the Prospector’s Race, sort of a triathalon of camp building:

and the wheel barrel race:

The highlight of the week was a visit to Death Valley Junction and the Amargosa Hotel and Opera House.

The hotel (above) is open for business.  In the same plaza is the Opera House.  We attended a production featuring the one-woman show by Marta Becket in the early 1970s.  She bought the opera house after visiting the area from her home in New York.  She spent 4 years painting an audience on the walls, then 2 years painting the ceiling.  Her first production opened in 1968.  She continuously performed as a ballerina until she could no longer dance.  At age 86, she now performs while sitting.  She sang about her show business memories and obviously struck with parkinsons, she managed to change hats and shawls/boas.  She remains a classy lady with a great sense of humor.

The second part of her show was entitled “If These Walls Could Talk.”  Here a mime/actress interviews Marta on video and then acts out some of the individuals painted on the walls.

Three young ladies attended the opera.  They arrived by limo from Los Angeles and were dressed for the occasion.  After the show they followed the crowd to the Hotel Lobby to pay their respects to Marta Becket:

A plaque sponsored by E. Clampus Vitus sets for the history of the Opera House:

The 49er Encampment is held in Death Valley every November.  You can find out details on the Internet.  To join you just pay $25 per family annual dues and this entitles you to attend all of the events during the week.  There is camping at Stovepipe Wells and Furnance Creek, plus rooms at the Ranch and very expensive rooms ($450 plus) at the historic Furnace Creek Inn.

In 1776 when Juan Bautista de Anza explored what is now Anza Borrego State Park, he was duly impressed with its beauty and natural resources.  The largest of California’s State Parks, Anza Borrego is only 3 hours from the San Gabriel Valley and holds a myriad of adventure opportunities for visitors.  Hikes to palm oases, historical wagon trails, ghost mining districts, unequaled public art, scenic vistas, colorful rainbows and sunsets abound.  And smack in the park’s main area is the little town of Borrego Springs with unique gift shops, a myriad of restaurants, private campgrounds and motels with pools and spas.

After exploring the park’s treasures one can stop by Pablitos Mexican Restaurant patio in town and enjoy a cactus Margarita and excellent lunch or dinner.  Other restaurant choices include Italian, French, delis, patio meals at the retro Palms Hotel restaurant called The Red Ocotillo, and much more.

Borrego Springs is a small town with lots to offer.  The southwest shops are excellent!  Local bars are great for people watching and offer live entertainment on weekends.

There is a State campground only a mile from the town proper and other State campgrounds throughout the park.  It is the only State Park in California where you can camp in primitive areas far from the crowds.

On our recent visit we enjoyed perfectly mild desert weather and magnificent star filled nights.  The Visitor Center is one of the best I’ve seen and offers events and programs.  We attended a lecture by astronmer Dennis Mammana. 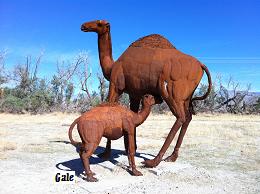 Galleta Meadows Sculptures are on display throughout the park.  It is the strangest collection of public art, a magical menagerie of free-standing life-size sculptures of prehistoric creatures that roamed the valley millions of years ago.  Benefactor Dennis Avery has gifted these sculptures which sit on his private parcels and they are open to the public free of charge.  In addition to camels, sloths, wild pigs, tortoises and camels, he expanded the collection to include explorer Juan Bautista de Anza as well as a section on field workers “who toiled here picking grapes prior to the historic United Farm Workers boycott in the late 1960s.” 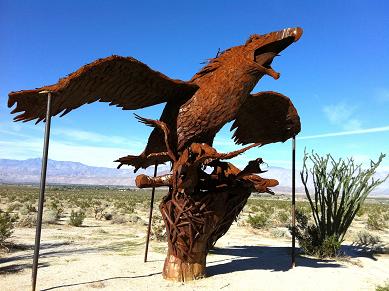 This eagle sculpture is one of the more intricate and detailed of the lot.  Note the rattlesnake and

Arriving at Anza Borrego, Alan realized he did not bring his camera, so if the photos are sub-par, it is because he took them with his I-phone!

Our campsite in the RV park behind the Palm Canyon Resort was backed up to the wide open desert and we had access to the pool and spa nearby.  At night we could listen to the coyotes howling and our view of the desert and mountains was spectacular.

Our visit coincided with Borrego Days which included a craft fair in Christmas Circle and a home-town parade.  The final entry in the parade was the debut of the last of the Galleta sculptures.  Deviating from the core theme, it is of a JEEP:

NEARBY IS THE HAUNTINGLY LOVELY SALTON SEA

People might argue that the Salton Sea, about 30 miles from Anza Borrego, is stale and ugly, but that is not the case.  Bird life abounds on the sea’s shores and the natural features are extremely photogenic.  We had seen a recent episode on Huell Howser featuring the Salton Sea mud pots and set out to find them – a successful venture: 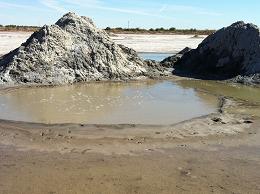 Approaching the mudpots we could hear their gurgling sounds.  Surprisingly the water is cool, not hot, so they are not boiling, just bubbling or roiling.  No one else was around as we gingerly hiked to the site, a little apprehensive that we might sink through the crust and into the muddy lake bed. 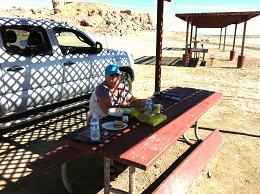 Picknicking at the lake’s shore, we watched an array of birds including black necked stilts, white pelicans, gulls, egrets and herons.