RARE BIRD ALERT:  A bean goose has been sighted at the Salton Sea.  So, we headed out, binoculars in hand, in search of this medium sized goose which breeds in northern Europe and Asia and is seldom seen in the United States.  Scanning flocks of white snow geese we were thrilled to see dozens of sandhill cranes, necks stretched high above their squatty neighbors, but no bean goose.

Easily spooked, the flocks would take flight at the sound of our car, filling the sky with flapping wings and honking cries.

In our search we were pleased to see many beautiful birds as we drove through the fields on dirt roads and climbed the observation tower.

BUT NO BEAN GOOSE.  Here is what my brother Kimball says about the elusive visitor:

So how did it get here?  Remember that there are thousands of Snow Geese in the same fields and ponds at the Salton Sea as the bean-goose, and some of these Snow Geese breed west of Alaska on Wrangell Island, which is off the northern coast of the Russian Far East.  [There are also about equal numbers of Ross’s Geese in the same area at the Salton Sea, but they breed in Arctic Canada].  Maybe even more relevant, the Greater White-fronted Geese that the bean-goose is associating with at the Salton Sea belong to a subspecies that breeds in Alaska, but also in the Russian Far East.  So it is possible that a bean-goose from eastern Russian might get “mixed up” with a flock of eastern Russian Greater White-fronted Geese or possibly Snow Geese and migrate down through the Pacific Coast of North America instead of Japan/Korea/eastern China.

Both species of bean-goose have been found in western Alaska, but neither has been found previously in California.  So whatever this bird is, it’s a “first” for California.

The bean-goose belongs to the same group of geese that includes the Greylag Goose, which is commonly domesticated – domestic greylags are the big white or gray geese in city parks that like to attack you when you get too close.

The Salton Sea bean-goose was first found on November 9th, and was still there at least as recently as Tuesday the 14th of December.

Stopping at the Sonny Bono Salton Sea National Wildlife Reserve, we perused the visitor center and from the bird sighting list we noted that visitors had been regularly sighting the lone bean goose all week.  We returned to the fields and scanned more flocks, but to no avail.

If we couldn’t be successful in our search for a bird, maybe we could at least find salvation so off we went to the nearby strange site of SALVATION MOUNTAIN.

In the nearby depressed town of Niland we stopped for tacos and then took off on a dirt road to find our salvation.  This was our second visit to the Salvation Mountain which was boosted in popularity after a visit by Huell Howser.  This strange attraction was also a backdrop in a segment of the movie Into the Wild, and it appears in the book “Weird California.”

To our delight, Leonard Knight, the creator, was on hand to greet us.  He pulled up a chair for me under his lean-to and we talked while Alan snapped photos.    Several people also were visiting, climbing salvation mountain and peering into the little crevices and caves.

Knight is more into love than religion.  He even has a place in his heart for heathens like me.  He is 79 years old and began painting the mountain in 1984.  He lives in his truck year round, in a spot on the earth where temps reach 120 in the summer months.

A quiet spoken man turns an ear to me, unable to hear very well.  He speaks of loving fellow man and about how thrilled he is to see people taking photos which may be seen all over the world.

Leonard is worried about what will become of his mountain when he can no longer maintain it.  “I’m too weak now to lug bales of hay up the mountain,” he confessed.  But many friends drop in to help and donate paint and other needed items.  The bright green mountain and red painted symbols and signs stand out against a blue desert sky.  Cameras are clicking everywhere.

AND ON TO SLAB CITY

When World War II marine barracks were removed, the slabs remained.  In this area, near Niland, squatters set up camp and live here.  Also, RVers plop down and together they make up a strange type community.  This place was also featured in the movie Into the Wild.

We will be back to make another attempt to locate the bean goose, and will take some goodies to Leonard and donate books to the slab city makeshift library.  How lucky we are to have strange places to visit and to find adventure so close to home.

Visiting this delightful home-museum is an adventure to be enjoyed by children and adults alike.  Only a few hours drive from the San Gabriel Valley, the extensive Indian artifacts are housed in a Swiss Chalet style home built right into a mountain.  The exhibits tell the story of the area’s role as a trade corridor between the Pacific coast, the Great Basin and Pueblo societies of America’s southwest.

Howard Arden Edwards, a Hollywood set painter and self-taught artist fell in love with the beauty of the Anteloope Valley and homsteaded 10 acres at Piute Butte.  In 1928 he built his home to mirror a Swiss Chalet.

Although he constructed the structure as a home, it was built to display his extensive collection of historic and prehistoric American Indian artifacts.  The home was purchased in 1939 by Grace Wilcox Oliver, a student of anthropology.

Oliver added her own collections and converted the living quarters to exhibit rooms.  It opened in the early 1940s as the Antelope Valley Indian Museum.  A staircase built of boulders offers access to the upstairs California Hall which features artifacts from California Indian cultures.

Oliver operated the museum for more than three decades while she added to the collection.  In 1979 with the support of local groups, the State of California purchased the museum and Oliver donated her artifacts at that time.  The California State Parks designated the museum as one of its regional Indian museums in the mid-1980s.

The living room is built right into the side of the mountain as evidenced by the large boulders.  Exhibits adorn the walls. 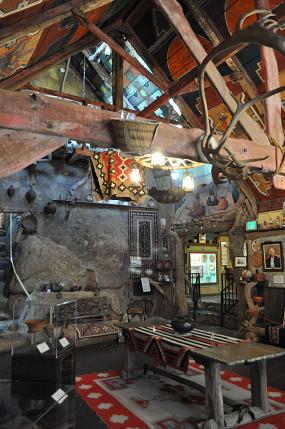 The atmosphere in the home is warm and spiriitual enhanced by Indian flute music.  Two of the downstairs rooms are named The Great Basin and Antelope Valley rooms.  Thousands of artifacts are displayed, many of them rare or one-of-a-kind items.  A docent is on hand to explain the exhibits and answer questions.

There is now a small gift shop in the museum with authentic handcrafted American Indian jewelry, kachina dolls and pottery in addiition to books and other publications on Native American history and crafts.  On our visit, a park employee staffed the gift shop because the park is lackiing volunteers who would ordinarily handle such jobs.

The museum is only open during weekends in the winter months and occasionally features demonstrations and craft making by Indian artisans.  There are several cottages on the property.  Once a few years ago, fry bread was sold and the Joshua Cottage was open with docents showing children how to make fire and forage for edible plants.  These special events have been postponed because of the lack of volunteers and funding.  Perhaps they will be a part of the program in the future.

The desert view from the museum reveals the vast lands of the AntelopeValley.  Saddleback Butte is nearby.  The museum has been the scene of many films including Wagon Train, Bonanza, The Fugitive, The Avengers, Have Gun will Travel, High Chaparral and Remington Steele.