In 1856 Charley Tyson dug a big well, and the area known as Quartzsite became a watering hole for cross country travelers between LaPaz (a town on the Colorado River near Ehrenberg) and Prescott.  It was a regular stop for U.S. Army troops which provided protection to the travelers and settlers along the route from the threat of Indian war parties.

Today Quartzsite remains a gathering place as the small town with a modest population blossoms into a haven for snowbirds and vendors during the months of January and February.  Thousands of RVs flock to the area setting up camp in RV parks, parking lots and BLM land.  Looking around, you realize probably 90 per cent of those around you are seniors

What’s for sale?  Just about everything with an accent on rocks, gems, Native American jewelry, RV and camp gear like rugs and tools.  Stacks of socks, tee shirts, scissors and tweezers, and windchimes sit next to cow skulls, marbles, dishes, rusted junk, glass and a myriad of camp chairs.  Fry bread, hot dogs and popcorn smells waft down the rows.

Quartzsite is located on Interstate 10 some 25 miles east of Blythe, across the Arizona border.  We chose to camp in Blythe at the KOA Kampground on the west flank of the Colorado river.  The campground has a spa and pool, fishing, live entertainment on Saturday nite and a free pancake and sausage breakfast!  It is a 25 minute drive to Quartzsite.

WHO IS HI JOLLY?

In 1857, a man named Hadji Ali (known as Hi Jolly) came to the U.S. from Syria along with the first shipment of camels that were to carry supplies over the desert for the U.S. Army.  For many reasons, the camel experiment failed but Hi Jolly decided to stay and lived his life in the desert as a prospector, miner, cattleman and tracker for the county sheriff.  He died in 1902 and a special memorial to him is located in the town cemetery.

Famous in these parts is Paul Winer, the owner of Oasis Book Store.  He and his wife came to Quartzsite from the East when their daughter, Celia was born and suffered from a respiratory ailment.  They settled in Quartzsite and opened a small bookstore which moved into newer, yet still primitive, digs a few years ago.  Paul is known for his many talents:  cartoonist, poet, author, musician, journalist and, not the least, a nudist.  His dress, or lack thereof, serves to shock visitors on a daily basis.

On our current visit, the Oasis Book Store was featuring an author’s book sale and signing.

As I do each year, I brought Paul a bag of fresh-picked lemons which he says he enthusiastically turns into lemonade. He is tops on my list of characters!

Sadly, Celia died at the young age of eight and the Winers established “Celia’s Rainbow Garden” on the outskirts of town.   Covering 20 acres, it has been cared for and maintained by “the hearts and hands” of the town’s residents.  They aim to make it the state’s largest free botanical garden.

Small but full of exhibits on the area’s history, this museum is free of charge.

A glimpse of our photographer, Alan Heller!

Travel to Quartzsite from March to December and you will wonder what I’m talking about.  However, in January and February it is a kick!  Check their website for the special activities such as the pow wow, parade, car shows, RV show, gem and mineral shows, hobby and craft show, concerts, etc.

The piercing scream of gulls, waves crashing on the shore, and the rumbling Amtrak coasting along behind us, Doheny Beach in Southern California treats me to a symphony of surprisingly soothing sounds.  In contrast to the stone quiet of the desert, we enjoyed a few days in the sun at Doheny State Beach campground.

There are many decisions to make throughout the day – but at sunset, everyone heads for the shoreline to watch the sky and water change colors as the sun sets.  We watched each night but never did get a glimpse of the blue flash.

Spending a few hours at the Mission of San Juan Capistrano is relaxing and educational.  There are gardens where you can sit and enjoy the peaceful surroundings.

Replicas of the living quarters of the missionaries:

And a wonderful exhibit on the journey of Lewis & Clark:

Across from the Mission is Old Town San Juan Capistrano and across the Amtrak tracks is OLD OLD TOWN SAN JUAN CAPISTRANO.  The street is lined with gardens and old homes which have morphed into little cafes, boutiques and art galaries.  It reminds me of the art colony in Santa Fe.  We ate at the Ramos House, recently subject to one of Huell Howser’s shows.  Huell touted the chef at this cafe, and we could see why.  The patio dining is just yards from the tracks.

Alan ordred a bloody mary, the restaurant’s signature drink.  It was topped off with various garnishments, notably a crab claw and a deep fried deviled egg. 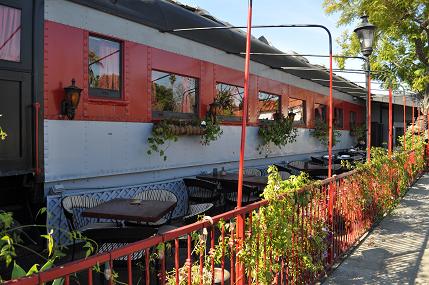 There is much to do based at Doheny Campground.  We visited the Surf Museum in Oceanside and enjoyed an extensive and beautifully done exhibit on WOW – Women on Waves, giving a history of women surfers and also the evolution of women’s swimsuits from the old wool-dress types to the thong bikini.  We walked the pier at Oceanside and enjoyed the upstairs patio dining room overlooking the ocean.  In San Clemente we had clams and cocktails on the pier, and watched the Lakers lose to Dallas in the bar at Harpoon Henry’s in Dana Point.  It was a relaxing and educational visit.  We plan to return maybe this summer, only with a reservation!  (Reserve State Park campsites 7 months ahead of time through ReserveAmerica.  On February 1, it is time to make reservations for August!

At the foot of the Providence Mountains in the East Mojave Preserve is Hole-in-the-Wall campground.  Its biggest asset is nothing; nothing but stillness, cactus, sweeping desert vistas , and walls riddled with natural holes.  At night there is nothing in the sky but brilliant stars.  In the morning, there is no sound but for the cry of a quail or call of a cactus wren.  There is nothing to block the view of the sunrise and the glow off the mountains as the first rays penetrate the dark. 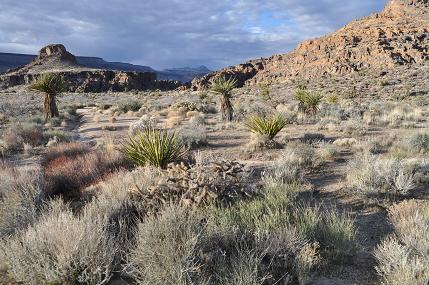 We arrived to find only 3 of the 35 campsites occupied.  The park is in excellent shape, under the care of the National Park Service.  We met the camp host who was doing a 4 month stint from his home in Canada.  He joined us at our morning campfire as did a fellow camper from Los Gatos who was traveling alone towing his $32,000 16 foot airstream.  We shared stories of our adventures.

One reason for traveling to the area was to visit Mitchell Caverns to get up to date information for an article I was writing.  We were surprised to find the caverns were closed.  Although adjacent to Hole-in-the-Wall and within the Preserve, the caverns were taken over from Jack and Ida Mitchell in the 1950s by the State and due to “budget cuts” they are temporarily closed.

To reach Hole-in-the-Wall take the Essex Road turnoff from I-40, or for Route 66 buffs, take the Mitchell Caverns road out of the town of Essex.  The Hole-in-the-Wall road, now paved, is 10 miles to the campground.  We paid $6 a nite with our Golden Age card, otherwise the fee is $12.  There is water, a dump, pit toilets, tables and fire pits.  There is a ranger station but you must bring your own fire wood, etc.  We enjoyed chilly but still weather, missing the winds which can be devastating at times.

SIDE TRIPS IN THE AREA: 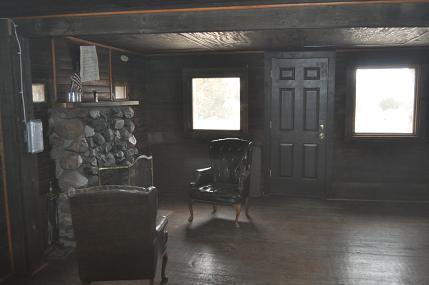 We made a stop at the Rock house, built in the late 1920s by Bert Smith who came to the area for weather more suited to his ailments.  Later the house was occupied by Carl Faber, an artist, who enjoyed many visitors to his studio.

A trail from the house passes the remnants of an old copper mine, and then traverses down the hillside to Rock Springs where a U.S. Army post was established in the late 1860s. This was one of a string of posts erected to protect the mail and supply route along the  Mojave Road.  These posts were generally established around water supplies, such as Rock Springs. 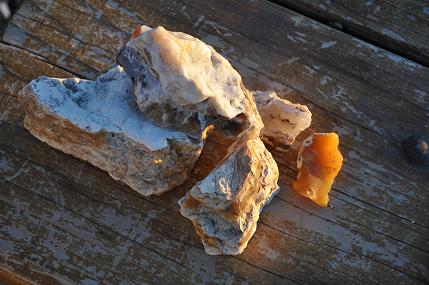 Taking the Wild Horse Canyon loop road, we turned off to an area where some years ago Alan had found  Chalcedony  – a variety of quartz. He parked the car, walked about 50 feet and came back with a handful of the rocks!

Continuing to Mid Hills Campground, there was sad evidence of the destruction caused by a raging wildfire several years ago.  The campground remains open but many of the sites are surrounded by charred junipers.  Patches of snow remained and few campers were braving the elements.

We looped around to Lanfair Road and drove by Goffs, gassed up at Fenner ($4.35 a gallon), drove on Route 66 to Essex and then up Jack Mitchell’s road back to camp.

OFF TO JOSHUA TREE VIA AMBOY

Homebound  we drove along Route 66, stopping in Amboy to check up on the status of the town which is being renovated by the Juan Pollo czar, Alfred Okura.

For some reason Alan was enamored with the following photo:

ON TO JOSHUA TREE LAKE (?) AND WILLIE BOY’S SALOON

In the town of Joshua Tree, 5 miles east of Hwy 62, is Joshua Tree Lake, better described as a large pond.  The RV park has hook ups for RVs and also tent sites.  There was a pool and spa but they are out of service.  You can fish in the lake and the camp host rents poles and sells bait.  It was actually a quiet and relaxing camp.  The temperature never went over the 50s so we did fine.  I don’t think I’d like to stay here in the summer (unless they open the pool).

WILLIE BOY’S SALOON AND RESTAURANT OPENED A FEW WEEKS AGO IN MORONGO VALLEY.  WE ATE THEIR STEAKS AND DRANK THEIR ALE AND ENJOYED THE AMBIENCE.

The saga of Willie Boy and his sad fate were recreated in a movie called “Tell Them Willie Boy Was Here.”  Although the details of this historical event are murky and vary from story teller to historian, the gist is merely this:  In 1909 Willie Boy (played by Robert Blake), a Paiute-Chemehuevi Indian  ran off with his forbidden love, Carlota, but not after killing her father.  He was chased by a posse (Sheriff Robert Redford).  In the chase Carlota was shot dead.  Some say Willie Boy did away with her, others insist it was a bullet from the authorities.  In the end, Willie Boy died from a gunshot. Did he kill himself or was he the victim of the hunt? The story goes his body was cremated and he was buried in Johnson Valley near Landers.  We have hiked to his grave which is surrounded by a barb wire fence and marked with a plaque.  The event has historical value because it is said to be THE LAST WILD WEST MANHUNT!