Ready to go at 8 a.m. – the enthusiastic off-roaders hit the dirt for a day of exploration! (Our fearless leaders below). 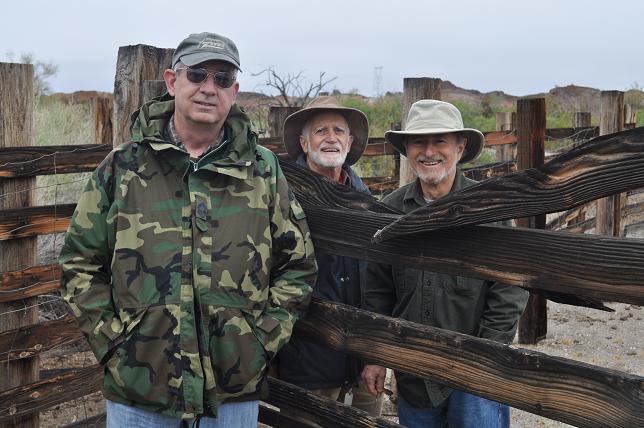 Under a drizzly sky and sometimes gusty winds, we arrived at the West Well Petroglyphs.

The West Well corral was very photogenic.  And since we were camping and Alan missed his morning bath, he jumped in for a soak (below).

And we all take off for the next discovery.

There were several photo stops for flowers.  The ocotillos were crowned with flaming red/orange flowers, probably blooming as a result of the recent storm.

NEXT WE GATHERED AT THE LOST ARCH INN.

The Lost Arch Inn at Brown’s Camp was a cabin built by Charley Brown and his mining partner Jesse Craik. The cabin, which remains mostly intact, faces a natural rock arch that is the legendary marker for a rich gold placer. According to The Desert Magazine, Charley didn’t have much faith in the Lost Arch legend. “With gun, canteen and blanket he had taken long, lonely prospecting trips into the Turtles and he had found scores of arches.”

“Today, following nearly a century of harsh sun and wind, the severely weathered Lost Arch Inn stands surrounded by the rusted remains of mining implements and tin cans. If a visitor has an urge to tidy up “the field of junk,” the urge must be overcome.  The Archeological Resources Protection Act of 1979 specifically forbids gathering of artifacts more than 50 years old. Instead, the BLM intends the site to be a “discovery field” for generations to come.” 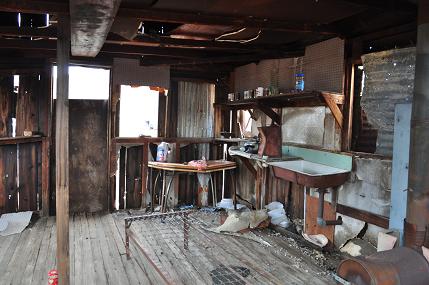 Rusted cars scattered around the area were magnets for the guys and their cameras.  Alan liked the one with the suicide door. 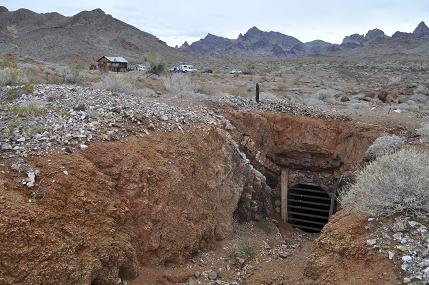 We figure the above cave is where the dynamite was stored. 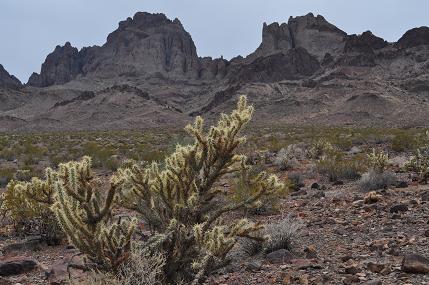 With binoculars the arch may be seen – no longer lost!

It was a fun-filled day with lots of discoveries.  The next morning the Needles Historical Museum opened especially for our group.  It is located across the street from the El Garces Railway Depot.  Once this was a busy depot which housed a Harvey House staffed by the famed  Harvey Girls.  Today it has fallen into disrepair but is slowly undergoing renovation. 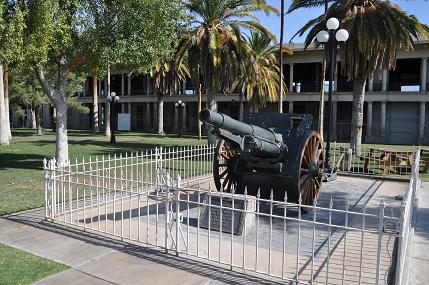 Needles is named for the needle-like peaks that loom above the area.  It is the Route 66 gateway to California.  The town embraces its Route 66 heritage which is evidenced by the many businesses sporting the Route 66 sign logo.

On our own we discovered some legendary sights in the area:

THE TOPOCK MYSTICAL MAZE.  We drove around dirt roads in search of this ancient maze, and finally found it!

“Within a stone’s throw of busy Interstate 40 near Needles, Calif., a remnant of an ancient American Indian religious site occupies about 15 acres of wind-scoured Mojave Desert. Known as the Topock Maze of the Mystic Maze, the 600-year-old geoglyph consists of intricate patterns of many parallel paths. On the ground, visitors discern undulating parallels following the contours of the desert. From space, satellite images reveal the man-made intricacies of design”

Driving toward Kingman on a Route 66 alignment, we stopped at the Dinesphere.  It was built in 1972 as a restaurant.  The dome is not open at this time, but we were told it would open this summer.  In the meantime a bungalow serves as a gift shop..  Alan found just what he had always been searching for:  an alien in a jar.

We headed for the burro friendly town of Oatman with a stop at Cool Springs.

After lunch at the Old Oatman Hotel, the walls of which are plastered with dollar bills, we mosied around town dodging burros. We escaped from the town just as a shoot out began.

We headed to the Avi to make our donation to the Native Americans, stopping on the way at a site we had not been able to locate for years.  We finally found the Twin Intaglios.  There is a painting of them on the wall at the Avi.  Someone at the Needles Museum jotted down the directions. 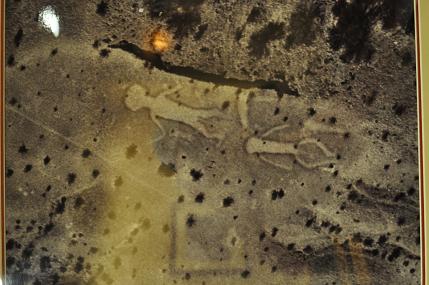 We enjoyed all the discoveries on our desert adventure, but it doesn’t end here.  We drove through Desert Center and made the obligatory stop at the Patton Museum.  We got a little lost but found this sign which helped us find our way:

We stopped for the night at the Salton Sea.  There is no one here in the North Shore Recreation Area campground.  The place is deserted but for the abundant wildlife.  We sit near the shore and watch a multitude of bird life.  White pelicans feast on tilapia.  Black crowned herons stand silently on the shore in stalking mode.  As the sun sets the sky and water turn caramel color and as darkness envelopes the area, dozens of night hawks fly erratically.

The trip has not come to an end.  We will head for Palm Springs where we have tickets to the Crosby Stills & Nash Concert.  There is more than one kind of adventure in this desert!