We hit the road on a mini Route 66 trip to revisit our favorite sites and introduce my sister, Karen, to the lure of the Mother Road.  We even discovered some new adventures on the way. After a visiting the Victorville Route 66 Museum we stayed a night at the Avi in Laughlin to make our usual donation to the Native Americans and then strolled through the burro-friendly Route 66 town of Oatman.

As is typical along Route 66, we ran into dozens of motorcyclists visiting from Brazil.  We had seen the same group at Amboy the day before.  They were buying up armfulls of souveniers.

As we tried to check in at the Grand Canyon Railway Hotel but they informed us our reservations were at the historic Grand Canyon Hotel which is located right on Route 66.

Turns out it is a two-story European boutique type hotel opened in 1821, the oldest hotel in Arizona.  There are no televisions and many rooms share bathroom facilities.  With no elevator you need to schlep your luggage up a dark staircase.   Our obvious disappointment prompted the owner to take us next door to the “carriage house” which contains two new suites, beautifully decorated, with private baths.  It is decorated with a lovely mural.

We were very happy in our suite in the Carriage House.  Since it is located right in town, we were able to stroll along Route 66 and enjoy all the shops, attractions and restaurants.

This lovely hotel is embraced by Route 66 and the railroad tracks.

Every inch of this hotel is a joy.  From the rooms to the sitting rooms, the gardens, the excellent Turquoise Room Restaurant, the martini bar, the fountains, not to mention the eclectic artwork.

You can sit in the ballroom and enjoy a blazing fire, Tina Moin’s paintings, comfy chairs and couches, game and game tables, look out over one of the lovely gardens, read a book.

Upstairs is a gallery featuring “political artwork.” And, of course, you can sit out back (which was once the front) and watch the trains lumber by, only a few feet away.

A favorite past time is settling on the patio and waving at the trains – drink in hand!

The hotel owns a ranch where they grow much of the food served in the Turquoise Room.  The corn maiden breakfast is wonderful – and the corn and bean chowder was exquisite!

With the help of the hotel staff we rounded up some guests and townspeople and gave a presentation based on our book “Life on Route 66.”  Small but interested crowd.  Even sold a few books.

One of Tina Moins paintings depicts the last of the restaurant’s Harvey Girls who passed away recently.  She is holding a cup of tea.

METEOR CITY AND THE CRATER

Meteor City is one of the last trading posts between Flagstaff and Winslow.  Nearby is the famed crater:

It can be viewed as “just a big hole” but its impact (excuse my pun) becomes significant when you watch the movie or peruse the exhibits explaining its origin and affect on the earth.  The entrance fee is a bit steep.

There is an extensive set of exhibits, a nice gift shop, a Subway restaurant, and hiking trails along the rim, often the subject of guided tours.

2 GUNS AND THE APACHE DEATH CAVE 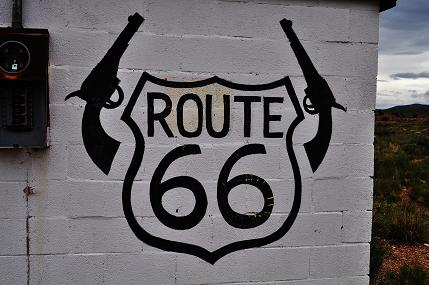 Why did we not know about this place before? It sits on Route 66 between Winslow and Flagstaff?  Exit I40 at 230.  Only yards from the highway you’ll find remnants of a very strange endeavor in addition to a cave which was the site of a massacre of untold proportions.

It is eerie to wander through the ruins of this “ghost town,”  a place that begs to be photographed.

It was once a settlement, then the site of the Canyon Store (1924) complete with a campground.  In 1925 local legend Harry “Indian” Miller built an extensive stone structure on the north rim of the canyon and constructed a zoo with wild animal cages.

Many cage ruins are scattered about the area. 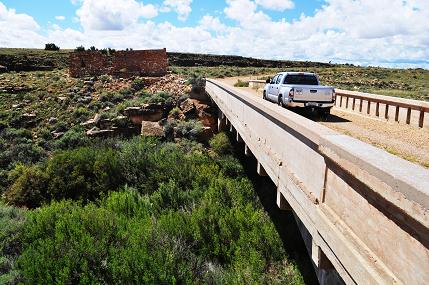 A bridge spans the gorge and ruins are found on both sides. The cave is below.

Across the gorge from 2 Guns you can glimpse the opening of the so-called Apache Death Cave which reportedly penetrates the earth for nine miles.  History tells us that Navajos massacred the Apaches in the “so-called Death Cave in the summer of 1878.”

After more than 50 Navajo men, women and children were slain, the Navajo warriors tried to track the Apaches but lost their trail.  A small party of searchers checked out Diablo Canyon and were surprised to hear voices coming from the ground.  The Apaches had hidden in caves so large they kept their ponies inside.  The Navajo built a big fire at the cave entrance and the chimney effect pulled smoke in and the Apache suffocated. Superstition continues to envelop this area and Native Americans stay away.

The Death Cave and 2 Guns area is not yet finished!

In the heyday of Route 66, this area became a famous  tourist stop but was fraught with obstacles.  After the demise of the zoo, many people tried to revive the venture, but failed.  It was all but destroyed by fire in the 1970s.  A recent on-line entry says that actor Russell Crowe bought the “town” last year and will use it as  a filming site.

We stopped at this UFO site thinking they would buy a copy of our book since a photo of it appears on the cover.  The son of the owner manning the store was not in the least bit interested in us or our book.

As you can see there was a horde of motorists stopped to take photos of the “bra tree.”

There is much to see along Route 66.  I didn’t even mention above many of the adventures we enjoyed in Seligman, Flagstaff, and then, off the road, to Havasu and Parker.  You need not travel all the way to Chicago as there is much to enjoy in our own backyard!

What to do?  There are many hiking trails and the oaks beg to be climbed.  There is fishing in the lake.  Out of the campsite there is a one-mile trail to the “lake.”

The lake is a mile from the campground.  You can drive there, but we chose to hike.  The last leg takes you down hundreds of stairs and the lake is disappointing – more like a big pond.  It is a naturally formed lake fed by snow melt and springs.  It is lined with reeds but if you can get your line out past the reeds, they say there are large bass just waiting to be caught.  No watercraft is allowed.

Meet Adam Samrah!  For years he has lived in the canyon manning his cafe which is known for its breakfast burritos, banana bread and fudge brownies.  In the 2002 Curve Fire which heavily damaged this area, he barely escaped with his life.  Only by riding out the flames while immersed in a pond with his friend was he able to escape death.  Not scared out of the area, he remains, greeting visitors and providing necessities.

All the way up Highway 39 we kept noticing how dry and steep the canyon appeared and voiced our concern about the fire danger. Sure enough, a few days ago, less than a week from our camping trip, we spotted smoke about 3 p.m. and drove over to Azusa by Costco to pinpoint the source. As we feared, it was in Azusa Canyon, a short ways south east of Crystal Lake.  At this time the campground is closed.  When it reopens after the fire is out, it will remain open until December 21.  It is first come-first served – no reservations.  The weekdays are peaceful but since it is so close to civilization I fear the weekends may be crowded and rowdy.  You can get up to date information on their website:  www.crystallake.name/index.htm.