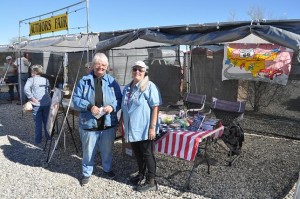 Promoting our book Life on Route 66: personal accounts along the mother road to California, we did a book signing at the Oasis Book Store in Quartzsite. Not a lot of sales but met some fellow authors and had a fun day.

Had the pleasure of meeting Mrs. Winer, the wife of the famous book store owner. They seem an unlikely couple, but hey, they’ve been married for decades! 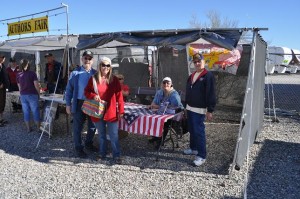 John and Dottie Van Doren stopped by, and to the right Norm Swartz. The weather was finally warming up and Quartzsite was alive with shoppers from border to border. The scant population of this town is about 3,000 until January and February when it swells to a million, mostly snowbirders thawing out. 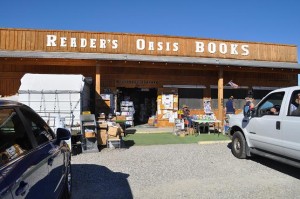 Paul, the owner, could not have been more generous. He invited the authors to stay as long as they wanted, sign and sell their books and insisted we keep our profits. Paul is an entertainer having appeared on the Jay Leno show. He is a poet, a journalist, and most obvious, a nudist. Only in Quartzsite! 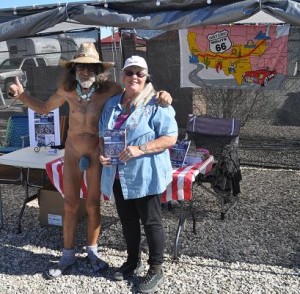 We love Quartzsite, but it was time to move on. We drove to Ajo, then Why, and on to our favorite desert campground: Organ Pipe Cactus National Monument. It was quiet, and the local activities such as ranger talks and walks didn’t start til the next week. But we love the solitude and the brilliant sunsets. It is also a birdwatcher’s paradise. It borders on Mexico and is the access point for crossing the border at Lukeville, gateway to Sonoyta. 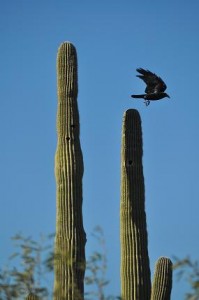 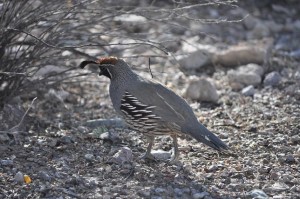 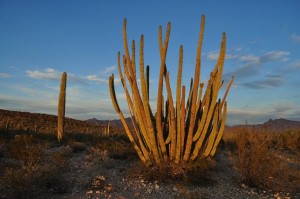 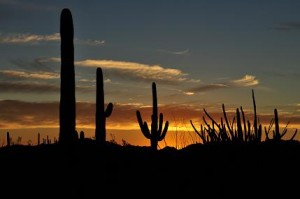 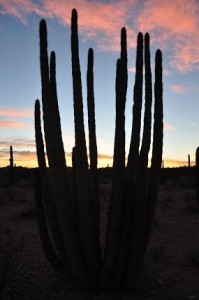 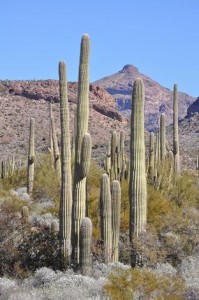 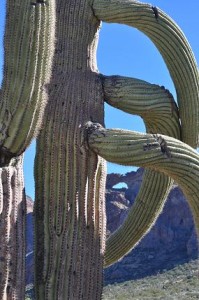 To see a double arch is a thrill! 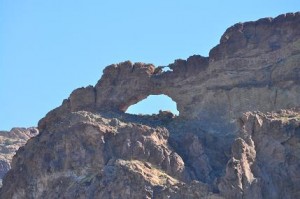 Sadly it was time to head home by way of Yuma. There is more in Yuma to see than one would think. We ate at Lute’s Casino. No, it isn’t a casino, it is a restaurant of Huell Howser fame. We enjoyed the quirky atmosphere and toasted Huell.  A few of the other spots we visited were the Crossing and the Yuma Territorial Prison, 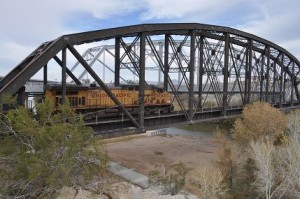 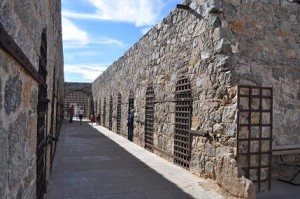 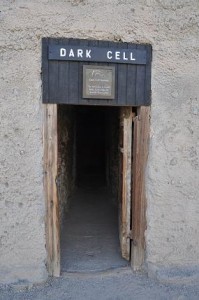 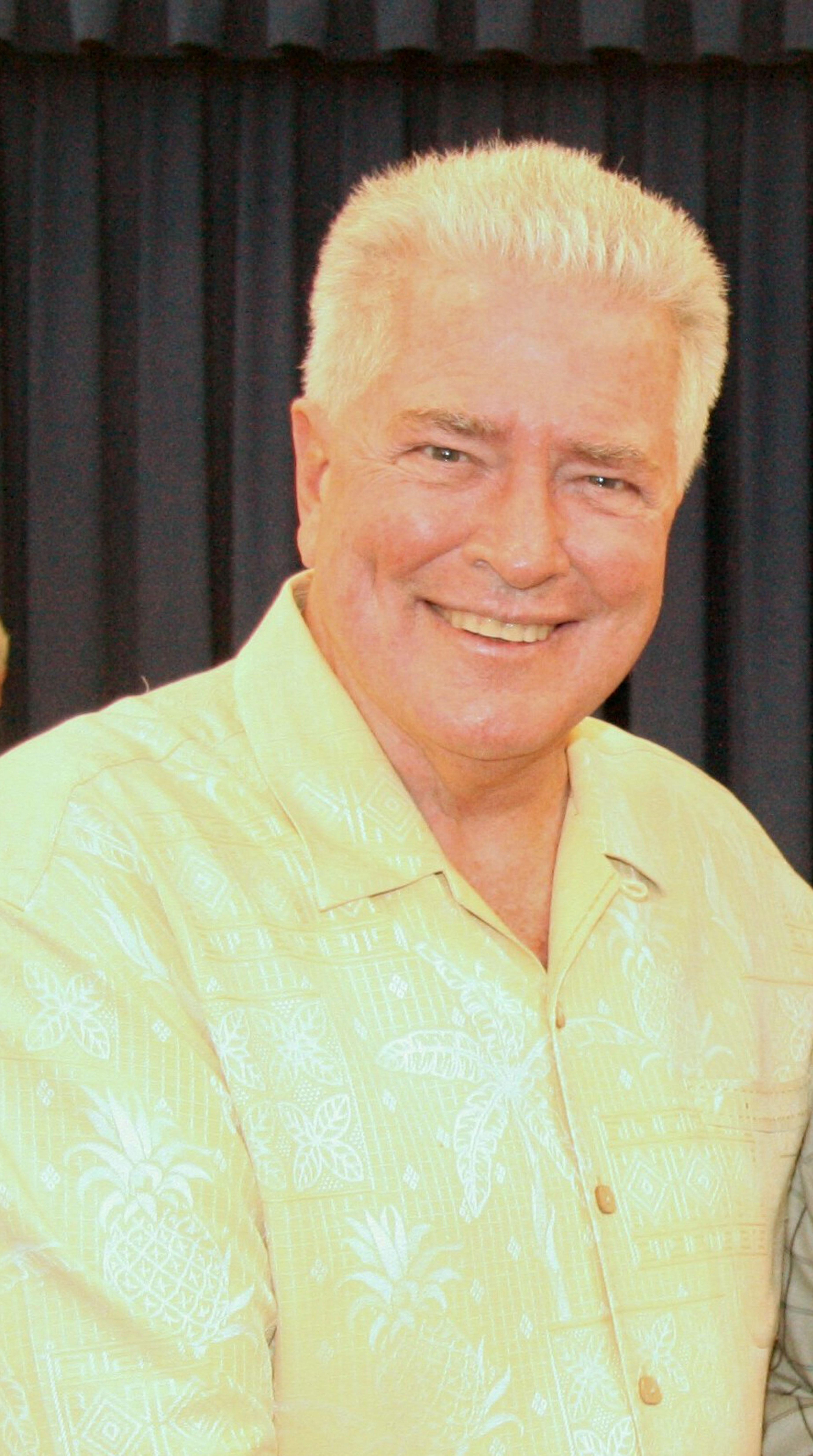 It was with great sadness that I learned of the passing of Huell Howser (1945-2013), a hero to many of us in California. He dug deeply into our “gold” and spread his nuggets of knowledge of many well known and little known landmarks in our state. Some grumbled that he had not visited their little historical spot, but he probably would have done so but for his untimely passing.

A few years ago I watched him as he interviewed historical persons at the grand opening of the Kelso Train Depot. It was truly a two man show: Huell and his cameraman. He had no “go-fers” rounding up interviewees. If they weren’t at the appointed spot at the scheduled time, he personally would take off running around looking for them. And when the interview began, he was as calm and prepared as one could be.  When his guests spoke, he became more and more engaged and excited, listening carefully to their accounts of the depot in its fledgling years, and asking question after question. It was obvious he had done his homework. He made everyone feel at home as if he were a visiting uncle, and when the interview concluded, we all knew much more about the history of this historical depot.

Huell’s shows reminded me of the way Jacques Cousteau brought the mysteries of the oceans into our homes on Sunday nights, teaching us about oceanography in simple terms. In that same manner, Carl Sagan took the scientific and complex workings of the universe and strived to impart his knowledge to us in simple terms. Both of these men, like Huell, were passionate about their subjects and made it their life work to enlighten the general public.

A few years ago, Huell visited our town, giving a talk at Westminster Gardens to a record crowd which required numerous seatings. The audience fell spell bound, savoring stories from a man they held in high esteem. We were honored to have him as a guest in our town.

A recent story giving tribute to Huell reported that he was once asked what he would do if he were tied to a 5 mile radius for his features. He essentially replied “no problem.” I concur. Duarte is about that size and stories abound. As a columnist I have been asked how I find things to write about. My reply has always been that it isn’t difficult to find a story, the challenge is to decide which story to do next.  In Duarte, as in every town, there are gems just waiting to be shared.

The characters, events and history of Duarte are all dear to my heart, as I have authored this column for more than twenty years. There are Duarteans who have come and gone, moving on to new surroundings. There are those who filled vital roles in the development of our town, and have since passed away. Their stories and photos have been chronicled and are archived at the Duarte Historical Museum. Later this year many of my past columns will be published in a book by HistoryPress.

For years I have admired Huell’s tenacity, enthusiasm and fairness in bringing to the public a first-hand look at places, people and events we may never have known about.  He has been an inspiration to me and to his audiences. No one can emulate the man; his personality is so uniquely his. However, we can all learn from his legacy to look below the surface and appreciate people and places that are silent, hiding gems that have not yet been discovered.

I take my hat off to Huell Howser, mourn his death, and to the man and his long line of successes I say: “That was amazing!”