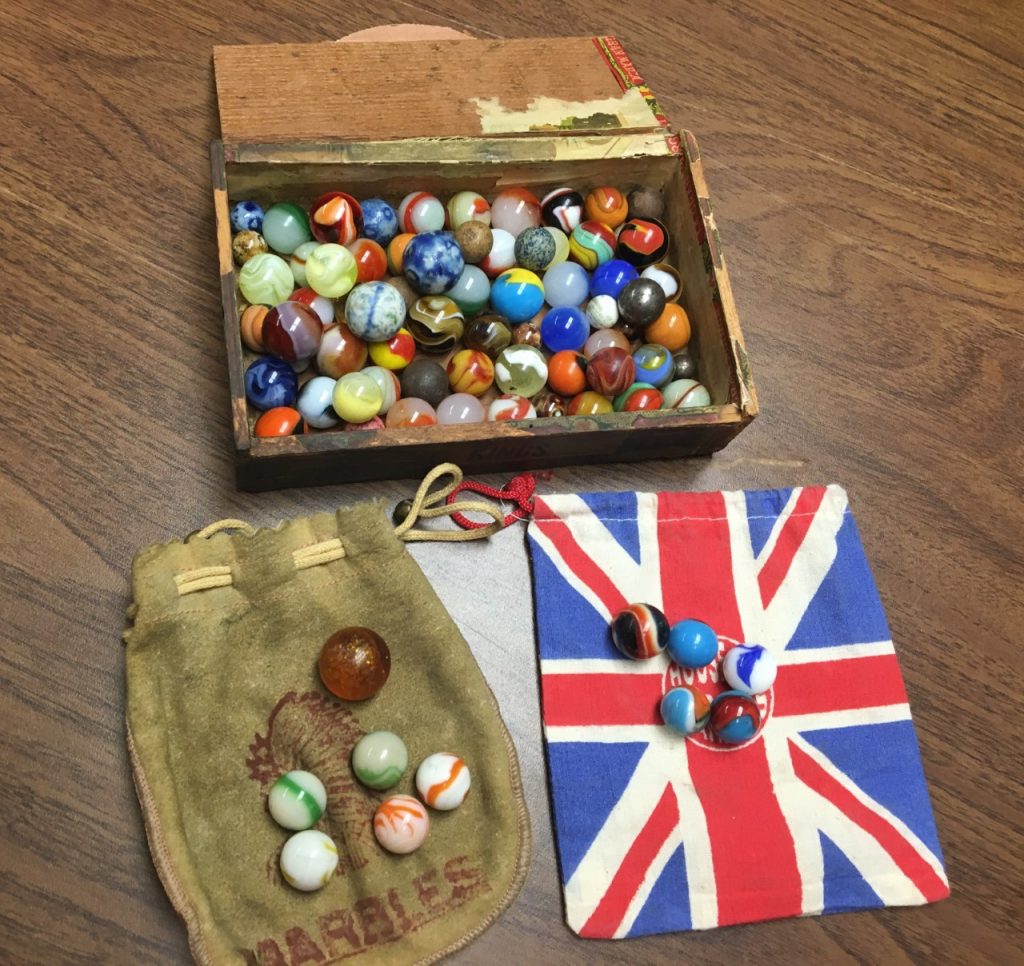 Broken, faded and tattered, the box contained a few dozen marbles. The owner, Duartean Nick Montalvo, beamed as he lifted the lid revealing its contents which he proceeded to remove one by one while reciting the history of each. The box is known as a “time capsule” and the handmade marbles represent sixty years of marbles, a multigenerational collection going back to the 1840s up to the 1930s, handed down from fathers to sons for more than a century and a half.

At first glance they appear to be just marbles, but look closely and their personalities emerge. Nick explains each one in almost a reverent manner. They are like his personal friends and he treats each with respect. “Here is a Bennington, made of crockery,” he says. “And these are called ‘Chinas’ as they are made of porcelain and hand painted.” Among them is an Indian Blanket marble made in Germany, a latticing swirl which reveals a net of colors inside when under light, and a Lutz, sparkling with gold flakes. Glass hand-made marbles were cut from a cane of glass with a cup to make the round shape. Their tell-tale mark is a flat spot on top.

Machine produced marbles were made in Akron Ohio in the 1890s and as an example he introduces a promotional marble which sports the name Coca Cola. M.F. Christianson Company was the largest company producing machine made marbles until it went out of business in 1936. The Vitro Marble Company continued in business featuring character marbles such as Superman, Batman etc.

After WWII, there was a surplus of machines from which ball bearings were extracted for use as marbles.

And where do marbles nestle? Stuffed in a pocket is one way, but marble bags became popular and these too are in Nick’s collection. His favorite is a leather bag from the 1950s made by the House of Marbles. Nick says serious marble collectors need a jeweler’s loop or magnifying glass, and glass plant frogs on which to display the marbles.

Wild about marbles since childhood, it was a passion in which his daughters had little interest. Enter his son, Michael, 8, a third grader at La Fetra School in Glendora. It is a bond between the two and yes, they play! The most popular game is “ringers.” Each player gets 13 marbles which they place in a five foot circle. The opponent shoots a marble into the opponent’s circle in an effort to shoot their marbles out of the circle. For each marble shot out, the shooter gets 5 points. The first one to reach 50 points wins. In some games the players may choose to play “keepsies” where the player who shoots the marble out of the circle gets to keep it. If a player knuckles down over the circle line, he loses his turn. A marble player is called a “mibster” and marbles are often called “mibs.” Nick likes the way the game brings players face to face unlike the modern digital games.

Although his collection contains marbles from the 1800s, much older marbles exist. They have been found in Egyptian tombs, in Native Indian sites, in Druid burial grounds, and in many areas throughout Europe.

Nick has lived in Duarte since 1973. He went to Valley View School, Immaculate Conception, La Salle, and graduated from Duarte High School in 1983. He attended Art Center College of Design and Citrus College. His artistic side has served him well in construction work, building props for the movie industry, and in his personal life. The marble collection he shares with his son has grown over the years thanks to his constant visits to antique stores, estate sales, thrift stores and flea markets.

This historically significant collection is on display through November at the Duarte Historical Museum, 777 Encanto Parkway, in Duarte.

JOIN IN THE COMPETITION.  FOR ADULTS AND CHILDREN ALIKE – OCTOBER 15, 11 A.M. AT THE MUSEUM IN ENCANTO PARK:  PLAY A GAME OF KEEPSIES AND SHARPEN YOUR MARBLE SKILLS!  LEARN ABOUT THE HISTORY OF THIS GAME WHICH WAS A MAINSTAY ON THE PLAYGROUND DURING PRE-DIGITAL DAYS.  OR BRING YOUR JACKS OR PICK UP STICKS!

BELOW NICK MONTALVO AND HIS SON MICHAEL INSTALL THEIR MARBLE EXHIBIT AT THE MUSEUM.  THEY PLAY OFTEN AND HAVE GREAT RESPECT FOR THE HISTORY OF THEIR COLLECTION. 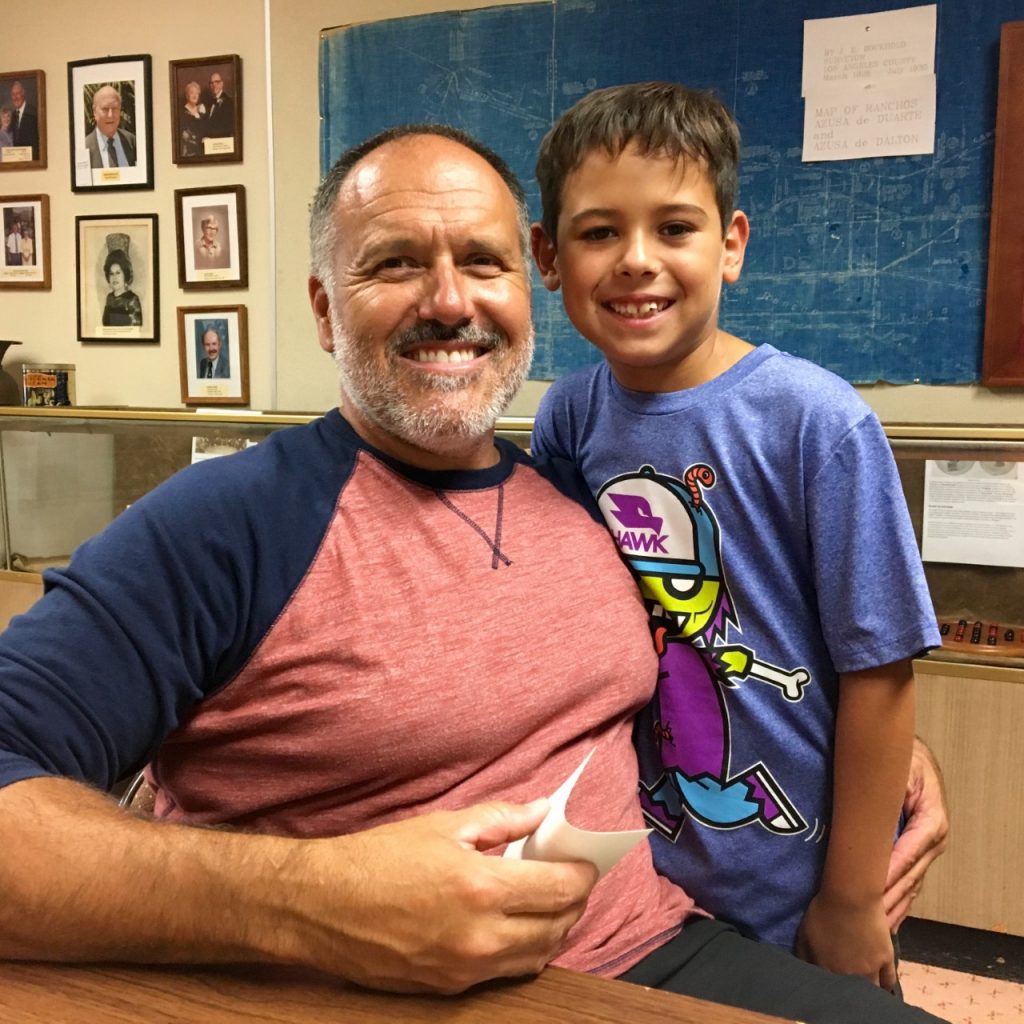 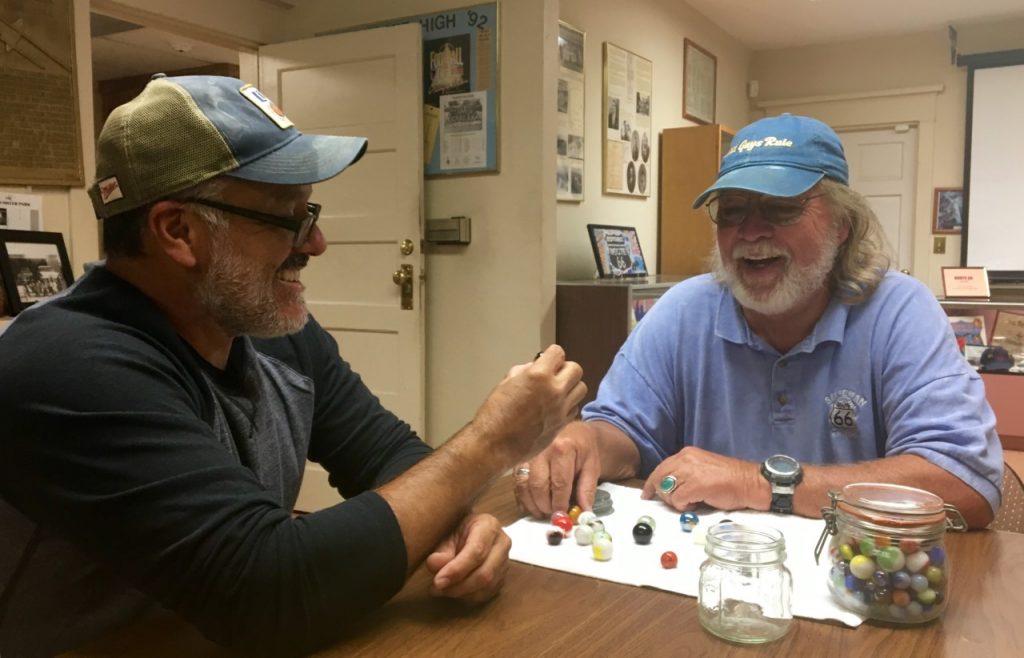 ABOVE WE WITNESS A SERIOUS DISCUSSION ON MARBLES BETWEEN NICK MONTALVO AND ALAN HELLER. DID I HEAR A CHALLENGE INVOKED THERE? 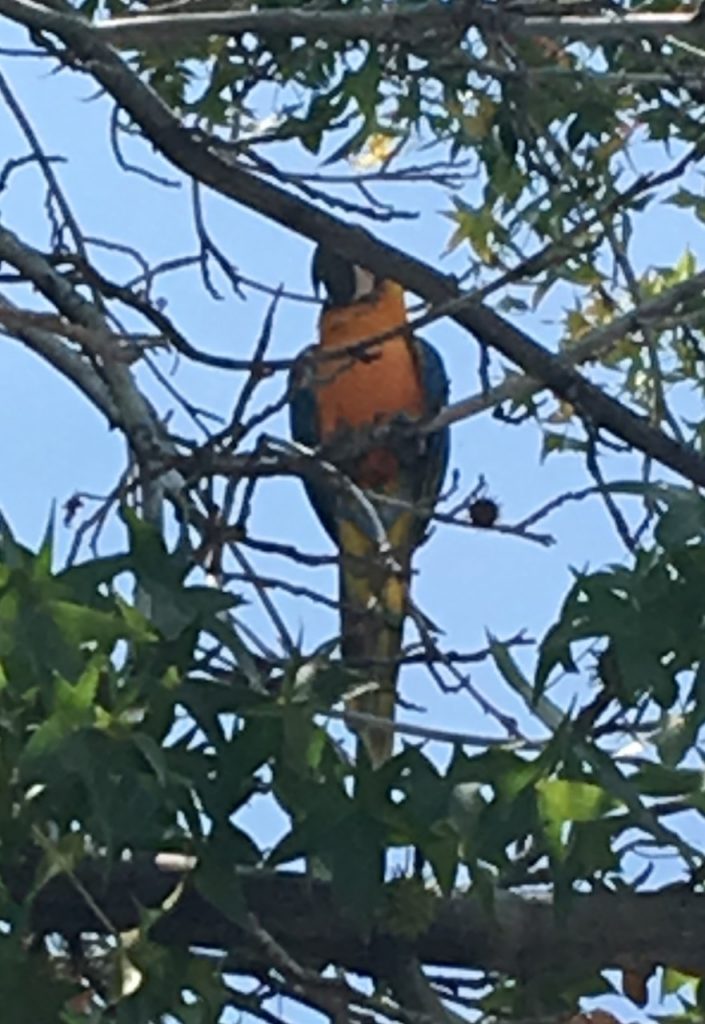 This blue and yellow mac caw (Ara araurana) flew off its owner’s shoulder near the San Gabriel River west bank by Duarte’s Encanto Park.  Dozens of locals set out to help locate the escaped bird and some posted the situation on Nextdoor.com, the phone app where neighbors keep in touch digitally concerning local issues.  Amazingly, the bird was spotted several times, finally settling in a tree at the corner of Fish and Mel Canyon.  Neighbors gathered and attempted to lure it down with crackers and kind words, but not speaking English, the escapee countered back in a foreign language and rebuffed the bribes.  A man pulled up in a truck, extracted a ladder and attempted to reach the bird unsuccessfully.  It flew off and circled the area, a graceful and magnificent sight!

Later the bird’s owner checked her phone and headed to the area.  As she arrived, the bird flew down and landed on her shoulder.  She left immediately.  Happy ending.  These MacCaws are super expensive and are seldom allowed to escape.  When they do, the owners set out to find them and protect their financial and emotional investment, or someone else finds it and takes it home.

It was a fun and exciting day in this Fish Canyon neighborhood of Duarte.