FOLLOWING IS VENDOR APPLICATION.  IF YOU WISH TO PARTICIPATE, PLEASE PRINT THE APPLICATION, COMPLETE AND MAIL WIITH CHECK.  DETAILS WILL BE PROVIDED PRIOR TO THE EVENT..  THIS IS A GREAT LOCATION, ON ROUTE 66 IN THE HEART OF DUARTE.  WE WILL OCCUPY THE STATUE PLAZA AND THE GRACE FELLOWSHIP CHURCH PROPERTY.  THE FAIR IS SPONSORED BY THE DUARTE HISTORICAL SOCIETY & MUSEUM.  ANY PROFITS FROM THE VENDOR PARTICIPATION FEES WILL SUPPORT THIS ALL-VOLUNTEER MUSEUM.

VENUE:  We will occupy the area around the Andres Duarte Statue on Huntington Drive (Route66) across the street from City Hall, and the adjacent property of the Grace Fellowship Church.  Church and street parking are available for customers.  Vendors will unload then park in the city parking lot on the south side of Huntington, returning via crosswalk.

The Craft Fair committee will provide helpers, unleash a publicity campaign and organize the event.  Proceeds support the Duarte Historical Society & Museum, an all-volunteer non-profit museum dedicated to the preservation of local history.

MAIL check payable to the Duarte Historical Society & Museum, c/o Claudia Heller, 277 Opal Canyon Road, Duarte CA 91010, together with this completed application. A confirmation will be sent with more details.  No applications will be considered after November 30 or after 50 applications have been confirmed whichever comes first. 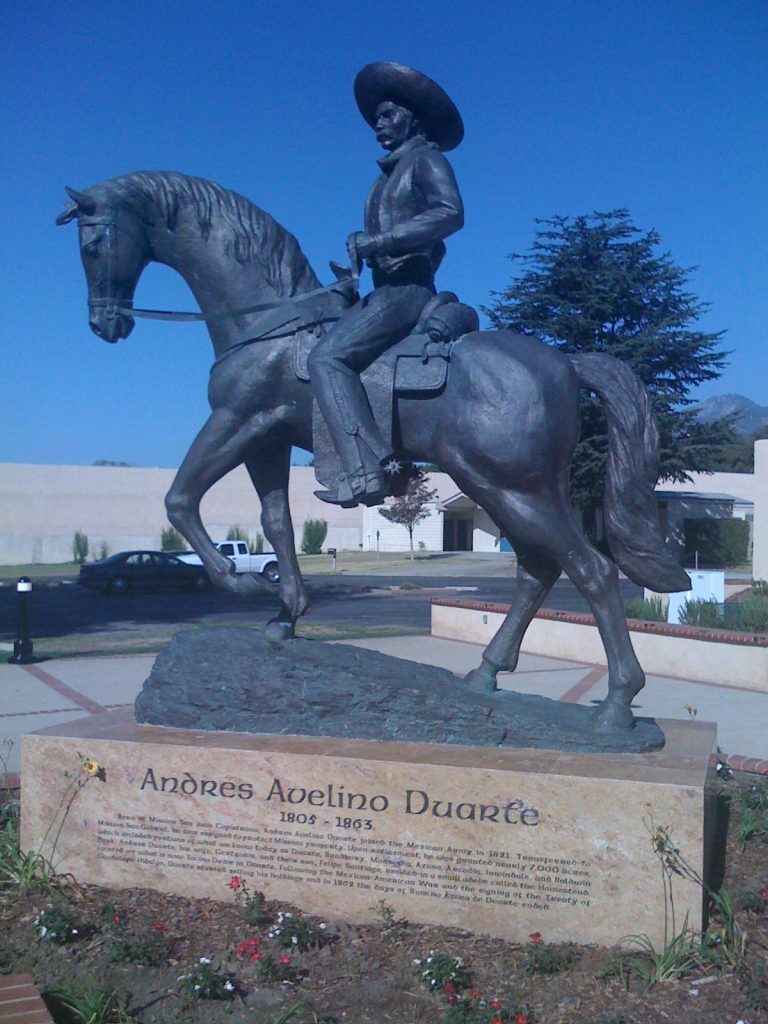 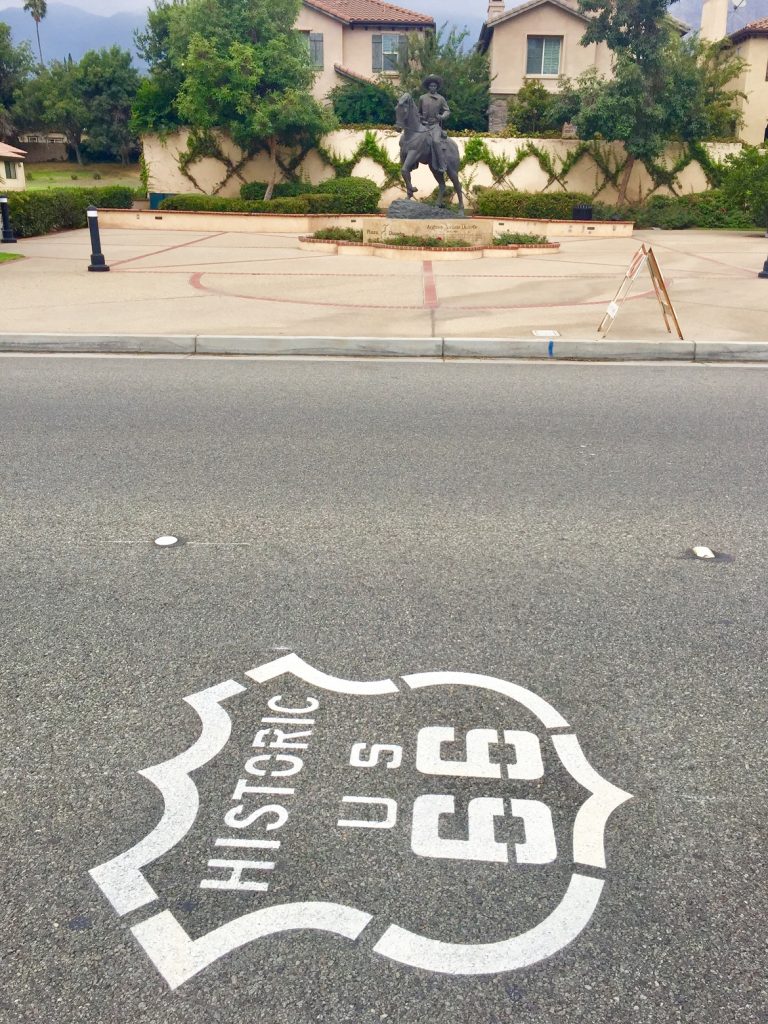 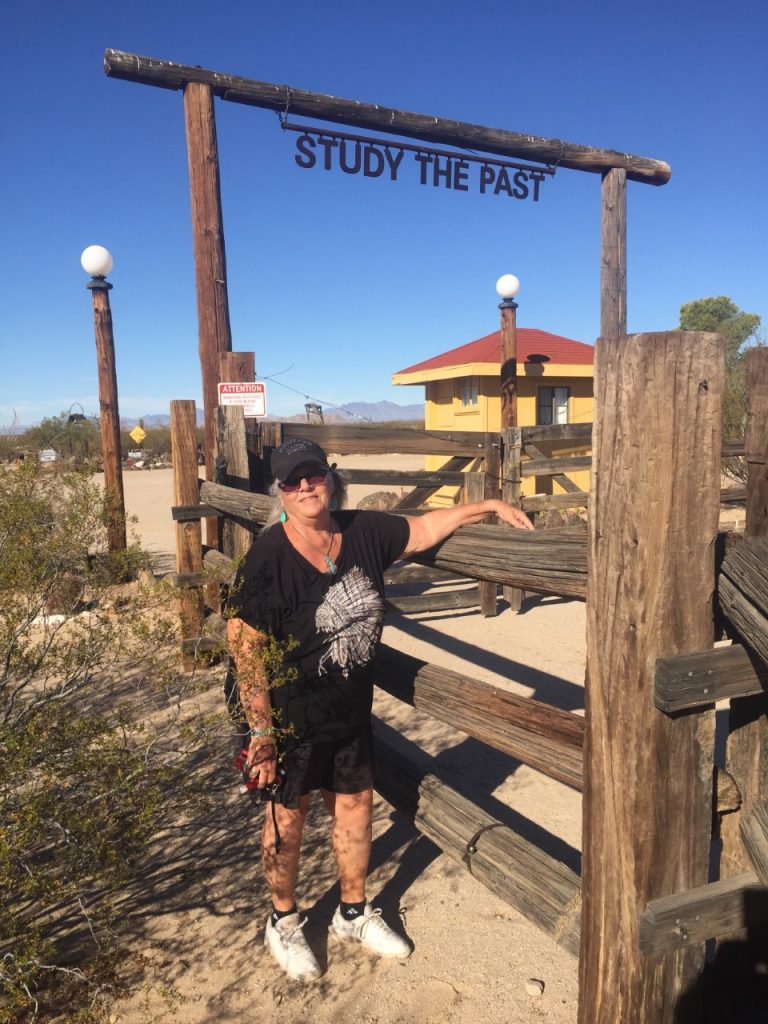 ON OLD HIGHWAY 66 IN THE MOJAVE DESERT IS A COMPOUND CALLED “GOFFS.” Established by the foremost author on the history of the Mojave Desert Dennis Casebier, it is now called The Mojave Desert Heritage and Cultural Association. We have been privileged to be members for the past 20 years and enjoy the group’s annual Rendezvous held in October each year. These are dedicated souls with a passion for recording and enjoying the history of the area and mainly The Old Mojave Road. It starTed out as The Mojave Trail when local Indian tribes used it to travel to trade areas (all the way to the coast). It grew into a wagon road where settlers traveled and mail transported. Due to attacks by Indians, the government set up posts along the way for protection. Much evidence still remains along the road with remnants from old posts, spring heads, petroglyphs, old cabin runs, etc. 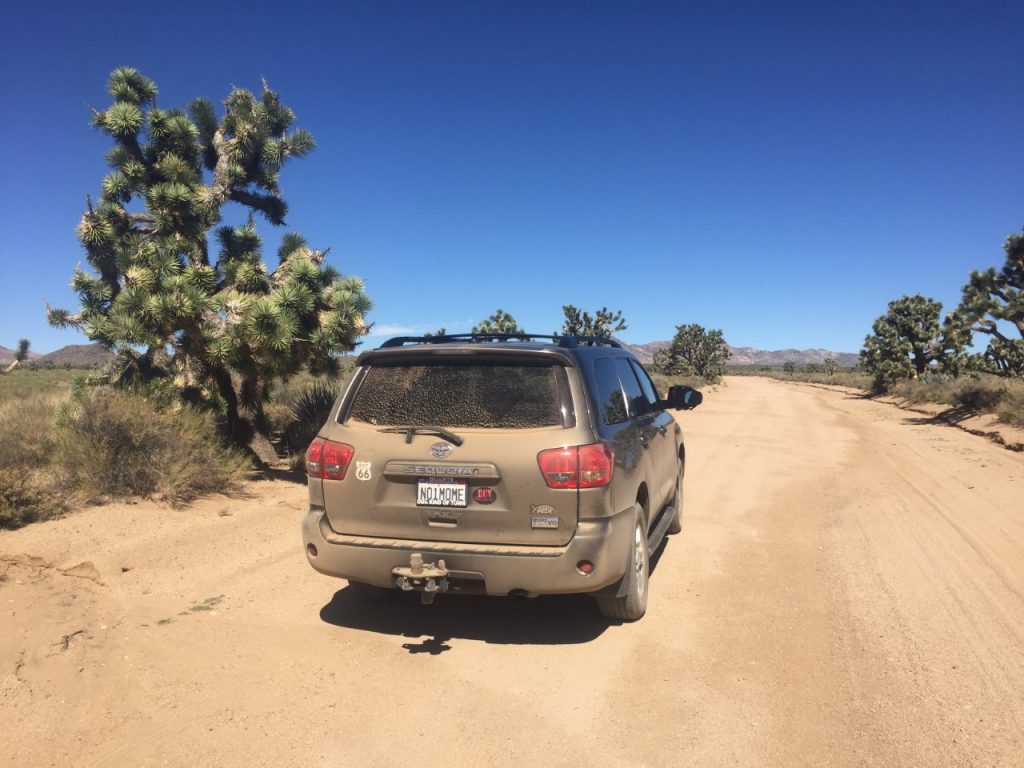 A DIRT-COVERED VEHICLE IS PROOF YOU TREKKED THE OLD MOJAVE ROAD! 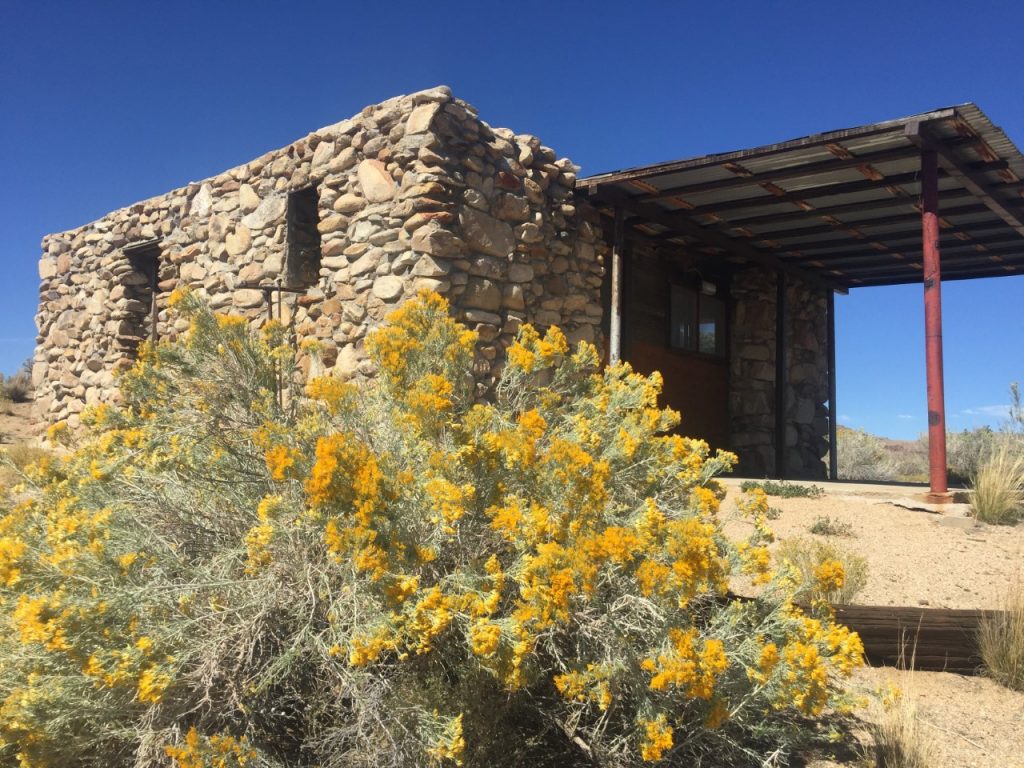 THE ROCK SPRING LOOP TRAIL TAKES YOU TO THE SPRING AND TO A CABIN. The Rock House was constructed by Bert Smith in 1929. He came to this area to recover from poison gas exposure suffered during World War I. Doctors told him he didn’t have long to live, but the dry desert air proved so beneficial to Smith’s health that he lived here for 25 more years! The second long-term resident was artist Carl Faber, who lived and worked at the rock house in the 1980s, selling his artwork to passing travelers.

While on the trail we shared a picnic table with a youth group from Bishop. They were installing water guzzlers for small animal desert dwellers!

BACK AT GOFFS WE ENJOYED THE ACTUALLY WORKING STAMP MILLS AND A GIRATOR. WHAT DEDICATION IT TAKES TO RESCUE THESE OLD DESERT REMNANTS AND GET THEM INTO WORKING ORDER. 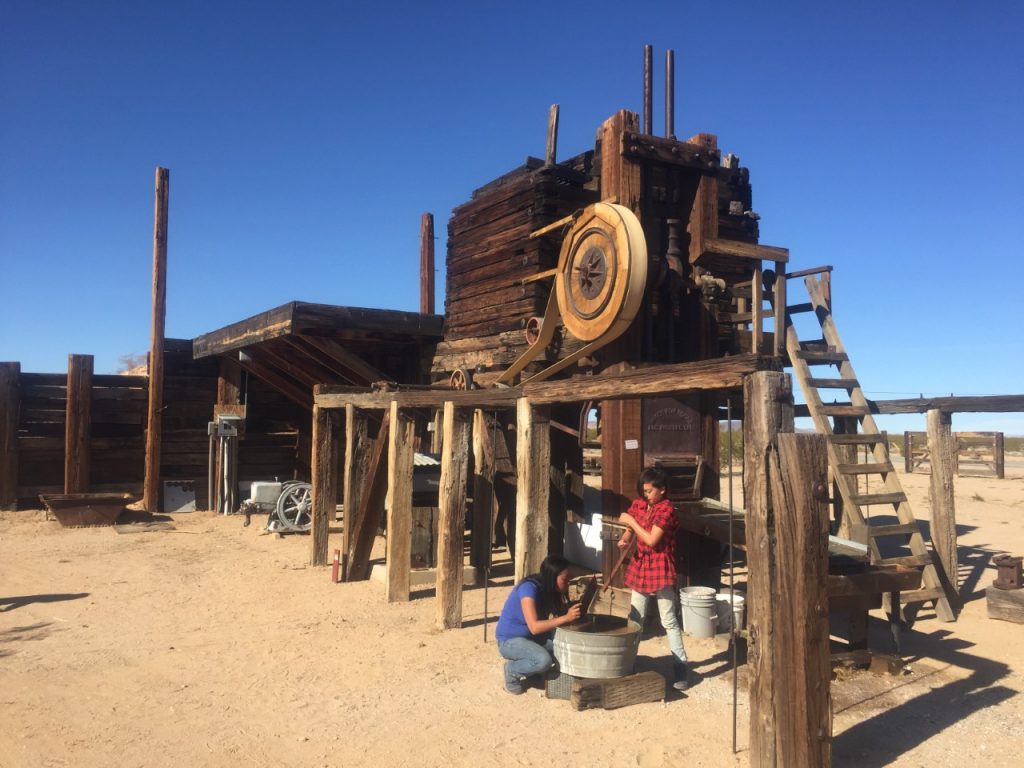 And our favorite is an old canon which is set off as one of the Rendezvous highlights: 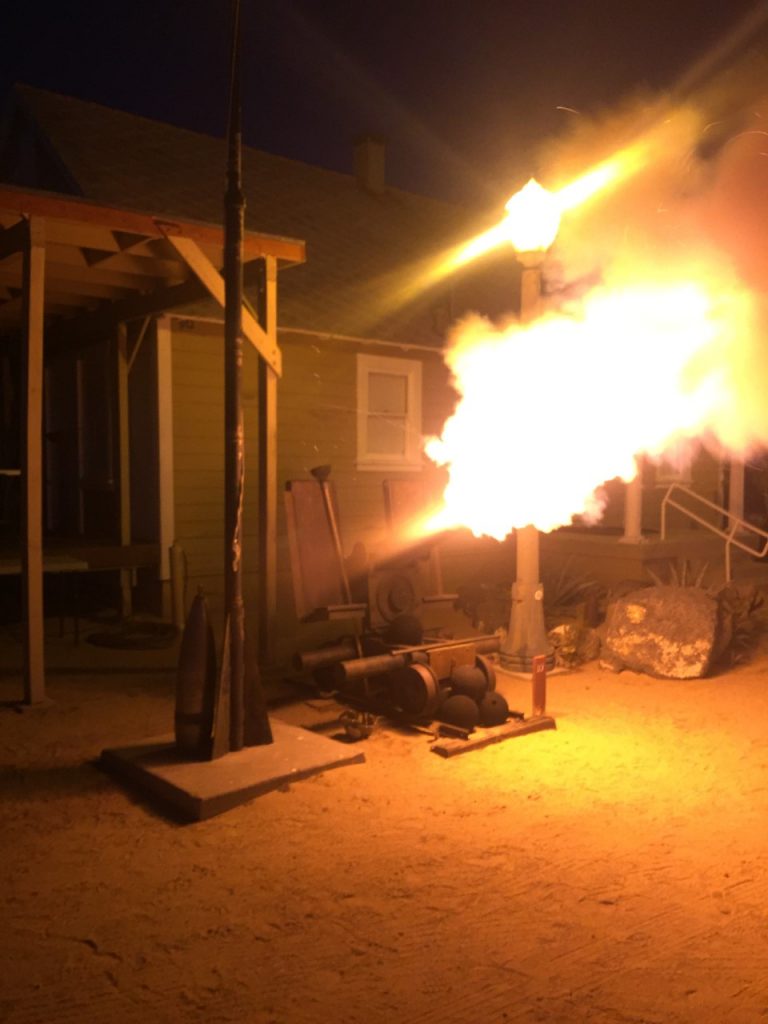 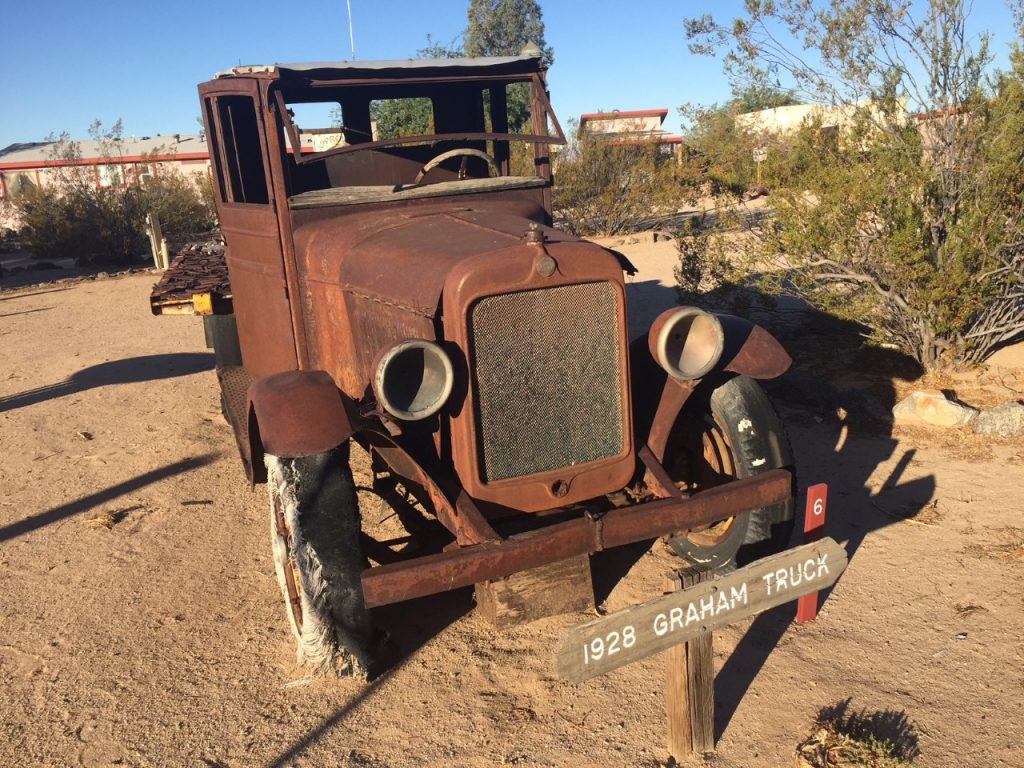 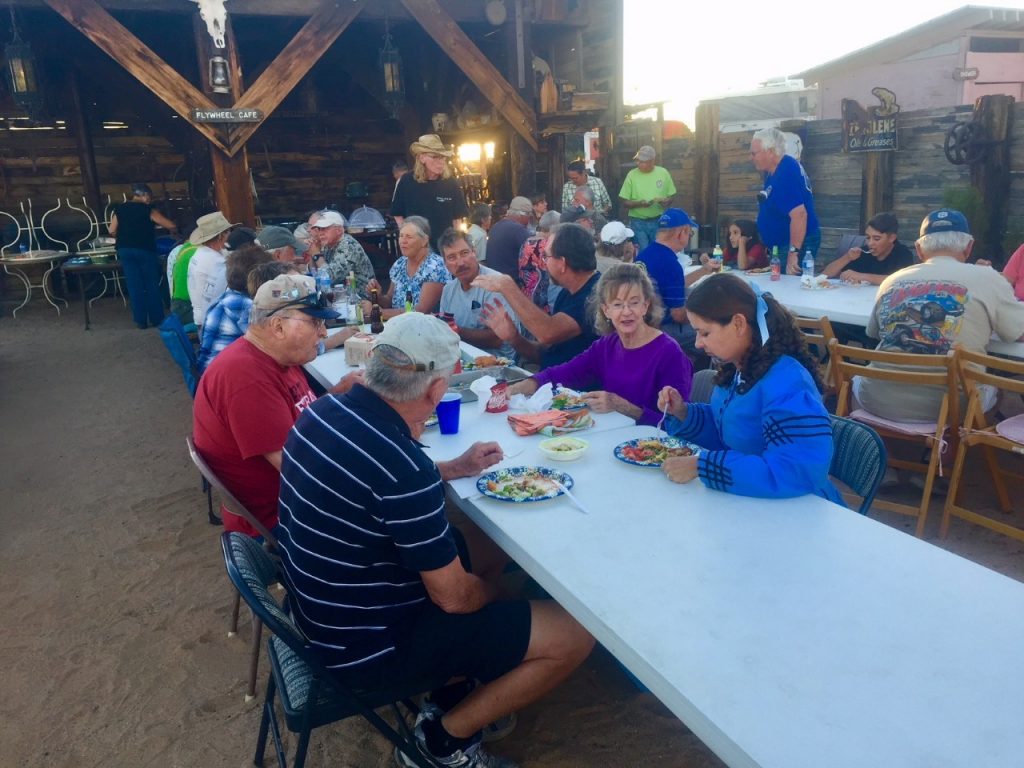 The anchor of Goffs is the old 1914 Schoolhouse which served the area for many years. Abandoned at one time it was deteriorating dueto vandals and the harsh desert elements, but was rescued by this group and now serves as a museum and office at Goffs. 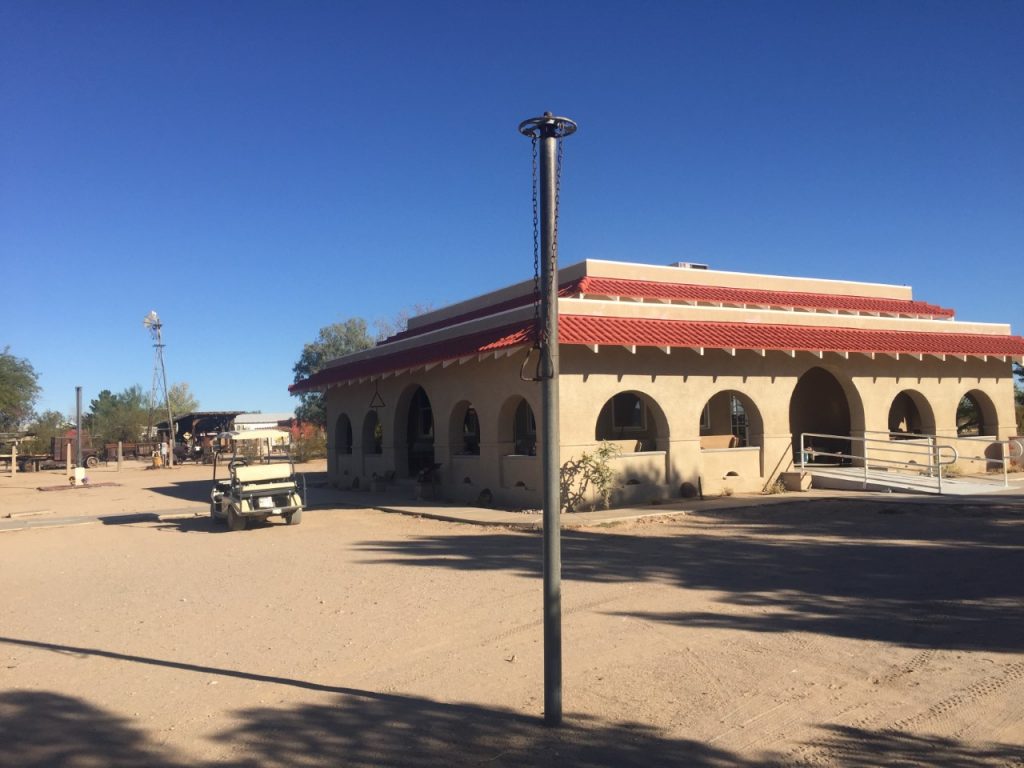 A MEMORIAL GARDEN GIVES US TIME TO REFLECT ON THOSE WE HAVE LOST. HERE ARE BRICKS FOR MY SON BEAU, AND FOR MY PARENTS. MY FATHER WAS A MEMBER OF THE MDCHA AND COLLABORATED WITH DENNIS CASEBIER WHEN WRITING HIS BOOKS.
http://www.insidesocal.com/66/files/2017/10/beau.jpg”> 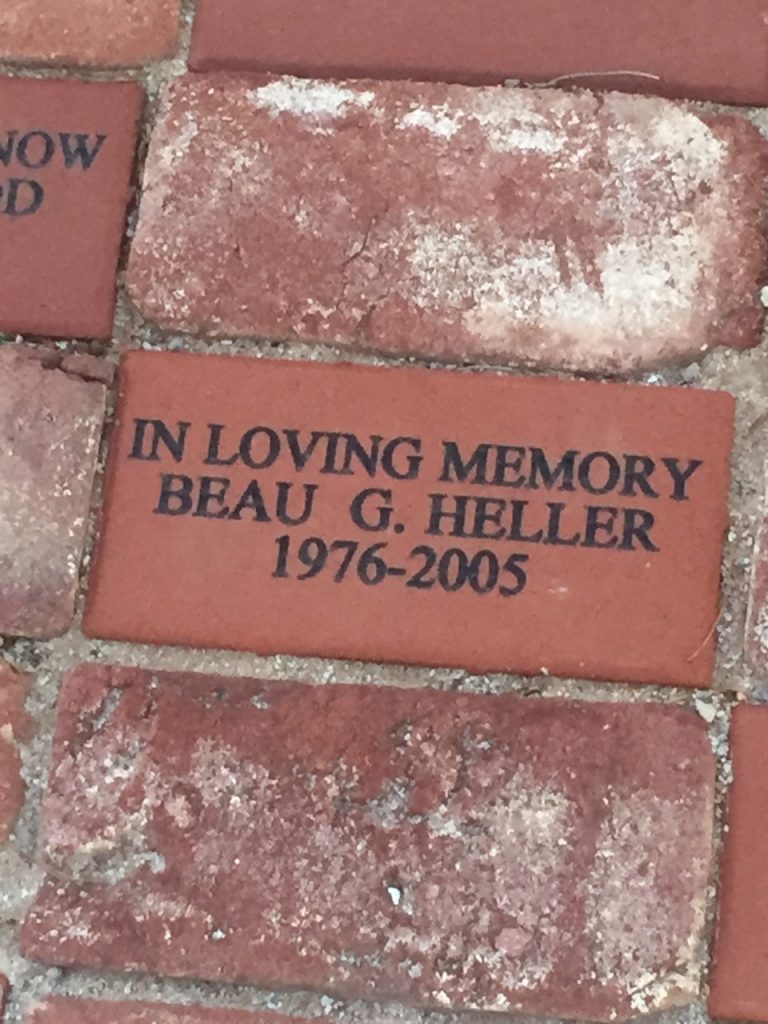 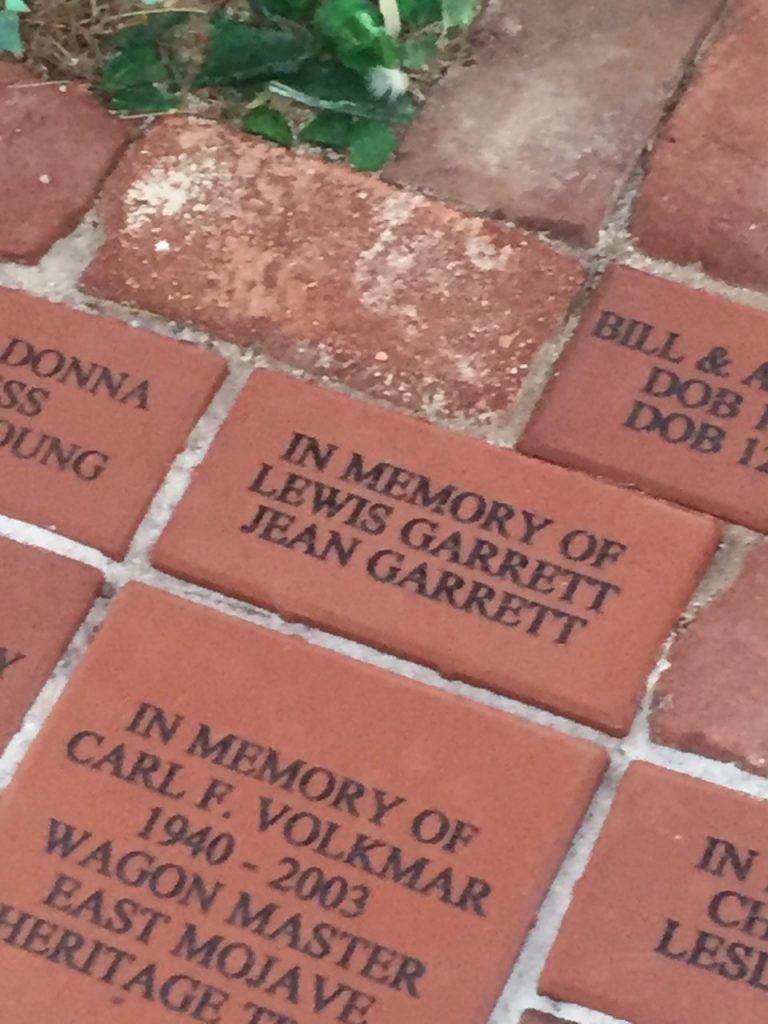 DEBBIE MILLER’S TRIBUTE TO OLIVE OATMAN WAS A HIGHLIGHT OF THE RENDEZVOUS.  Olive Oatman is not the only well-known captive who was recovered and returned to her home community, but her story does exemplify what happened to women who were captured by Native American Indians and the ongoing emotional trauma they experienced when they were returned to their families.  AMAZINGLY DEBBIE MADE THIS DRESS HERSELF – A REPLICA OF ONE OF OLIVE’S OUTFITS.  You may know Oatman as the burro roaming town on Route 66 near Laughlin. 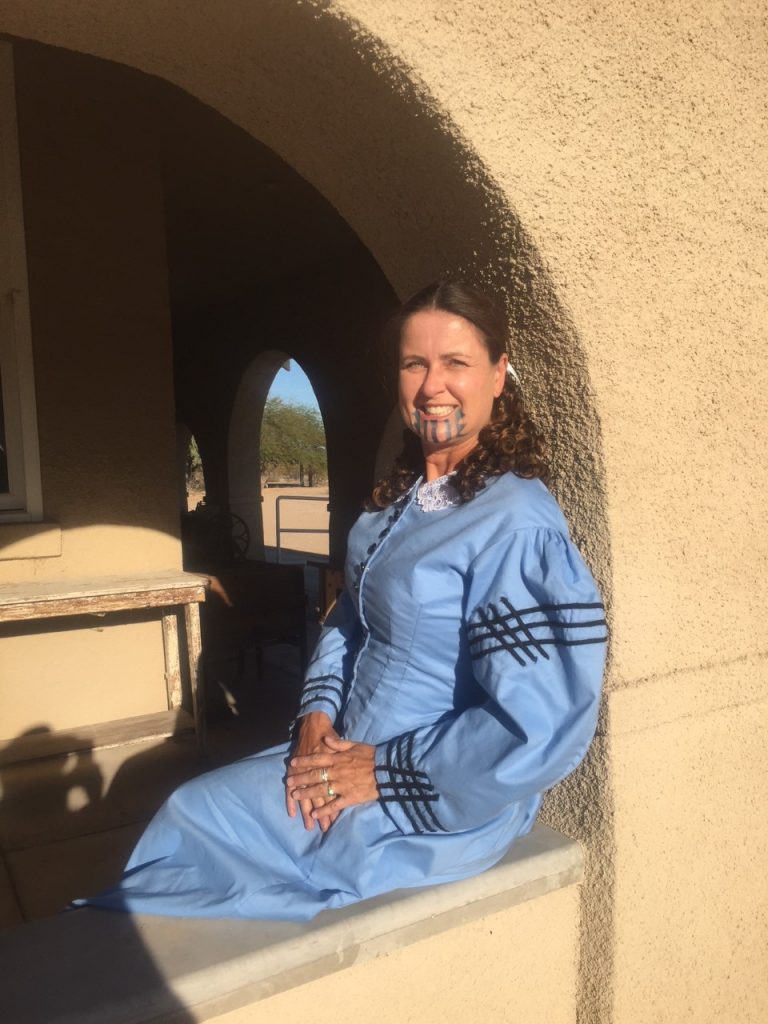 A STOP ON THE WAY HOME:  THE SALTON SEA

WE ENJOYED THE SOLITUDE AS THE ONLY ONES IN THE CAMPGROUND. ALTHOUGH WE SPOTTED BLACK NECKED STILTS, PELICANS, EGRETS AND HERONS, THE AREA WAS NOTICABLY DEVOID OF THE USUALLY ABUNDANT BIRD LIFE. DEAD DRIED TILAPIA LINED THE SHORE, TESTIMENT TO THE OXYGEN-STARVED SALINE LAKE. A WATER SOAKED PICNIC BENCH IS TESTAMENT TO THE FLUCTUATING LAKE LEVELS. 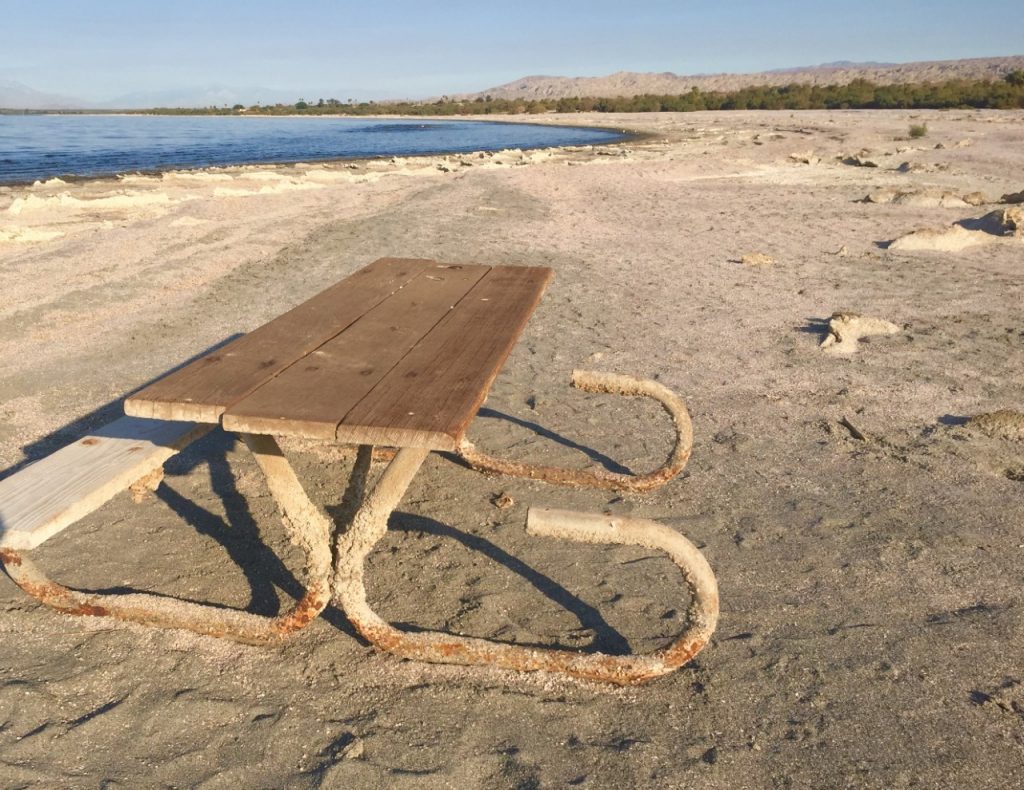 THE HIGHLIGHT OF OUR SALTON SEA CAMPING HAS ALWAYS BEEN THE BRILLIANT SUNSET, BUT IT WAS RATHER SUBDUED THIS TRIP. 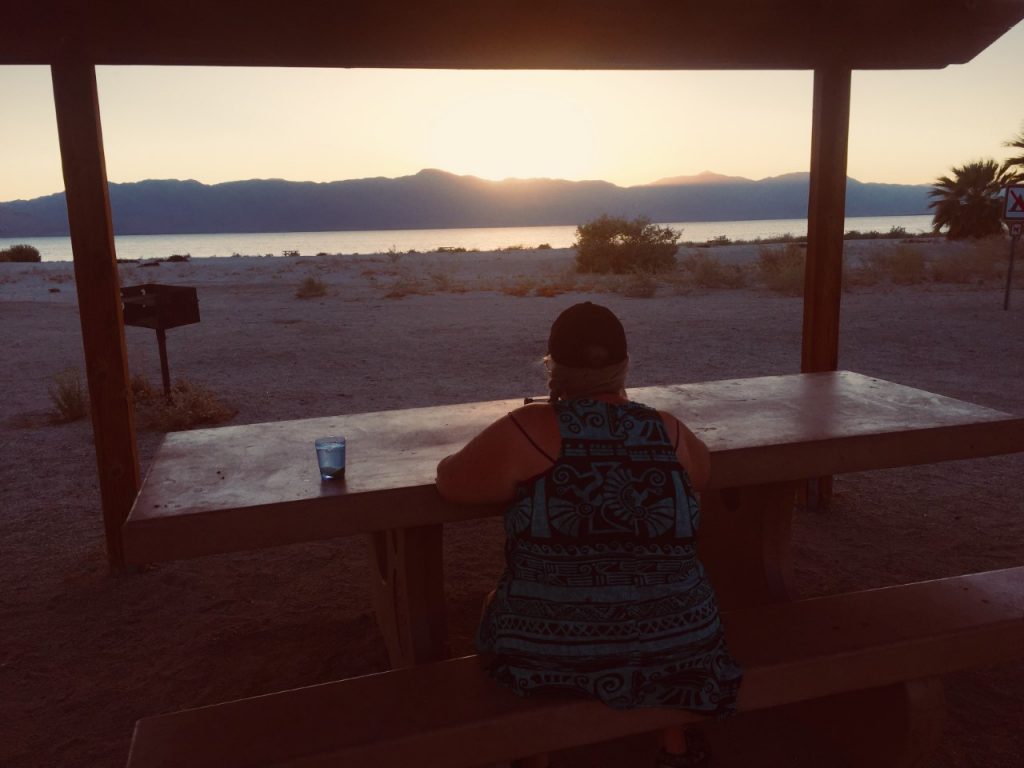 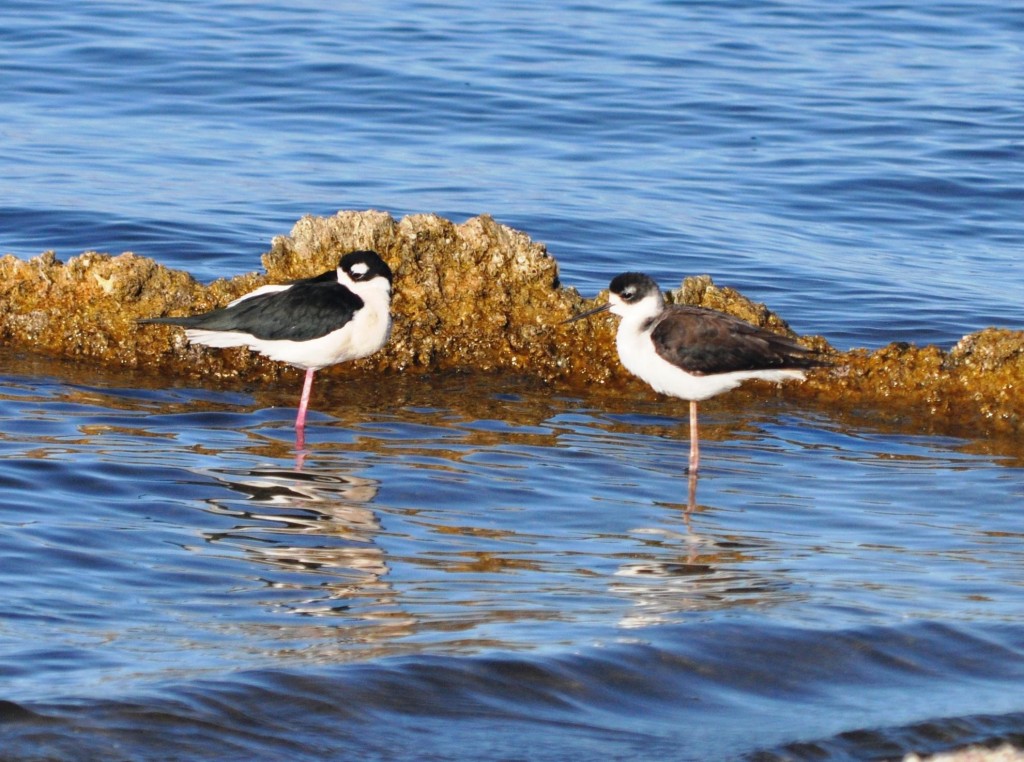 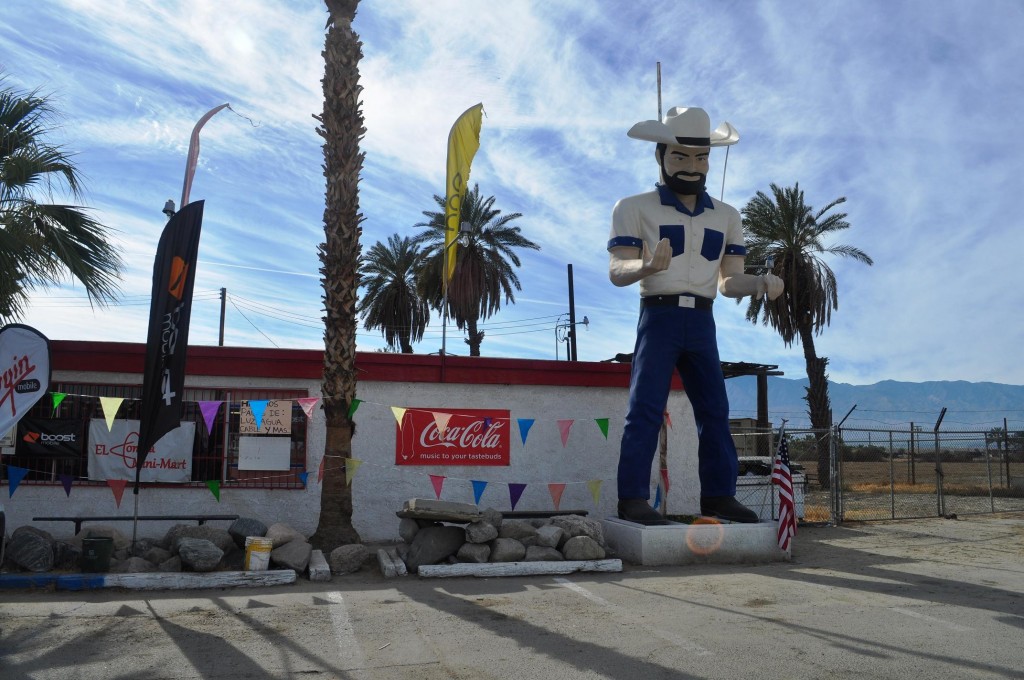 WHERE OH WHERE DID COWBOY MAN GO? HE WAS MISSING FROM HIS SPOT IN MECCA AT AN OLD STRIP MALL. I STOPPED TO INQUIRE AND WAS TOLD HE WAS SOLD TO SOMEONE IN APPLE VALLEY. I’D LOVE TO FIND HIM. PLEASE REPORT IF YOU RUN INTO HIM! 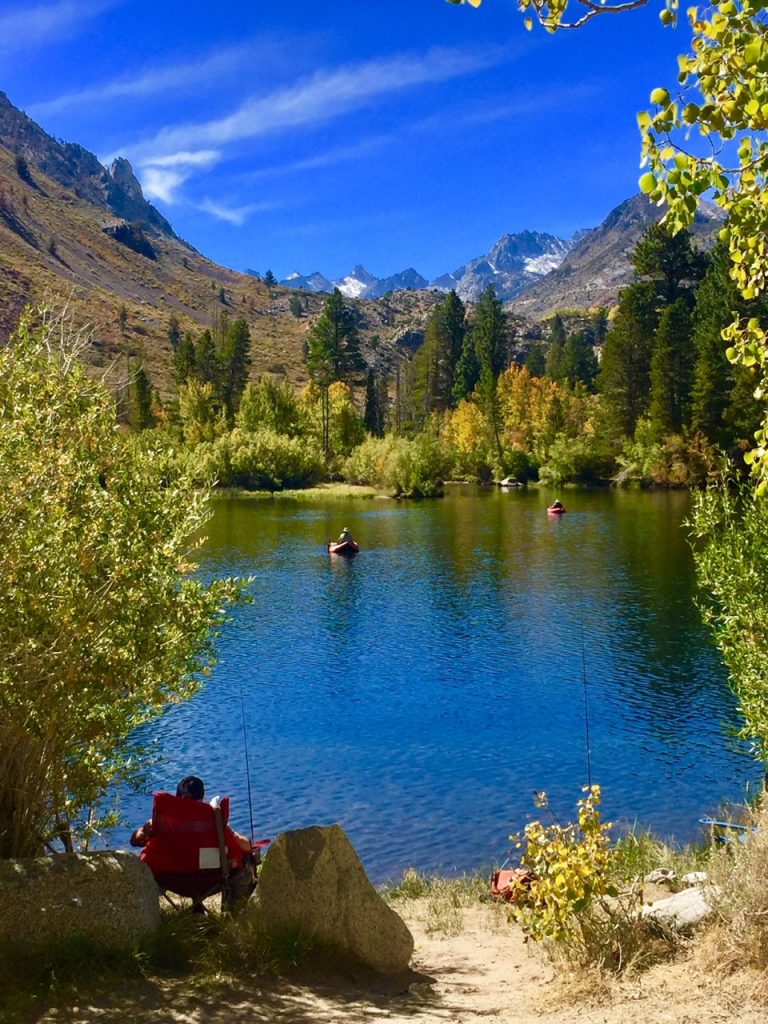 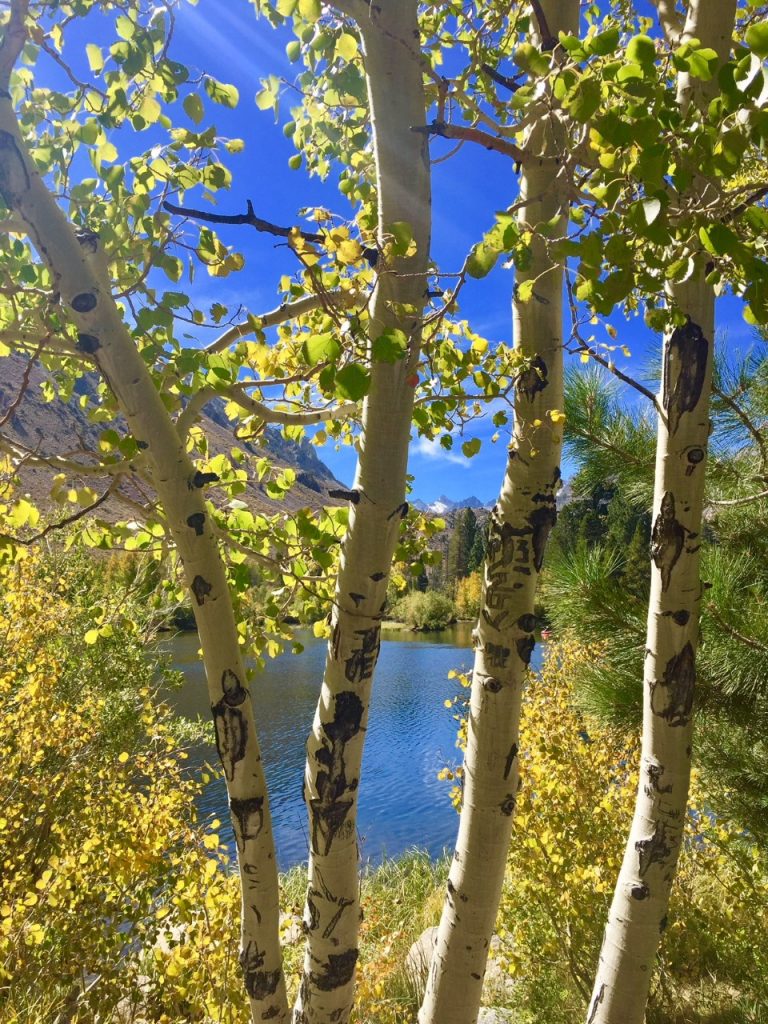 BRILLIANT FALL COLORS PAINT THE EASTERN SIERRAS AT DIFFERENT TIMES IN THE FALL, DEPENDING ON THE ELEVATION. A CHANGE IN AIR TEMPERATURE AND DECREASED DAYLIGHT ALSO AFFECT THE TIME AND SPECTRUM OF THE COLORS. OUR TRIP WAS IN LATE SEPTEMBER. SOME AREAS WERE COLORFUL, OTHERS NOT SO MUCH. THE WEATHER WAS CALM AND MILD WITH BRILLIANT BLUE SKIES AND LOTS OF TOURISTS EVERYWHERE.
WE MADE OUR USUAL STOP IN BISHOP TO VISIT THE MOUNTAIN LIGHT GALLERY. THE FANTASTIC PHOTOS OF GALEN ROWELL TAKEN ALL OVER THE WORLD ARE A WONDER TO BEHOLD. GALEN AND BARBARA ROWELL WERE A DYNAMIC COUPLE, NEVER MORE AT HOME THEN THEY WERE IN THE EASTERN SIERRAS. SADLY A TRAGIC ACCIDENT TOOK THEIR LIVES IN 2002. THEIR CHILDREN OPENED THE GALLERY TO HONOR THEIR MANY ACCOMPLISHMENTS. 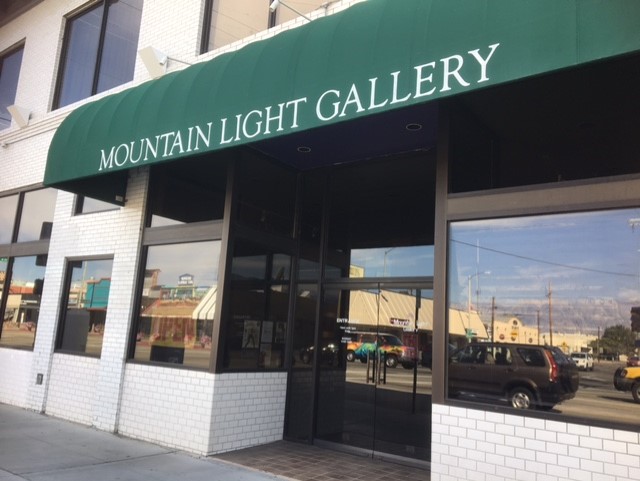 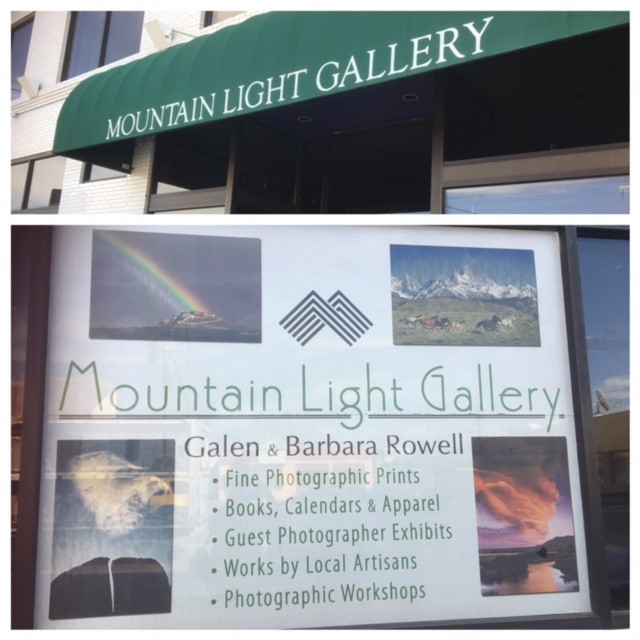 TO OUR SHOCK WE FOUND THAT THE GALLERY IS ABOUT TO CLOSE ITS DOORS. WE WILL MISS THIS ALWAYS ENJOYABLE STOP.

WE STOPPED AT THE EASTERN SIERRA MUSEUM IN INDEPENDENCE AND TO OUR DELIGHT THEY WERE SELLING THE BOOK WE AUTHORED IN THEIR GIFT SHOP: CURIOSITIES OF THE CALIFORNIA DESERT. WE ALWAYS ENJOY PERUSING THE MUSEUM, AND WANDERING THROUGH THE OUTSIDE YARD WHICH FEATURES SO MUCH LOCAL HISTORY. ADDED THIS YEAR IS A NEWLY RENNOVATED LOCOMOTIVE. 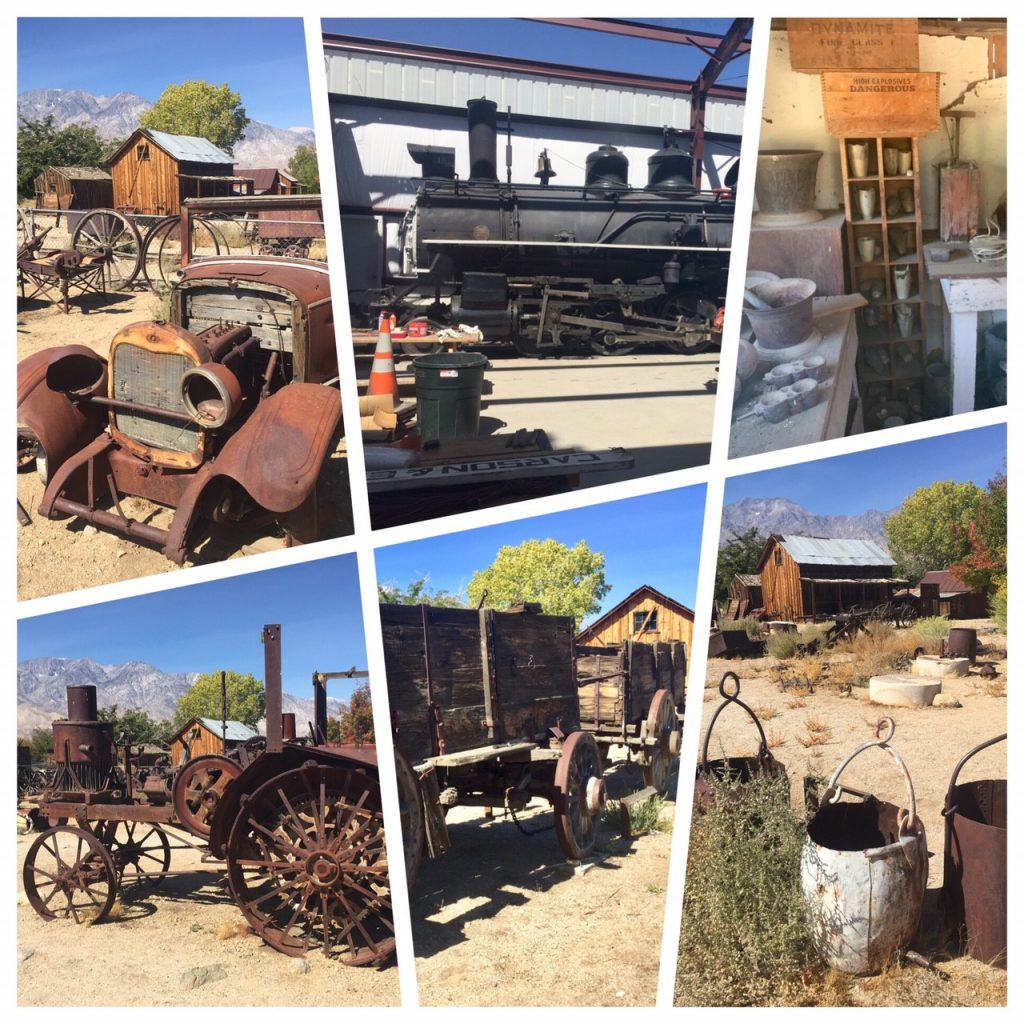 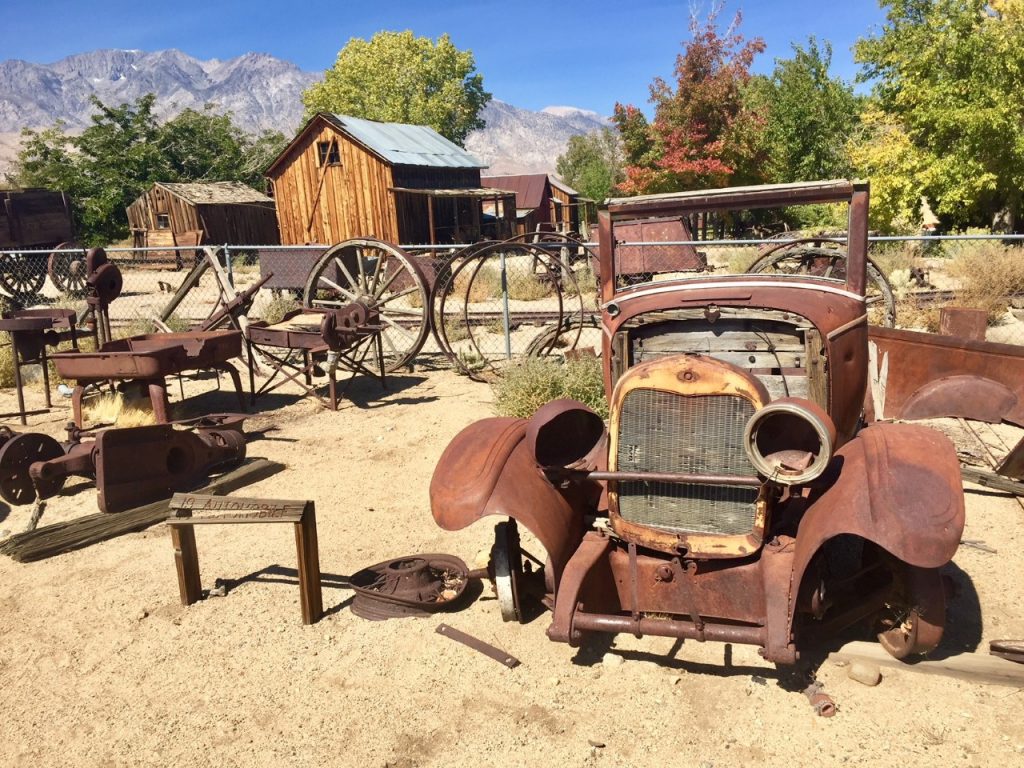 ENJOYING THE MILD FALL WEATHER WE CAMPED AT KEOUGH HOT SPRINGS. THE DEVELOPED SWIMMING AREA SPORTS A HUGE WARM POOL AND A BIG SHALLOW HOT POOL. IT IS COVERED, HAS FACILITIES, A GIFT SHOP AND FOOD. A SHORT WAYS AWAY ARE THE WILD HOT SPRINGS WHICH ARE CLEAN AND CLEAR AND BEAUTIFUL. BE PREPARED TO COVER YOUR EYES! 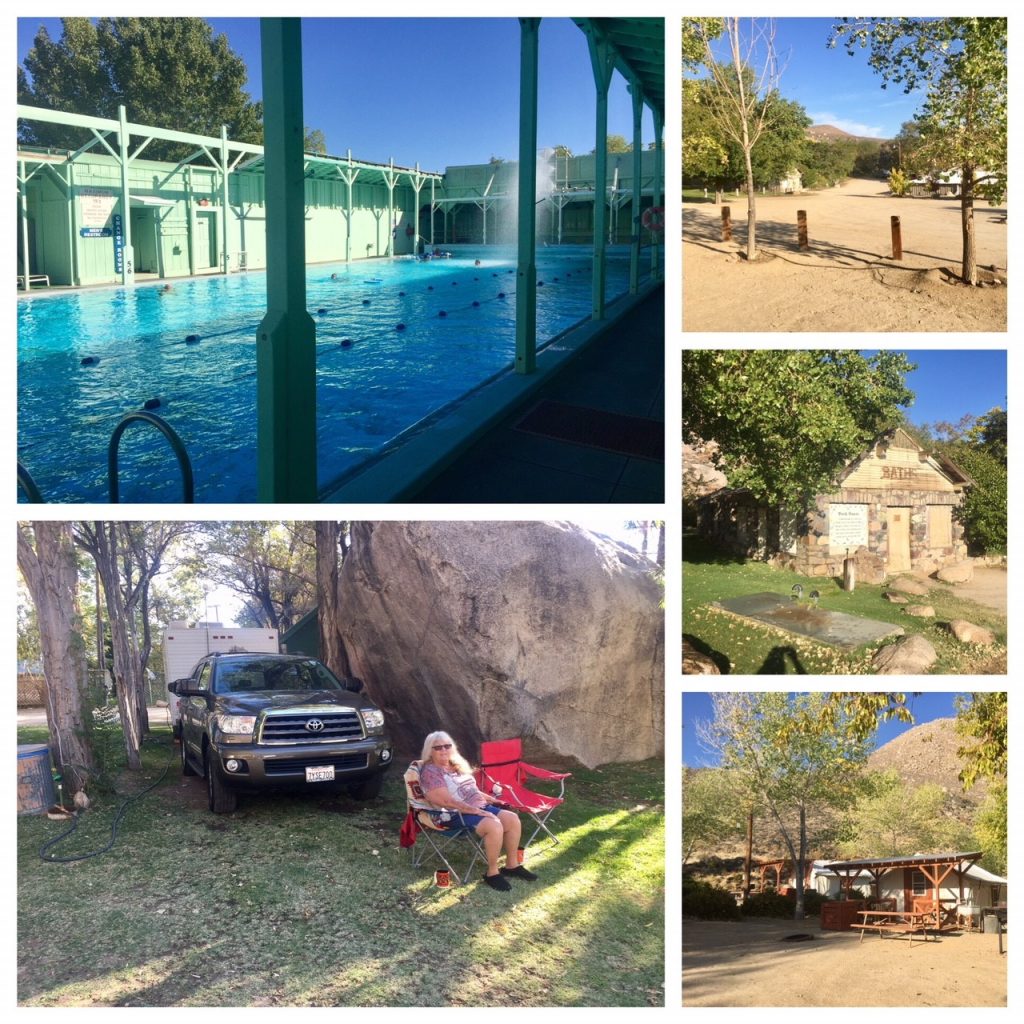 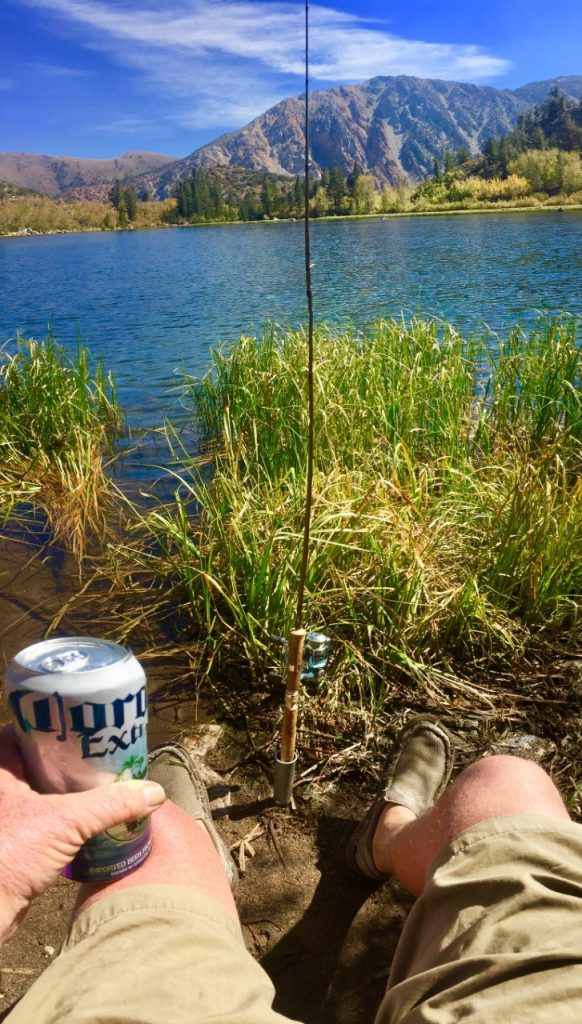 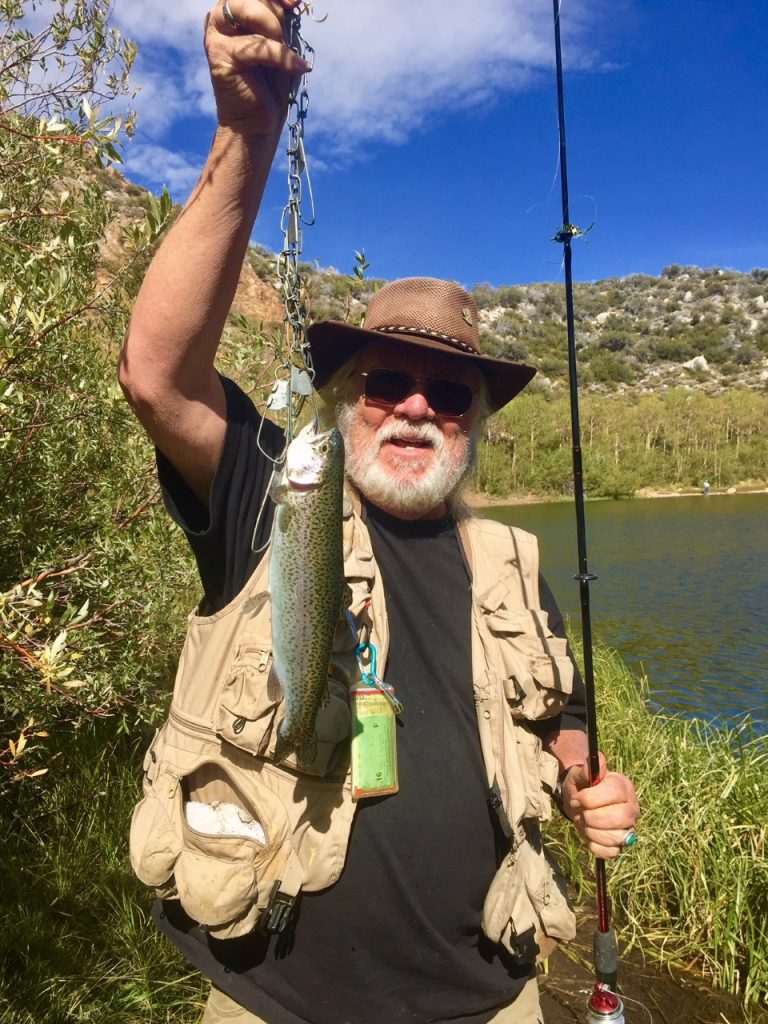 WHILE CAMPED AT LONE PINE, ALAN WANDERED THROUGH THE PET CEMETERY. 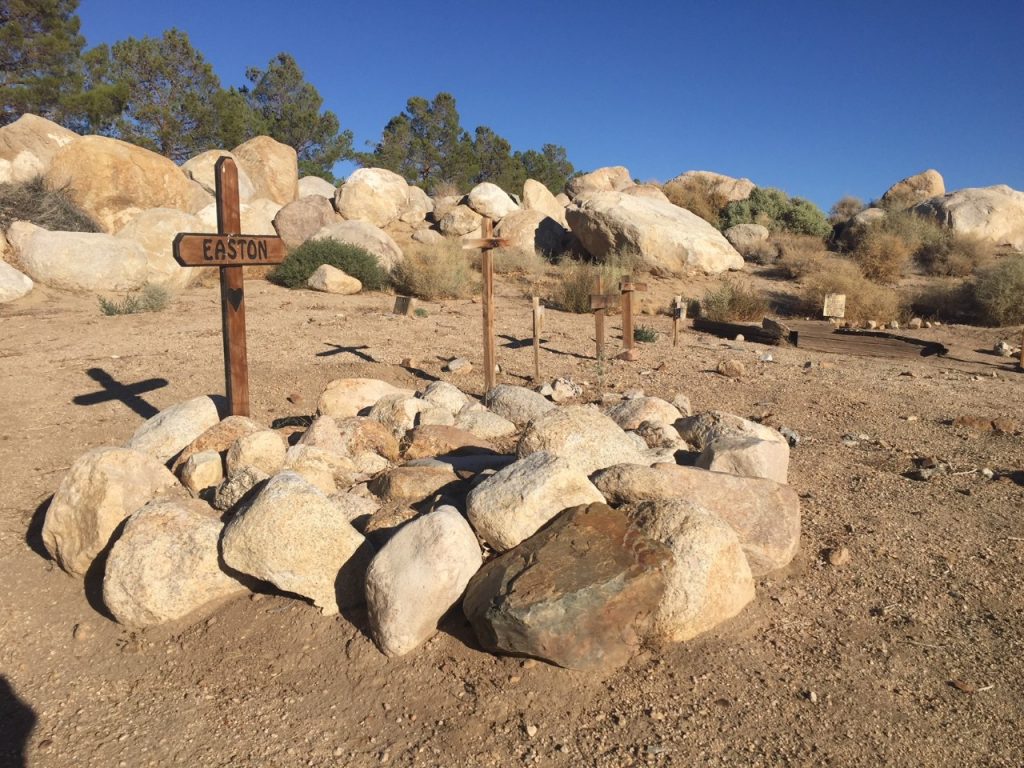 A JUVENILE COOPER’S HAWK ENJOYS HIS REFLECTION IN A PUDDLE. 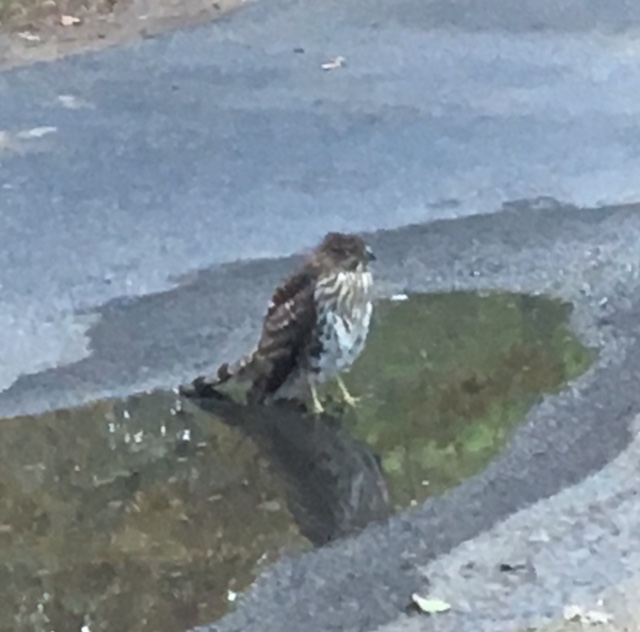