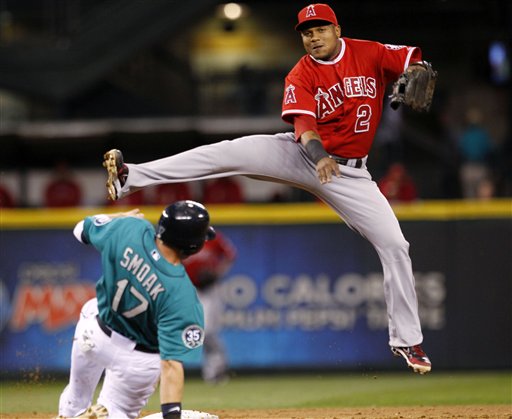 The outfield of Mike Trout, Peter Bourjos and Josh Hamilton has already been mentioned as one of the best in recent memory. The Angels’ worst defensive infielder is second baseman Howie Kendrick, but he’s considered average by some metrics (notably range factor) and managed to lead the league in fielding percentage in 2011.

It’ll be interesting to see what happens now that the Angels have overhauled their pitching staff. Righty Joe Blanton and lefty Jason Vargas are contact pitchers, certainly more than Dan Haren and Zack Greinke. Will the Angels’ defense help their effectiveness? That was part of the thinking in both acquisitions – we’ll see if it matches up with reality.

If there’s a fly in the ointment, it’s that Hamilton had a major off-year in the field in 2012. His ultimate zone rating – designed to account for a fielder’s ability to prevent runs with his arm, range, double plays and “errorlessness” (for lack of a better word) – was a woeful -12.6. That was mostly a result of his play in center field, however, and moving to right field could be the cure to what ails him.

• Via the Angels’ Facebook page, Tim Salmon took some photos with troops in Germany. Stars and Stripes has the story.

• Luis Jimenez: 3-for-4 yesterday, 5-for-11 (.455) in the Caribbean Series, playing for the championship tonight against Mexico (6 p.m., ESPN Deportes). He and his Leones del Escogido teammates also committed a delay of game penalty yesterday against Navegantes de Magallanes, but were not penalized in a 4-2 win.

• In American League West news, Felix Hernandez is reportedly on the verge of signing a seven-year, $175 million contract extension to remain a Seattle Mariner. The total value would be the largest ever for a pitcher, while the $25 million average annual value eclipses that of Zack Greinke ($24.5M).

• Todd Helton was charged with driving under the influence after drinking and driving … to buy lottery tickets, according to police in Thornton, Colorado. (It’s never good when your baseball news comes courtesy of TMZ).

• Finally, Tim Raines is a Hall of Famer.

• I’ve personally laid eyes on exactly one baseball card from before 1870. Like this one, which sold for $92,000 yesterday, it was also a group photo.

• Which is the best defensive team of the last decade?