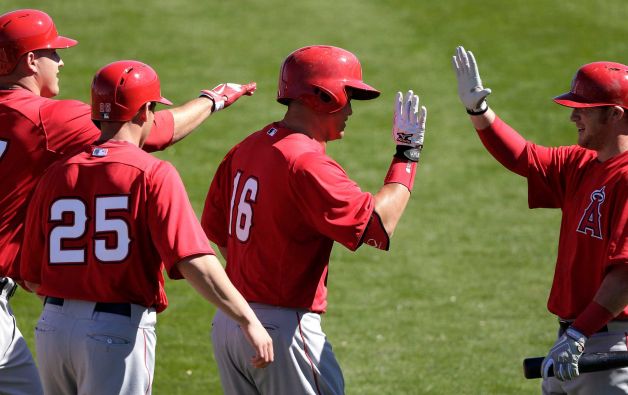 Will Hank Conger‘s wild arm behind the plate Wednesday cripple his chances of making the Angels?

Manager Mike Scioscia didn’t lay down a red carpet to his doghouse for Conger, who nearly decapitated Jered Weaver on a throw to second base Wednesday. Neither did Scioscia lie about where Conger stands right now.

In short, he can’t “deter a running game,” to borrow Scioscia’s phraseology.

“Hank has the ability to get to that level, no doubt,” Scioscia said. “Right now, he’s not. It’s still early in the spring. … We’re confident he’s going to find his release point and do what he needs to do.”

“If you rate how a catcher throws, it’s not as high as some other things he needs to bring,” Scioscia said. He specifically mentioned how a catcher relates to the pitcher, defends his position and calls a game.
That’s good for Conger, who threw out just 28 percent of attempted base-stealers last season at Triple-A Salt Lake. He is battling for the backup catcher’s position with John Hester, who was slightly better in throwing out runners (30 percent) and is seen as the better defensive backstop.
“The catcher has to be able to deter a running game, no doubt, but that doesn’t mean you’re throwing rockets on the corner of the bag every time,” Scioscia said.