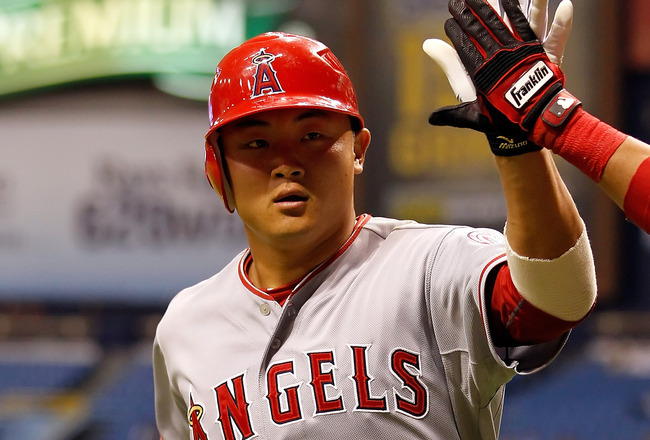 Angels catcher Hank Conger made three throws to infielders in Thursday night’s exhibition game against the Texas Rangers. Two came on stolen base attempts at second; both runners were safe. The other came when Conger tried to pick off the runner at first base, starting a rundown that resulted in Leonys Martin being caught stealing, 2-3-4 in your scorebook.

It was only three throws and only an exhibition game in March.

For most of spring, Conger has been the baseball equivalent of an NBA superstar who can’t make free throws. He’s Shaq, Dwight Howard or Wilt Chamberlain in a catcher’s mask, a good player with a fatal flaw. Whether it’s the ritual toss down to second base before each inning, or a spur-of-the-moment pickoff attempt, Conger has had trouble hitting his target. One particularly egregious throw earlier in spring nearly hit pitcher Jered Weaver in the head.

But Thursday was a good day.

“I can say all I want but as far as confidence and stuff, it was unbelievable,” he said. “I’ve been so focused on my throwing that the hitting has taken a back seat to everything. To make that back pick and also make that strong throw to second base was huge for me.”

Friday was not a good day.

Conger caught a Triple-A game on a back field at Tempe Diablo Stadium and he reverted to Shaq at the free-throw line. He typically took an extra fraction of a second before each throw and still was inconsistent hitting his targets. One warm-up throw to second base short-hopped the shortstop on the wrong side of the bag. A pickoff attempt at first base in the fourth inning was also in the dirt.

It didn’t cost him an error, and there were no stolen base attempts against him, but most of the throws he did make didn’t look good.

Prior to the game, Conger acknowledged his reality in the battle to back up starting catcher Chris Iannetta.

“I can’t let down right now,” he said. “I’ve got to keep working at it. Just because before, at some point, it was so natural for me. Now it’s come to be where I have to constantly focus on it each and every day.”

Earlier this week the Angels signed veteran catcher Chris Snyder as an insurance policy. Snyder is a career .225 hitter who happens to own the highest fielding percentage all-time by a catcher (.998) with at least 500 innings at the position.

Angels manager Mike Scioscia has a historical affinity for defensively sound catchers. Between Scioscia, a former catcher, and general manager Jerry Dipoto, who got to know Snyder as an Arizona Diamondbacks executive from 2006-11, Snyder has a pair of allies in the organization.

“He’s caught some very difficult pitchers to handle, both physically and emotionally,” Dipoto said of Snyder. “He has done a fantastic job. Randy Johnson, throwing left-handed slicers going 100 mph with a slider that can fall off the face of the earth. Brandon Webb, whose ball moved more than any other right-handed pitcher I think I’ve ever seen, and Chris handled these guys very well. Curt Schilling, the challenges of following a game plan with Curt as a young catcher in the big leagues trying to cut your teeth and having a guy who was so ahead of the program as far as understanding scouting reports, video, dissecting an opponent or a lineup — and Chris absorbed that at a very young age. As he got into the bulk of the playing career, he is very attentive to advanced scouting reports. He understands opposing hitters and what he can help control behind the plate, because he handled such a wide variety of pitchers through the years.”

With Opening Day 10 days away, there isn’t much time for Snyder to get to know the Angels’ pitching staff. Nor is there much time for Conger to work on his yips. It’s the most intriguing position player battle in camp and it will play out on back fields and in bullpen sessions before it plays out in Anaheim.

“I know that there is a short window as far as from now to the start of the season, as far as where I’m going to go,” Conger said. “If I think about that it tends to clutter my mind, and try to get things away from what I really need to get to.”