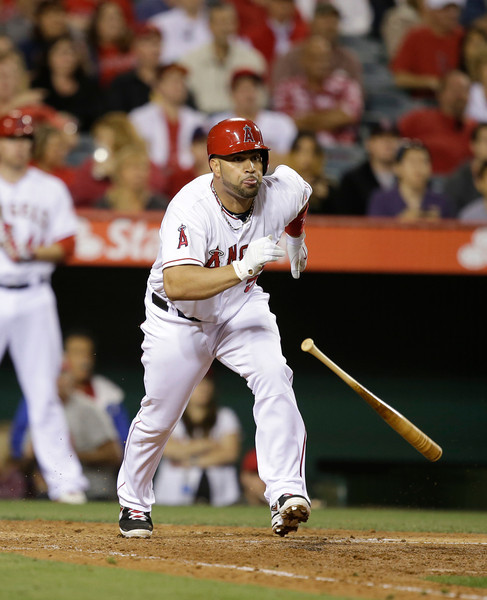 Albert Pujols’ running can be painful to watch; lately his batting average has been suffering too. (Associated Press photo)

A visiting beat writer at Sunday’s game watched one of Albert Pujols‘ three strikeouts and marveled at what he saw. The swing-and-miss at strike three, down and away, simply wasn’t the same Pujols. In fact, it looked a little like Josh Hamilton did earlier this month.

Hamilton seems to be coming around, as I wrote in my game story yesterday. Pujols, who is batting .198 since April 21, does not.

Writes Joe Posnanski: “After years of being the best player in baseball, Pujols is now sort of beside the point.”

Mike Scioscia said something interesting after the game. I asked him if the Angels’ patience at the plate (they walked twice with the bases loaded and Hamilton averaged five pitches per at-bat) was evidence of a team that isn’t pressing as much, something Scioscia reprimanded his team for a couple nights earlier. His answer:

“I think we’re seeing some guys maybe use the whole field. As you try to get simpler, get more comfortable in the game, the things you talk about show up — you see the guys get in deeper counts, get a pitch, take a walk, hit the ball the other way, get better pitches to hit. Those things start to go in a positive direction. Hopefully he’ll keep taking strides toward it.”

I didn’t ask that because I didn’t catch Scioscia’s choice of pronouns until I listened to my tape after the game. But it isn’t hard to figure out — it’s Hamilton, who was hitting line drives to the opposite field, taking a walk, and going deeper into counts as if he was Mike Trout. Pujols was not.

For Pujols’ legacy, sure, we’re witnessing a turning point. As a key to the Angels’ success, it remains to be seen how long they can survive Pujols’ slump.

Some bullet points for a Monday morning:

• Miguel Cabrera‘s three-homer, five-RBI performance last night rekindled the 2012 American League MVP debate. Should it? Well, it did – among players, no less – and that’s OK. The debate is really over who is the better player and for now, maybe forever, the pinnacle of that debate was September/October 2012.

• Among baseball people, Cabrera is perceived as the better pure hitter than Trout, by far. (Buster Olney has a more nuanced breakdown of observations on his blog today.) But ask a player who they’d rather play with and the answers are more varied.

• The most popular arguments, the most raging debates, are those that can be simplified. And headline writers (including our own) are among society’s chronic simplifiers. It’s part of the job. Yet Trout vs. Cabrera shouldn’t be as crude as WAR vs. Triple Crown. if you click on that link to my pro-Trout argument in the MVP debate, you’ll notice that my argument didn’t begin with WAR; it began with how much better a team the 2012 Angels were because of Trout. That is a separate debate from who is the better player.

• Bud Selig’s position on replay in baseball is evolving like a politician’s position on gay marriage, and Bill Baer of NBCSports.com, for one, welcomes “our new robot umpire overlords.”

• Ernesto Frieri has five saves of more than three outs. No other pitcher has more than one.

• I’m not typically big on Italian pop, but the orchestral musicianship of “Per Te” by Jovanotti makes this ordinary song compelling.