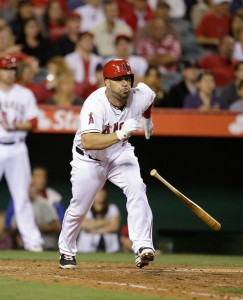 Albert Pujols could miss the remainder of the 2013 season after suffering a partially torn plantar fascia in his left foot Friday. (Associated Press)

Albert Pujols is counting on faith, his personal injury history, and a nearly pain-free left foot to carry his optimism for the next 6 to 8 weeks, or however long it takes to recover from a partially torn plantar fascia.

Pujols wouldn’t rule out returning to the Angels this season after being told by a team physician that the injury might need 6 to 8 weeks to heal. There are eight weeks and three days left in the regular season.

Pujols had been dealing with plantar fasciitis all season until he suffered the partial tear last Friday in Oakland.

“If it takes two months or three weeks or four weeks, great,” Pujols said. “I’m not going to try to rush anything.”

Wearing a protective boot on his left foot, Pujols told reporters that he’s a quick healer. He beat the timetable for a broken left wrist in 2011 by a month. He was expected to miss three weeks or more with a calf injury in 2008 and came back 16 days later.

Pujols said he would be out of the boot in three weeks.

“There’s nobody who wants to be out there more than me in the field,” he said.

Though plantar fasciitis surgery was an option, Pujols chose to play through the injury. He was playing at 45 percent health by his own estimate and it showed whenever he ran. Pujols served as the Angels’ designated hitter in each of his last 11 games, and in 65 of his 99 games in 2013.

The effect of the partial tear is similar to that of surgery. Pujols said he consulted with a team doctor who told him “congratulations, you just did the surgery yourself.” Pujols said he had not met with the Angels’ trainers as of Thursday afternoon, but that meeting will determine his exact course of action and provide a more accurate timetable for recovery.

Angels manager Mike Scioscia also suffered a torn plantar fascia when he was playing for the Dodgers, but he said his injury was “nothing compared to Albert.”

“He was playing in a lot of pain when he was playing, and the pain when that thing gave way was there,” Scioscia said. “It’s calmed down but it hasn’t healed.”

Discussing Pujols’ pain has been almost taboo this season, something the 33-year-old veteran always acknowledged but never described in detail. Scioscia made one of the more revealing statements on the topic Thursday, saying “he at times struggled with some of the basics you need to hit, definitely to play the field.”

“We just tried to keep him comfortable in the batter’s box,” Scioscia said. “We could see it, we could estimate it, but Albert lived it. You knew he was hurting.”