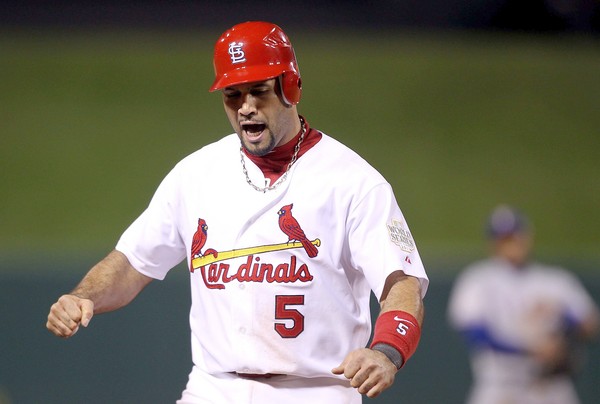 Albert Pujols broke in with the St. Louis Cardinals at 21 years old in 2001. He has long denied using steroids. (Getty Images)

The St. Louis Post-Dispatch reported today that Clark had been on the job less than a week last Friday when he declared on the air that Pujols used steroids: “I know for a fact he was. The trainer that worked with him, threw him batting practice from Kansas City, that worked him out every day, basically told me that’s what he did.”

More from Clark, courtesy of the P-D:

“(Chris) Mihlfeld (Pujols’ former personal trainer) had told me what he was doing with ‘Poolie’ — threw him batting practice, worked him out, shot him up, all that stuff.”

In a phone interview Thursday, Clark said that he and Mihlfeld spent a lot of time together in 2000 when they were with the Dodgers.

“I had asked him about conditioning and working me out, what he would do for me, and he asked me whether I had ever thought of taking some steroids,” Clark said. “… He just told me that he wanted me to get started on steroids and he had some other guys that were doing it. He told me that’s how he’s conditioning this guy that he met out of high school and college and he looked like he was going to be a star, keep an eye on him.’’

Clark said he was looking for a nutrition program, not steroids.

“He told me, ‘Well you couldn’t do what I do with Albert Pujols, he’s on this real strenuous workout deal.’ I said, ‘I wouldn’t want to try to do that.’ Every day he kind of came to me and says, ‘you ready to do it? I’m ready to do it.’ I said, ‘Well I’m just not a needle guy, I’ve had enough surgeries and injuries over the years. I don’t like needles … I’m not going to do that … I’m not a player anymore.

“He had told me he had done that with Pujols, with steroids, and I really never thought too much about it because steroids were really not on my radar screen at that time.”

Since Pujols is on the disabled list and not expected back until September – if he returns at all this season – don’t expect him to come out and address these accusations anytime soon. In fact, Pujols endorsed Mihlfeld when the two were the subject of steroid rumors in 2006, as detailed in the P-D story.

But the recent Biogenesis scandal raises the question of how far Major League Baseball would go to investigate performance-enhancing drug use by its players. If it can be proven that Pujols used PEDs after they were banned by the collective bargaining agreement, you wonder if MLB would try. The league did not begin testing for steroids until 2003 and did not penalize players who tested positive with suspensions until 2005.