– David DeJesus got off to a rough start in his first game, striking out three times while going 0-for-4. Normally, DeJesus will platoon with Shane Victorino in left field, but DeJesus was in center for this one because Mike Trout missed his second consecutive game with a sore wrist. David Murphy, one of the other new Angels, went 1-for-4 while playing left field. At least he didn’t strike out.

– The Astros re-took sole possession of first place in the AL West with this victory. The Angels, who recently led by two games, have gone 1-5 after a 20-game span in which they went 17-3.

– Albert Pujols hit his 30th home run, becoming the sixth player to hit at least 30 home runs in 13 seasons, the first to do it in his first 15 campaigns.

– Trout missed his second consecutive game with a sore left wrist. Manager Mike Scioscia told the Associated Press before the game that Trout is getting better, but that he wanted to “err on the side of caution.”

– Not a terrific performance by starting pitcher Garrett Richards. Not horrible, though. He allowed four runs on seven hits in 6 1/3 innings. What’s interesting is that he struck out just three even though he is throwing hard. It’s been a season-long curiosity. Richards struck out 164 in 168 2/3 innings before his season ended with a serious knee injury in August. He averaged 8.8 strikeouts per nine innings. He has just 91 strikeouts in 122 2/3 innings this season, a 6.7 average. 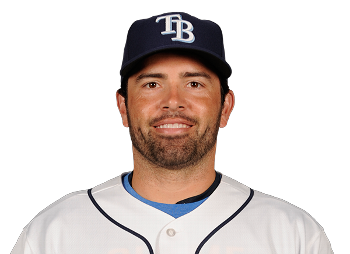 The Angels on Tuesday announced they have acquired outfielder David DeJesus from the Tampa Bay Rays for right-handed minor-league pitcher Eduar Lopez.

Victorino has 108 career home runs and 486 RBIs with a batting average of .276. He also has been in six postseasons, including the 2008 and 2013 Phillies and Red Sox World Series championship teams, respectively.

He’ll get his playing time in left field.