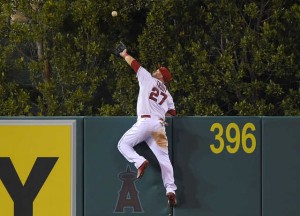 – Losses don’t come much more difficult than this one. When you’re up 3-0 with two outs in the ninth inning and your closer has gotten the first two batters and has two strikes on the third and then you lose, one has to wonder if perhaps this just is not the Angels’ year. A win would have pulled them with 2 1/2 games of the first-place Astros in the AL West and kept them within two of the Rangers in the race for the second wild-card spot. Instead, they are 4 1/2 behind the Astros and three behind the Rangers with only 20 games left in the regular season.

– To further enhance this notion that 2015 may not be the year of the Angels, consider that one of the hits in that five-run Houston ninth inning was a rocket of a grounder hit to Taylor Featherston. It was hit so hard by Carlos Correa that the ball stuck in Featherston’s glove. If it doesn’t, he throws out Correa easily and the Angels would have won 3-2. Furthermore, the 3-run home run by pinch-hitter Jed Lowrie was nearly caught by Kole Calhoun, who couldn’t quite get to the ball as it made its way just into the stands near the right-field foul pole.

– Now the question is, can the Angels come back from such a tough loss? Sure, they won the series from the Astros, taking two out of three. But when you have a victory in the bag and let it slip away, creating a two-game swing in the standings, even the toughest ballplayers could have difficulty with that. The Angels begin a 10-game road trip Monday night in Seattle. It will be interesting to see how they play.

– It was a shame to lose a game in which C.J. Cron hit two more home runs and Mike Trout hit one. It was No. 35 for Trout, meaning Trout and Albert Pujols became only the second Angels duo to hit at least 35 home runs in the same season. Mo Vaughn, Garrett Anderson and Troy Glaus had at least 35 in 2000.

– Andrew Heaney pitched OK, but he wasn’t great. He lasted just five innings and even though he did not allow a run, he allowed nine baserunners – six via hits, two via walks and he hit a batter. He made good pitches to get out of jams, but he would help the team even more if he could go deeper into games. It was Heaney’s second consecutive outing in which he went just five innings and he is averaging just a hair under six innings per start on the season. Four of his six starts in August were 5 1/3, 5 2/3, 5 2/3 and 3 1/3 innings. Considering Heaney had four consecutive starts of at least seven innings from June 30 to July 20, one has to wonder if Heaney – a rookie – is starting to feel the fatigue of a long season that for him began in the minors. He has gone seven innings in just one of his past 10 starts. Heaney is 7-3 with an ERA of 3.32. Nothing wrong with that, on the surface.