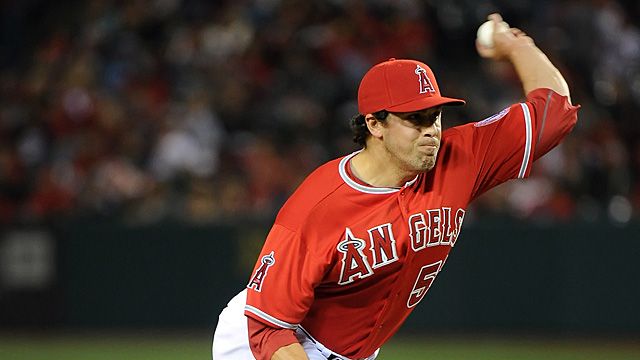 Just as Michael Roth is figuring things out as a reliever, his future as a starting pitcher might get in the way.

There’s no question the Angels have a decision to make on their second-round draft pick from a year ago, whose scoreless inning Sunday marked his fourth straight appearance without allowing a run. “I’ve been on time, rhythm wise,” he said.

Yet the 23-year-old left-hander was drafted as a starting pitcher out of the University of South Carolina, and that’s how he has been used during his brief time in the minors.
END_OF_DOCUMENT_TOKEN_TO_BE_REPLACED

END_OF_DOCUMENT_TOKEN_TO_BE_REPLACED

Billy Buckner is a good story, beyond his name.

When the Angels added him to their 40-man roster and flew him in from Triple-A Salt Lake on Thursday, it was Buckner’s first major-league opportunity in three years. The last go-around didn’t end well – he pitched four innings and allowed seven runs in each of his final two games with the Kansas City Royals in May 2010 – and it’s been a long road back. The Angels are his fourth organization since then.

Just a year ago, he was a free agent coming off surgery to remove bone spurs in his right (pitching elbow). He signed a minor-league deal with the Boston Red Sox and began the season with Double-A Portland (Maine) of the Eastern League.

“They gave me a chance to come back and pitch,” Buckner said.

The Angels’ unfortunate reality — a pitcher who just last year was in Double-A is being counted on to stabilize the pitching staff — is Buckner’s great fortune. As is his collection of Bill Buckner swag.
END_OF_DOCUMENT_TOKEN_TO_BE_REPLACED

The Angels have used 20 pitchers this season and could soon hand the ball to a 21st.

One day after he allowed four runs in two innings in a spot start against the Kansas City Royals, Barry Enright was designated for assignment. That allowed the Angels to select the contract of Triple-A right-hander Billy Buckner and add him to the major-league roster Thursday.