If Hawpe isn’t claimed by another team, the Angels are responsible for paying the remainder of his 2013 salary.

Hawpe batted .185 (5 for 27) as an Angel after his contract was purchased from Triple-A Salt Lake on June 8. 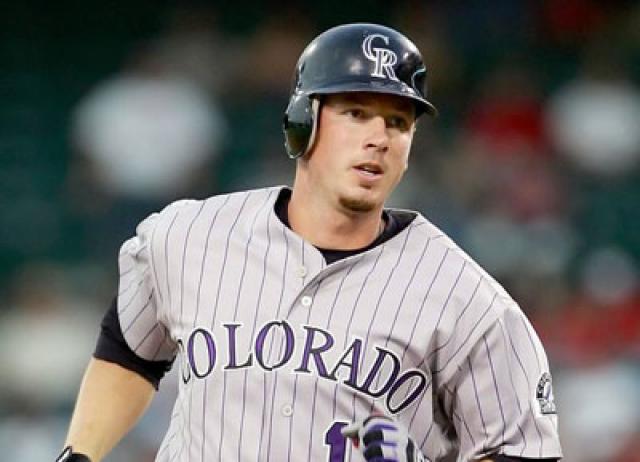 Kole Calhoun almost made the Angels as a fourth/fifth outfielder out of spring training. He didn’t, was sent back to Triple-A Salt Lake, and suffered a freak injury in the Bees’ first game of the season: Calhoun broke the hamate bone in his right hand swinging a bat in his fourth plate appearance of the game.

Calhoun had surgery Tuesday and is expected to miss at least a month.

On Wednesday, the Angels announced they’ve agreed to terms with veteran major league outfielder Brad Hawpe on a minor-league contract. He’ll report to extended spring training at first, but figures to absorb some of Kalhoun’s innings in Salt Lake soon.

Hawpe, 33, last appeared in the majors with the San Diego Padres in 2011. He was limited to just 62 games that year because of a strained finger and and elbow injury that ultimately required Tommy John surgery in August.

Last year Hawpe batted .260/.382/.382 for Double-A Frisco of the Texas League and played exclusively in right field after shifting in at first base with the Padres.