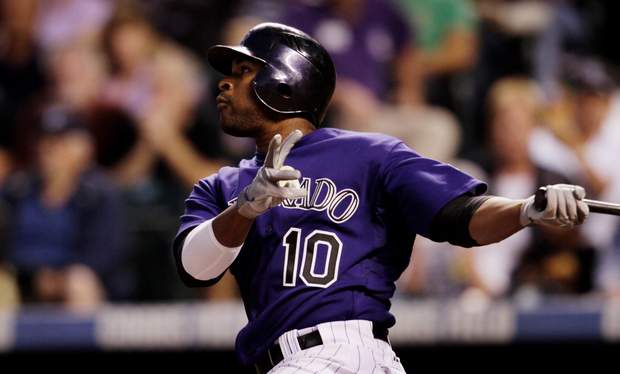 Chris Nelson was claimed by the Angels on Saturday, after he was designated for assignment by the New York Yankees, and added to the major-league roster Sunday. (Associated Press photo)

For almost nine years the Colorado Rockies were the only organization Nelson knew, beginning the day he was drafted ninth overall in 2004 and ending when he was traded to the New York Yankees on May 1. After playing 10 games for the Yankees, Nelson was designated for assignment on May 15. On Saturday he joined the Angels, his third organization in three weeks.

“We’ve been living out of a suitcase for too long now,” Nelson said.

END_OF_DOCUMENT_TOKEN_TO_BE_REPLACED

Sunday might have been the busiest day of them all.
END_OF_DOCUMENT_TOKEN_TO_BE_REPLACED

Veteran utilityman Bill Hall, who is trying to make the Angels as a non-roster invitee to spring training, suffered another injury setback Wednesday morning.

The 33-year-old “felt his calf tighten up on him in infield (drills),” manager Mike Scioscia said after the Angels lost 8-6 to the San Diego Padres in Peoria, Arizona. “We’ll evaluate him day to day.”

Hall, who hasn’t played in a Cactus League game since Feb. 27, was attempting to come back from an injured right quadriceps muscle when he suffered the calf injury. He had three hits, all doubles, in nine Cactus League at-bats.

If he’s able to rediscover the hitting stroke that allowed him to play no fewer than 110 games in a season from 2004-10, Hall would give the Angels an intriguing option as a multi-position backup — but only if he’s healthy. If infielders Luis Rodriguez (.375 BA/.760 OPS), Andrew Romine (.323 OBP, four steals) and Luis Jimenez (.308/.886) perform well, Hall’s chances of making the Angels’ opening-day roster will only diminish the longer he sits.

He had the following message for fans on Twitter Wednesday afternoon:

PLEASE EVERYONE. I REALLY REALLY NEED U GUYS TO PRAY FOR ME…please keepe in ur prayers

SCOTTSDALE, Ariz. — Although Pablo Sandoval had pretty much run out of steam by the time he got to third, Kung Fu Panda kept on chugging.

The San Francisco Giants’ hefty slugger scored the go-ahead run and maybe burned off a few ounces of flab along the way, getting the defending champions’ spring off to a rollicking start.

The last time Sandoval was in a major league game, he wrapped up the World Series MVP award in San Francisco’s sweep of Detroit last October. Although he played in Venezuela’s professional league this winter and will play in the World Baseball Classic soon, he acknowledges he’s a few weeks and several pounds away from recapturing his postseason form.

“It looked like home plate was running away from me,” Sandoval said.