Sunday marked Mike Trout‘s 23rd game as the Angels’ number-two hitter. Say what you want about the Angels’ record in the meantime — they’re 9-13 with him batting second compared to 2-6 when he led off — but the move seems to have helped the second-year outfielder.

The move hasn’t always connected Trout, Albert Pujols and Josh Hamilton, which was one of manager Mike Scioscia‘s goals when he made the move seven games into the season. Hamilton was demoted to fifth in the batting order prior to Sunday, when Pujols got the day off and Hamilton batted third.

But Mark Trumbo has stepped into the cleanup hole and given the Angels the dangerous 2-3-4 combo they were looking for. Trumbo has home runs in five of his last six games and is batting .295/.363/.557.

Here’s what Mike Scioscia had to say when asked if moving Trout to the number-two hole has had its desired effect:

“Primarily, what Mike really needs to be in a position to drive in runs,” Scioscia said. “He’s a guy you want guys on base with. He can draw a walk with guys on base to really set the table for the middle of the lineup. Connecting him, Josh and Albert is one thing we talked about. There’s no doubt he’s getting more opportunities with runners in scoring position.

“I think it’s accomplished some things. It maybe got Mike back to where he needed to be to be more productive driving in some runs. Right now Josh isn’t connected with them the way we envisioned. Mark is. Mark’s a guy that, I think there’s no doubt Mark Trumbo’s gotten more out of being connected with Mike and Albert than anywhere else he’s hit in the lineup. I think it’s going to be tough to evaluate all the components until Albert and Josh hit stride.”

Mark Trumbo’s power is unquestioned. Who can save the Angels’ sinking ship remains to be seen. (Keith Birmingham/Staff Photographer)

Many comparisons have been made between the 2013 Angels and the 2012 Angels, with both teams beginning the season with high expectations and underachieving badly in the first month. Here’s another point to consider: The Angels’ answer a year ago didn’t come from their major-league ranks.

Rather, it came from Triple-A Salt Lake in the form of Mike Trout. Trout was batting .403/.467/1.091 when he bid the Pacific Coast League adieu, likely for a long time. The biggest problem facing the Angels now is health, with Ryan Madson, Kevin Jepsen, Mark Lowe, Sean Burnett and Jered Weaver forming a potent disabled list. If the five are healthy, 2013 is a different story already.

Since they’re not, it’s tempting – but disappointing – to peek at who’s waiting in the wings at Triple-A. There is no Mike Trout.

If you’re looking for pitching help, the Bees’ top five starters are 6-12 with a 6.43 earned-run average. That doesn’t include recent signee Kip Wells, who allowed two runs in seven innings in his debut Sunday. And it’s not as if the Angels aren’t already auditioning arms — they’ve used 18 pitchers already this season with a 19th, Ryan Brasier, on the 25-man roster waiting to make his debut. No major-league team has used more than 19 pitchers this season.

As position players go, Luis Jimenez has been a nice lift in the lineup and on the field since being recalled. But a number-nine hitter can only do so much; his three singles in 11 at-bats with runners in scoring position (.273, two RBIs) are sadly above average for this team (.225).

Bill Hall and Matt Young, two veterans who vied for major-league jobs in spring training, are hitting .206 and .241, respectively. Brad Hawpe is batting .237 with one home run to show for his first 38 at-bats.

So it’s probably not a question of who is ready to step up from Triple-A. It’s who will start pitching, who will start hitting, and who is available on the trade market?

It bothers me that I don’t think this is ridiculous. :- RT @mikedigiovanna: Can #Angels have Vernon Wells back? Please?

END_OF_DOCUMENT_TOKEN_TO_BE_REPLACED 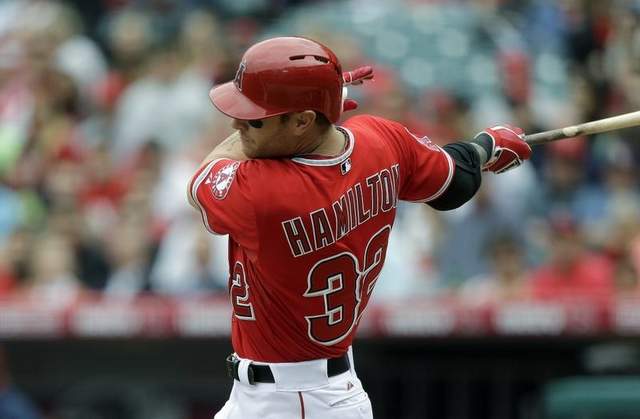 When the Angels and Rangers hooked up in spring training, that was enough to capture a few headlines. When the Angels visited Arlington, Texas in the opening week of the season, it captured even more.

The story was in a lineup card that saw Hamilton batting fifth for the first time as an Angel and for the first time since July 29-31 of last season. Mark Trumbo will bat cleanup and Albert Pujols remains the number-three hitter against the Rangers and left-hander Derek Holland.

END_OF_DOCUMENT_TOKEN_TO_BE_REPLACED 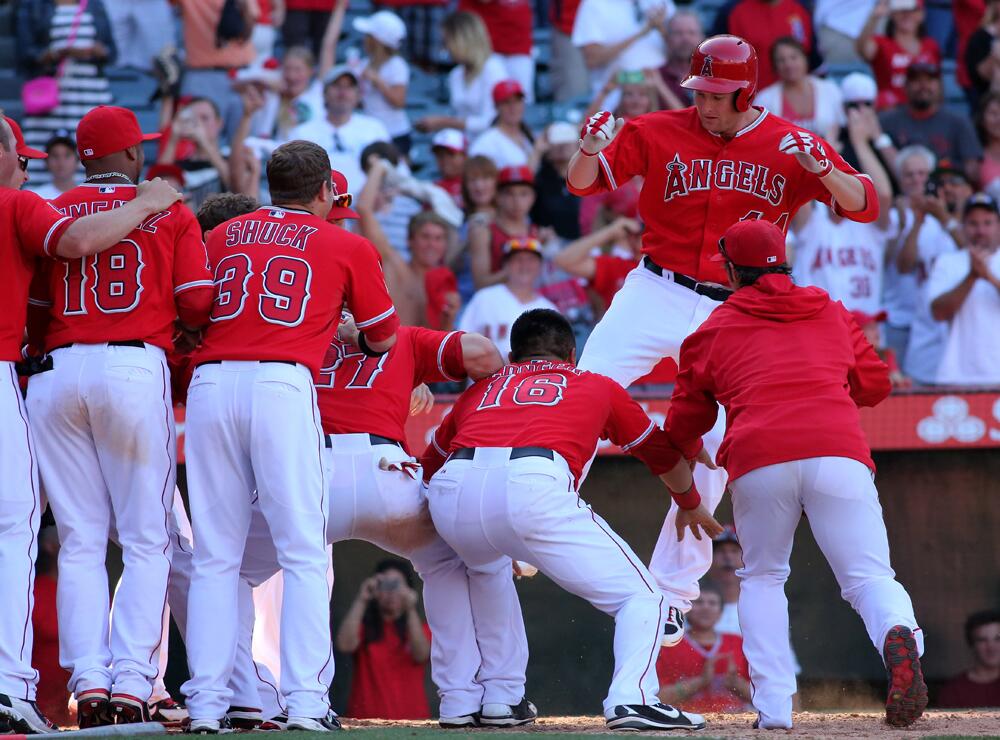 Mark Trumbo was on top of the world Sunday night. At least it felt like it, leaping onto home plate (“four inches” off the ground, he joked) to make his game-winning home run against the Detroit Tigers official. MLB.com posted the above photo on its Twitter account and Trumbo got an unexpected reaction from the Twitterverse.

“Tons of backlash,” he said.
END_OF_DOCUMENT_TOKEN_TO_BE_REPLACED