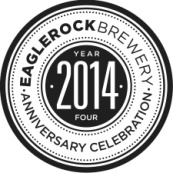 The event will take place from noon to 6 p.m. at the brewery, 3056 Roswell Street, Los Angeles.

Featured will be several special beer releases, including all of the brewery’s anniversary beers (including the this year’s, White Rabbit) and special cask brews.

Eagle Rock is upping the ante from last year’s celebration, with admission raising $5 to $20, but the number of included beers doubling from two to four. (Still not enough? Extra drink tickets will be available to purchase.)

A portion of the proceeds will benefit the Los Angeles Brewers Guild (led by the brewery’s Jeremy Raub) and Keep A Breast Foundation.

Party goers will again receive a commemorative anniversary glass, and will receive a raffle ticket to win Eagle Rock or Keep A Breast goodies.

Food will be available to purchase from as-yet-unnamed food trucks.