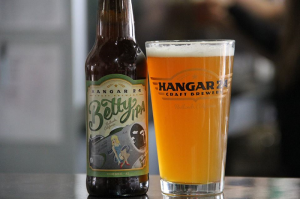 The name conjures up frenemies fighting for the affections of a redheaded teenager, or perhaps a leggy blonde pin-up.

As it turns out, it’s the latter which inspired the name of Hangar 24 Craft Brewery’s latest India Pale Ale.

The iconic 1943 poster of Betty Grable that graces the walls of Flo’s Airport Café in Chino inspired Hangar founder Ben Cook to name the American IPA “Betty,” according to a press release sent out today.

What’s now known as Betty first began as “Experimental IPA” during the brewery’s AirFest and fifth anniversary celebration last May.

The brew underwent several iterations, gaining feedback from customers and employees alike, with the brewers fine-tuning the flavor profile into what they were aiming for.

Betty, the first beer to be added to the brewery’s year-round lineup since its Double IPA back in 2010, will be released Saturday (March 8) at the brewery, 1710 Sessums Drive, Redlands.

The release celebration will run from 11 a.m. to midnight, with food from Baby’s Badass Burgers available noon to 8 p.m. and live music throughout the day from Robert Jon & the Wreck, Maria Sweet, and The Calicos.

It’s also a fundraiser for Iraq and Afghanistan Veterans of America, as $1 of every Betty IPA pint, growler, six-pack and T-shirt sold during the event will go to the organization.

Following the brewery launch, Betty IPA will make its way into stores, bars and restaurants across California, Arizona and Nevada.