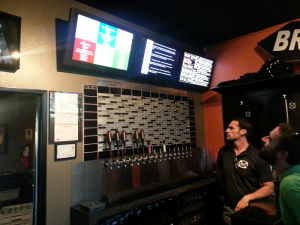 The twist is that they’re all at the same location.

We’ve been following the progress of Polymath Brewing Co. and Delicious Science Brewery for a while now, via their Facebook pages.

The breweries (and a third, Seven Brethren Brewing aka Seven Brothers Brewing) are now operating under the Brew Crew, Inc. umbrella.

This is the first setup I’ve seen with multiple breweries sharing a tasting room and production facilities…kind of a brewer’s co-op.

It appears that there are several goals for Brew Crew. One is to eventually open similar breweries (with different brewers) in other cities.

The other is to grow the breweries to a point that they can branch out on their own.

We stopped by this week and found a clean (if smallish) tasting room, with plenty of board games for customers, and a friendly staff willing to help with suggestions or questions that need answering.

Oh, and a great selection of delicious beer.

The breweries are open seven days a week: Noon to 9 p.m. Saturday and Sunday, and 3 to 9 p.m. the rest of the week. You’ll find them at 11626 Sterling Ave., Suite G, in the same building as Wicks Brewing Company.