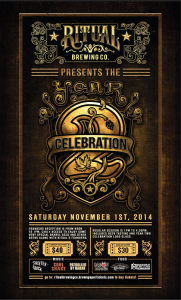 On Saturday (November 1), Ritual Brewing Co. in Redlands will be celebrating its second anniversary and has several special brews lined up for the event.

In addition to the release of 2014 Big Deluxe Imperial Oat Stout, the brewery will have several variations on hand.

Attendees will have the chance to sample 2013 Big Deluxe and several barrel-aged versions, along with Big Deluxe brewed with vanilla, Parliament Chocolate, Stell Coffee and other flavors.

Food will be available from Pappas Artisanal, Bacon Mania and à la minute.

A trio of bands — Skeeter Truck, Soul Shake and Patrolled by Radar — are set to perform.

The Year Two anniversary celebration is scheduled for 1 to 4:30 p.m., with a founders party at noon, at the brewery, 1315 Research Drive.

Tickets are $30, plus an extra $10 to also attend the founders party. Designated driver tickets are available for $15.

Tickets are available at the brewery’s tasting room or online by clicking here.