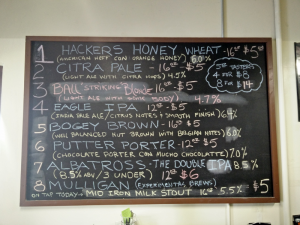 The Inland Empire brewery boom continues, with a new brewery in Colton and two set to open in the High Desert.

3 Iron Brewing Company opened back at the beginning of April at 898 S. Via Lata, Suite A, Colton. I stopped in last week to check it out and found some friendly folks serving delicious beer. They’ve got eight taps serving a variety of styles, from IPAs to porters.

For now, 3 Iron is open Thursday through Saturday.

The High Desert will get its second brewery when Desert Barn Brewery opens Monday (June 1) at 11352 Hesperia Road, Suite B, in Hesperia.

Desert Barn is also sponsoring and judging the homebrew competition at this year’s San Bernardino County Fair, which concludes its run on Sunday (May 31).

Off the Grid Brewing Company has been around several years now — I first sampled their beer at the Palm Springs Props & Hops Craft Beer Conclave back in 2012 — but just recently moved into its own location.

The brewers had been brewing out of Inland Empire Brewing Company in Riverside, but now have set up shop in their hometown of Apple Valley at 13615 John Glenn Road, Suite A. No opening date has been set, but updates are being posted on the brewery’s Facebook page.

In Pomona, Homage Brewing was successful in its Kickstarter campaign this week, raising a total of $13,030 toward getting the brewery, 281 S. Thomas St., Suites 101 & 102, up and running. Follow ’em on Instagram and Twitter for updates.