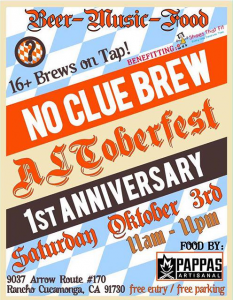 The brewery is dubbing the event its ALToberfest party.

No Clue is releasing an ALToberfest Anniversary Ale and several other special release beers for the occasion, including the following:

More than 16 beers are promised to be on tap for the event.

Food will be available from Pappas Artisanal and Maegs Bakes Cakes.

A portion of the proceeds will benefit Claremont-based Shoes That Fit, an organization that provides footwear and other necessities to needy schoolkids.