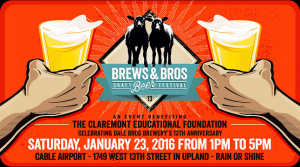 Besides Dale Bros., at least 39 breweries, cideries and wineries are scheduled to pour at the event, which will take place rain or shine.

More than 80 beverages are planned to be served at the event, which celebrates the brewery’s 13th anniversary.

Advance tickets are available at the brewery or by clicking here (service fee applies). Ticket prices go up at the door.

Proceeds from the event will benefit the Claremont Educational Foundation.

Participants include many from across Southern California:

Want free beer? The brewery is looking for volunteers to work before, during and after the event. Volunteers will receive a T-shirt, a commemorative glass, and a wristband for beer tasting in exchange for working a three to four-hour shift.