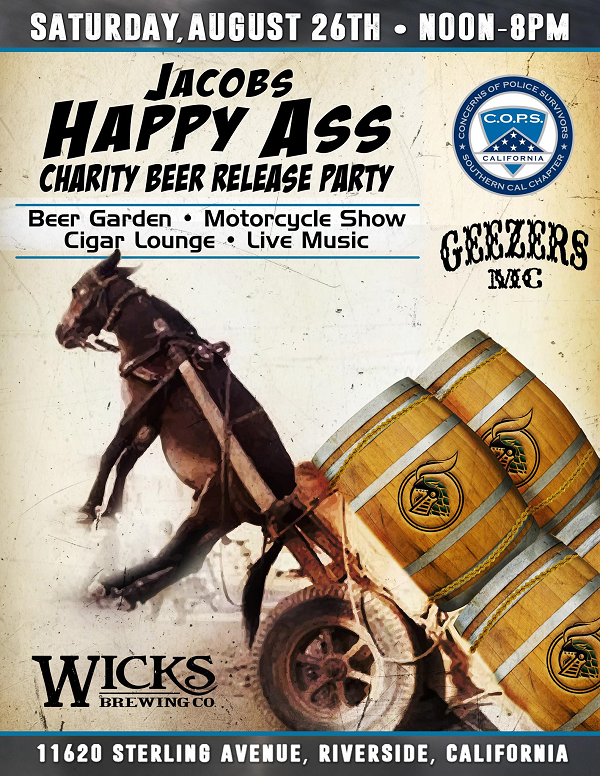 Riverside’s Wicks Brewing Co. is hosting a fundraiser Saturday (August 26) in support of the Southern California Chapter of Concerns of Police Survivors, an organization dedicated to helping the families of fallen police officers.

The brewery will raise funds through the sales of its new beer, “Jacobs Happy Ass Stout,” a white stout brewed with coffee and cocoa nibs.

The beer was created in memory of Riverside Police Detective Charles “Doug” Jacobs III, who was gunned down while assisting with a response to a noise complaint on January 13, 2001.

You see, Jacobs was a homebrewer and he and his friends, who called themselves “The Happy Ass Brewing Company,” had finished a batch of beer just before that fateful day.

The new beer was made under the guidance of Jacobs’ family.

Barbecue will be available from Cowboy West Productions from noon to 4 p.m., including chicken, tri-tip, pulled pork and hot links. Proceeds from the food will also benefit SoCal C.O.P.S.

The event — which will also feature a motorcycle show, cigar lounge and live music — runs from noon to 8 p.m. Wicks Brewing Co. is at 11620 Sterling Ave., Suite C.