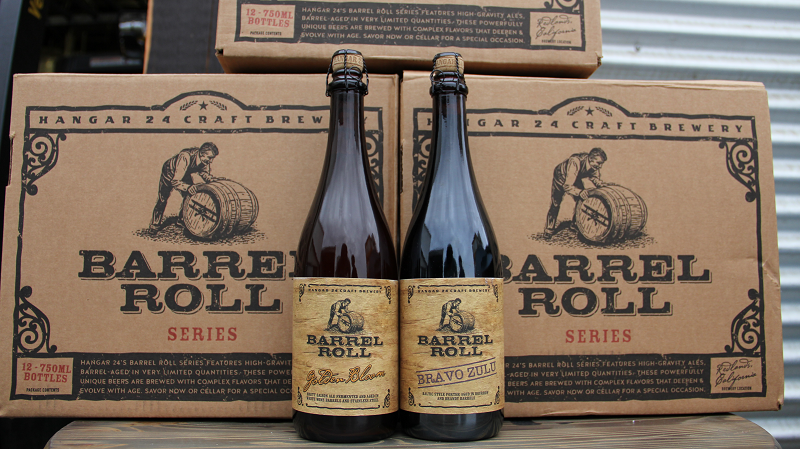 Hangar 24 Craft Brewery has been keeping its Barrel Roll Club members happy with quarterly releases, but it’s been since December of last year that any of those rare bottles have made it into the public’s hands.

The brewery is giving birth to two new releases: “Bravo Zulu,” the brewery’s first Baltic-style porter, and “Golden Bloom,” a farmhouse saison fermented with Brettanomyces, also a first for the brewery.

“Bravo Zulu,” named after the naval signal used to communicate the recognition of a job well done, has characteristics of rich dark fruit, toffee and caramel flavors. It was aged for eight months in bourbon and brandy barrels, adding notes of vanilla and mocha.

It’s the stronger of the two new offerings, clocking in at 10.9% ABV.

“Golden Bloom,” brewed in honor of the state’s transformation from drought to super bloom, uses two separate yeast strains, as the base underwent parallel fermentation between white wine barrels and a stainless steel vessel before being blended together for further maturation.

“Golden Bloom” offers aromas of pineapple, white grape and clove, combining with notes of peppercorn and a restrained Brett funk.

A limited number of corked 750 mL bottles of “Bravo Zulu” and “Golden Bloom,” priced at $25 each, will be available at the Redlands brewery, 1710 Sessums Drive, beginning at 11 a.m. Saturday.

Stay tuned for more Barrel Roll fun, as Hangar 24 is soon to announce the date of this year’s Pugafest, a day-long celebration of barrel-aged goodness, highlighted by Pugachev’s Cobra variants, as well as vertical tastings to compare past years of the stout, to be held at the Redlands taproom.