Vinny Pazienza had quite the career, winning major world titles in the lightweight and junior middleweight divisions before sustaining a broken neck in a car accident shortly after he stopped Gilbert Dele in the 12th round to win the junior middleweight championship in October 1991.

Pazienza was told he might not ever walk again. Not only did he walk, he came back and boxed over 10 more years. It’s the stuff movies are made of, so the movie of Pazienza’s life – entitled “Bleed For This” – will be released in November. Playing Pazienza will be Miles Teller. Martin Scorsese is one of the film’s executive producers. Check out the trailer.

Andy Vences of San Jose turned pro in October 2012, when he was 21. Nearly four years later, he is 15-0 with 10 knockouts. But he’s 25, so if he’s ever going to really make a run at something of substance, he’s going to have to step on the gas a little bit because he’s still fighting eight-rounders.

Vences will try to take a step in that direction when he takes on Moises Delgadillo of Mexico in the junior lightweight semi-main event July 9 at Tachi Palace Hotel & Casino in Lemoore (on UniMas). It’s still just an eight-round fight, but he’s slated to fight again on Sept. 10 at the same venue, which would give him three fights in 2016 with the ability to have at least one more before 2017.

Vences said the focus in training camp has been to get stronger and faster, and he’s anxious to display the progress he’s made in those areas.

“This fight is very important to me,” Vences said. “I want to do well and show my improvements. I felt that we worked harder and with more intensity for this fight and it will show in the ring.”

What Vences would seem to need to do after this fight – assuming he’s victorious – is tangle with better opposition. Delgadillo is just 15-15 -2 with eight knockouts. Still, Vences is taking Delgadillo seriously.

“I looked at some videos of Delgadillo and he is a come-forward, high-volume puncher that likes to go toe-to-toe in the ring,” Vences said. “We have worked on some things specifically for him, like putting and landing more combinations on him. I know he is very hungry and will come to win, so I have to be at my best to win this fight.”

Jarrell Miller of Brooklyn is looking to make a name for himself in the heavyweight division. Although he has a record of 17-0-1 with 15 knockouts against very mediocre competition, he apparently realizes that this game is about a lot more than just power.

This past Saturday’s heavyweight title fight between champion Anthony Joshua of England and Alhambra’s Dominic Breazeale showed Miller that, if he didn’t already know it.

“I’m going back to basics in this camp,” said Miller, who next will take on journeyman Fred Kassi on Aug. 19 at Rhinos Stadium in Rochester, N.Y. (on Showtime). “I’m an advanced fighter, but there are a couple of things I’ve wanted to work on. It’s easy for heavyweights to rely on power and forget about technique. You see what happened to Dominic Breazeale against Anthony Joshua?  His power didn’t mean jack because there was no technique behind it.  I want to be the kind of fighter who puts his technique first and power last.”

Breazeale was 17-0 with 15 knockouts when he stepped into the ring with Joshua, and Joshua stopped Breazeale in the seventh round. Breazeale’s lack of technique – he didn’t don the boxing gloves until he was 23 – was evident, especially when compared to Joshua’s.

Kassi is 0-3-1 in his past four bouts. But the losses were to Amir Mansour, Breazeale and Hughie Fury; the draw was against contender Chris Arreola. Kassi (18-5-1, 10 KOs) seems unfazed by Miller’s accomplishments.

“I approach Jarrell like all young fighters,” said Kassi, 36, of New Orleans.  “I’m a seasoned pro that has fought top-tier opponents. Jarrell will have to bring his ‘A’ game against me. He’s got size and power, but it’s nothing I haven’t seen.”

Kovalev on July 11 in Russia will defend his three titles when he takes on Isaac Chilemba of South Africa (on HBO). Kovalev, who is tentatively slated to then defend against former super middleweight champion Andre Ward on Nov. 19 in Las Vegas, is 29-0-1 with 26 knockouts.

Check out some of his work on this video courtesy of HBO.

Showtime’s series “ShoBox: The New Generation” will celebrate its 15th year with a four-fight telecast July 22 from Foxwoods Resort & Casino in Mashantucket, Conn. And the headliner could be a good one.

In it, Adam Lopez (15-0, 7 KOs) of San Antonio puts his undefeated record on the line when he tangles with once-beaten Roman Ruben Reynoso (18-1-1, 7 KOs) in the 10-round super bantamweight main event.

Lopez, 25, sets up the bout by suggesting he may have to avoid some haymakers from Reynoso.

“… He is kind of wild, but guys like that are hard to fight because you don’t know where the punches are coming from,” Lopez said. “But we will be prepared for anything.”

Reynoso, of Argentina, has never fought in the U.S. He’s hopeful a victory will earn him some big rewards.

Mario Barrios has come a long way in a short time. At age 21 and just 2 1/2 years into his pro career, he is 15-0 with eight knockouts and ranked as high as No. 12 by one governing body.

Barrios on July 9 will take on Devis Boschiero (39-4-1, 21 KOs) of Italy in the super featherweight main event at Sun National Bank Center in Trenton, N.J. (on ESPN).

Boschiero is ranked No. 8 in the same poll that ranks Barrios.

“This is what I’ve worked my whole life for, to be fighting in main events on national television,” said Barrios, of San Antonio. “I’m confident that I’ll be able to the full 12 rounds if need be.  My goal is to get the knockout, though. I really want to make a statement in this fight.”

(Barrios has never been scheduled for more than eight rounds.)

Considering the division in which Barrios toils, he needs to make a statement every time out because it is brimming with ferocious talent. Barrios gets that.

“It’s a very tough division loaded with a lot of great fighters,” he said. “I would say (Vasyl) Lomachenko, (Jose) Pedraza and (Francisco) Vargas are the top dogs for now. (Orlando) Salido is also up there. It’s one of the toughest divisions in boxing. I’m hoping I can become a champion in this division. A victory against Boschiero puts me right there to challenge for the title. I’m a hungry fighter and everyone will see that on July 9.” 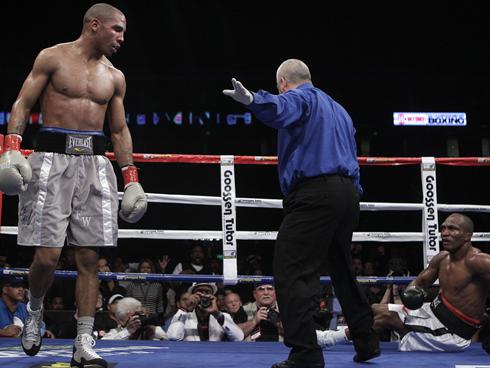 Mikey Garcia has not fought in nearly 2 1/2 years, no thanks to contractual issues with his former promoter – Top Rank Inc. Don’t look now, but Garcia is back and the ultra-talented former world champion will make his long-awaited return to the ring when he takes on Elio Rojas on July 30 at Barclays Center in Brooklyn (Showtime).

Garcia was one of the top pound-for-pound fighters in the world before his long layoff, having won world titles in the featherweight and super featherweight divisions while going 34-0 with 28 knockouts. Suffice to say, he can’t wait to get back in there.

“I just have to get one fight in,” said Garcia, 28, of Oxnard. “This first fight with Elio will be somewhere between 135 (lightweight) and 140 pounds (junior welterweight), but I want to fight at 135 and win a title there. I want to win a title there and keep going after champion after champion. Now that all that (uncertainty) is behind me, I look forward to the next stage of my career. This next stage of my career will be what people remember me for.”

Garcia last fought on Jan. 25, 2014 when he defended his super featherweight title with a unanimous decision over Juan Carlos Burgos at Madison Square Garden in New York City.

Garcia and Rojas (24-2, 14 KOs) – a former featherweight champion from the Dominican Republic – will fight underneath the featherweight title fight between champion Leo Santa Cruz of Lincoln Heights and Carl Frampton of Northern Ireland.

Light heavyweight champion Sergey Kovalev has not fought in his native Russia since December 2011, a year and eight months before he won the first of his three belts.

Kovalev will bring those titles back home when he defends them against Isaac Chilemba on July 11 in Ekaterinburg, Russia (on HBO).

Kovalev is training outside of the U.S. for the first time since beating Nathan Cleverly in August 2013 to win his first belt. Since he likes training at altitude, Kovalev recently completed the first phase of his camp at the mountains of Armenia.

“I try to look for mountainous regions which provide the right elevation and terrain for my conditioning training (biking, running),” Kovalev said. “Armenia is well-known for their mountains and terrain, plus it was also a good opportunity to get away from the attention, to focus solely on training.”

Kovalev liked that the Russian national team was training nearby.

“The Russian Boxing Olympic team had their training camp in the same area (Tsaghkadzor, Armenia) as well, so I had good company around me, the right training mentality and focus level,” he said. “Help from the local trainers and Russian national team boxers was quite handy with finding the new trails for my runs and biking.”

It was good for Oscar Molina of Norwalk to get some national television exposure. Unfortunately for him, he couldn’t take advantage of it.

Molina this past Saturday faced another undefeated junior middleweight – Jarrett Hurd – underneath the welterweight title fight between Keith “One Time” Thurman and Shawn Porter, won by Thurman via narrow decision at Barclays Center in Brooklyn (on CBS).

A victory would have been the biggest of Molina’s career, but he was stopped in the 10th round by Hurd. Molina didn’t agree with the stoppage. But he was well behind on the scorecards, so he wasn’t going to win, anyway, unless he somehow managed to stop Hurd in that final round.

Molina was decked in the first round. He said he wasn’t in trouble then, either.

“I went low and I had my head down and he caught me with that uppercut in the first round,” said Molina, 26. “He got me with a shot I wasn’t expecting, but it was definitely a flash knockdown. I wasn’t hurt.”

Molina blamed himself for not being able to figure out Hurd’s defense, thus resulting in Molina smothering his own punches. He vowed to return in better form.

“This was a big opportunity for me and I felt like I fought a good fight,” he said. “I’m going to come back stronger. We’re going to work on a lot of things and get back in there.”