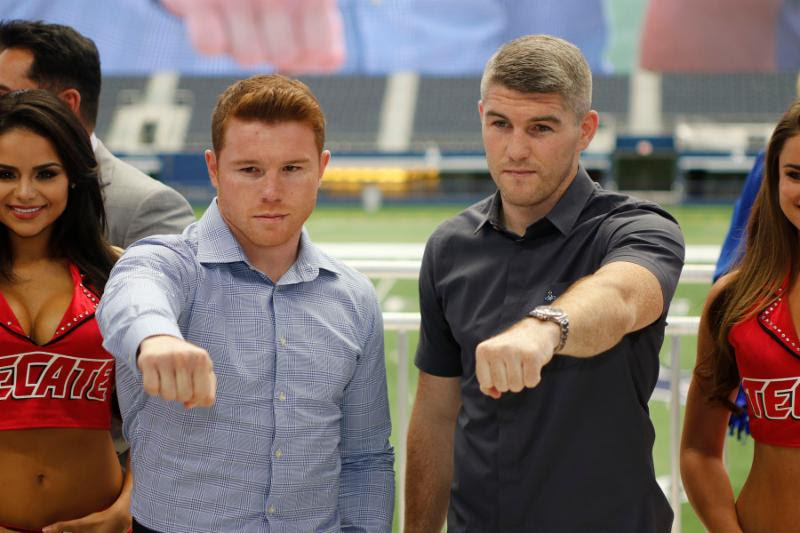 A lot of people around the world of boxing had to have been upset upon hearing that Golden Boy Promotions would not entertain the thought of its Saul “Canelo” Alvarez fighting middleweight champion Gennady Golovkin until September 2017. You can bet Liam Smith wasn’t one of them.

Smith (23-0-1, 13 KOs) is a junior middleweight champion from England. Thanks to Golden Boy balking at Golovkin, Smith will now be able to put his name on the worldwide map by defending his title against Alvarez on Sept. 17 from AT&T Stadium in Arlington, Texas (on HBO pay-per-view).

“I am very excited,” Smith said at Monday’s news conference in Arlington. “I have asked for a top name for a very long time and when Canelo’s name came to the table, it was an automatic ‘Yes.’ We are coming very prepared for this fight, and I’m coming to win.”

After his sixth-round knockout of Amir Khan on May 7 in Las Vegas, Alvarez (47-1-1, 33 KOs) talked a lot of trash, challenging Golovkin and saying he would have no problem fighting him at the full 160-pound limit, something Alvarez had previously said he wasn’t interesting in doing.

But with an imposed deadline by the WBC to make the fight with Golovkin, Alvarez and Golden Boy put out a statement saying Alvarez would relinquish his middleweight title rather than adhere to the deadline.

Then came the news from Golden Boy that it would not even think about Alvarez fighting Golovkin until September of 2017. Alvarez took plenty of hits in social media.

To be fair, this whole thing is probably more on Golden Boy than Alvarez. But he’s going to have to take a lot of the heat.

Anyway, he promised fans a good fight against Smith.

“I had to work for my birthday, so I’m here to work,” said Alvarez, who turned 26 on Monday. “I’m very happy to be back in Texas again, in this beautiful stadium. I’m going to take this fight seriously and prepare like always. I know how I’m going to have to train. I like to give the fans a great fight, and that is what I will prepare for.”