Tickets for the May 9 junior middleweight fight between Saul “Canelo” Alvarez and James Kirkland slated for May 9 at Minute Maid Park in Houston (on HBO) are, not surprisingly, selling like hot cakes.

“In just two hours since they went on sale, 15,000 tickets have been sold for May 9,” promoter Oscar De La Hoya said.

There is no title on the line in this one, but there doesn’t have to be as this figures to be one heck of a fight.

Saul “Canelo” Alvarez of Mexico and James Kirkland of Austin, Texas on Tuesday played host to a news conference at Minute Maid Park in Houston promoting their junior middleweight fight there May 9 (on HBO). The card is being staged by Oscar De La Hoya and his Golden Boy Promotions. The ultra-popular Alvarez, 24, is 44-1-1 with 31 knockouts. Kirkland, who will be 31 on March 19, is 32-1 with 28 knockouts. This should be an outstanding main event. Check out some of the photos from the news conference:

Saul ‘Canelo’ Alvarez, top, poses with fans at the news conference at Minute Maid Park in Houston. The fighters and their camps meet on the dais (middle photo) and James Kirkland, bottom, does interviews after the proceedings/Photos Tony Bullard, Hogan Photos, Golden Boy Promotions 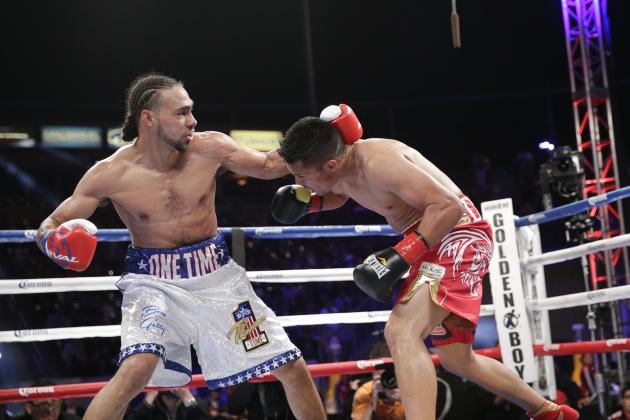 Alexander, 26-2 with 14 knockouts, was junior welterweight champion in 2009-11 before losing his belt to Timothy Bradley in January 2011. Alexander, 27, then won the welterweight title with a victory over Randall Bailey in October 2012, but lost it to Shawn Porter in December 2013.