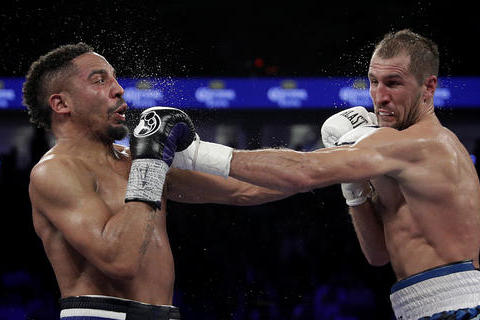 Training camp can be a grind. But Andre Ward of Oakland seems to embrace it.

Ward on Nov. 19 will challenge Sergey Kovalev of Russia for his three light heavyweight championship belts at T-Mobile Arena in Las Vegas (on HBO pay-per-view). Ward on Monday officially began training camp for the biggest fight of his career, but his head was already there.

“I’ve been in pre-camp mode for weeks now following my last fight, and have been mentally preparing for the work ahead of me,” said Ward, who will train in Hayward. “It’s an exciting feeling to be in full camp mode, where I can dedicate 100% of my mind, body and soul to the battle I am about to face. This is a fight that we have been working up to since last spring. The game plan hasn’t changed. I am here and I am ready.”

Ward’s trainer, Virgil Hunter, said this attitude is what separates Ward from others.

“No one beats Andre Ward when it comes to training camp,” Hunter said. “We’re going into camp with the mentality of ‘Another day, another fight, another win.’ His strive for perfection, work ethic and consistency is what makes him a champion.”

Going the distance with light heavyweight champion Sergey Kovalev (30-0-1) is not easy, as he has come through with knockouts in 26 of his 31 pro bouts. Isaac Chilemba went all 12 rounds with Kovalev in July. Chilemba lost a wide decision, but he is now getting his reward for surviving what most can’t.

Chilemba on Thursday was added to the Kovalev-Andre Ward card Nov. 19 at T-Mobile Arena in Las Vegas, an event that will be televised by HBO pay-per-view. Chilemba (24
-4-2, 10 KOs), of South Africa, will take on contender Oleksandr Gvozdyk (11-0, 9 KOs) of the Ukraine in a 10-round fight.

Chilemba is stoked. As is his new trainer, Roy Jones Jr.

“Isaac is a very exciting fighter with a lot of upside,” Jones said. “I am very excited to be training him and be part of his team now. I look forward to seeing much
bigger and better things from him in the future.”

Chilemba seems over the moon for the opportunity to work with Jones, who will one day be enshrined in the International Boxing Hall of Fame.

“I’m going to work with my idol, the person I look up to most, Roy Jones Jr.,” Chilemba said. “This is a huge opportunity for me to train with him, learn from him and
have him in my corner. Not only is he the greatest, but he cares and has love for the game.”