They say confidence breeds success. From the tone of his comments during a workout Tuesday from New York City, heavyweight contender Jarrell Miller is very confident. Whether that turns into success at the highest level remains to be seen.

Wilder holds one of the championship belts, and he’s coming off a thorough thrashing of Chris Arreola, who did not answer the bell for the ninth round of their fight this past Saturday at Legacy Arena in Birmingham, Ala.

Miller used Tuesday’s workout to call out Wilder, who is now 37-0 with 36 knockouts.

“Wilder is a wild man when he gets in that ring, but at the same time if you watch how he performs, he performs at a mediocre level against mediocre fighters,” MIller said. “If you stick him to a world professional athlete, like myself or top guys, you’ll see him bring even more. Not saying he hasn’t been in the ring with A-plus fighters yet, but you can see all his loopholes in his fighting style. It’s just a matter of time before he gets really exposed and I hope it is with me because I want that behind.”

MIller, who is 6-foot-4, suggested the 6-7 Wilder does not use his height to his advantage.

Chris Arreola isn’t the most talented heavyweight contender we’ve ever seen, but few have graced the ring with more courage.

Arreola on Saturday challenged Deontay Wilder for his heavyweight world title at Legacy Arena in Birmingham, Ala. Arreola was decked in the fourth round and rocked again  after getting to his feet. He somehow made it out of the round before eventually being stopped after eight rounds.

He explained how he did it.

“Let’s be honest, man,” Arreola said afterward. “It takes a real fighter to be in the ring with someone like him. He’s a big man. We’re in the heavyweight division, man, this is the hurt business. You have to know how to deal with adversity. I get punched, I’m going to get back up.”

Arreola (36-5-1, 31 KOs), of Riverside, failed for the third time to become the first fighter of Mexican descent to win a major world title at heavyweight. It’s doubtful he’ll get a fourth opportunity, as the 35-year-old was thoroughly dominated by Wilder.

Wilder (37-0, 36 KOs) broke his right hand and sustained a right biceps injury as well in the fight, otherwise he might have been able to get Arreola out of there sooner.

“It was early – the third or the fourth round,” Wilder said. “It was from an (awkward) punch. I hurt the hand first, and then the biceps.” 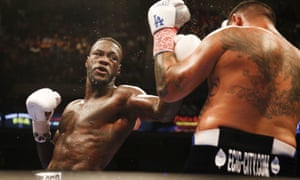 Chris Arreola at 6-foot-3 is four inches shorter than Deontay Wilder. But Arreola on Friday weighed in 20 pounds heavier than Wilder for their heavyweight title fight Saturday from Legacy Arena in Birmingham, Ala. (on Fox).

Wilder, of Tuscaloosa, Ala., is 36-0 with 35 knockouts. He’ll be looking to make the fourth successful defend of his title. Arreola, of Riverside, is 36-4-1 with 31 knockouts. He will be trying for the third time to become the first fighter of Mexican descent to win a major heavyweight championship.

Chris Arreola knows he doesn’t really deserve the title shot he’s going to have Saturday when he challenges Deontay Wilder for his heavyweight world title at Legacy Arena in Birmingham, Ala. (on Fox). Arreola has admitted as much. Based on Arreola’s recent work – he’s 1-0-1 with a no-decision in his past three bouts – Wilder knows that, too.

“We need someone who will fight with their heart and take this opportunity and make the most of it,” Wilder said at Thursday’s final news conference. “Does he deserve the title shot? No, he doesn’t. He knows it. But is Chris Arreola the perfect guy for this fight? Of course, he is.”

When Chris Arreola challenges Deontay Wilder for his heavyweight world title Saturday from Legacy Arena in Birmingham, Ala., he’ll be doing so in front of Wilder’s fans as Wilder is from Tuscaloosa, Ala.

That would seem to make Arreola even more of an underdog than he already is, but he claims he’s not worried about that part of his task.

“I expect him to have a lot of fans and he’s very deserving of that,” Arreola said of Wilder. “He’s made things happen in this state and this state is lucky to have a fighter like him. But no one can get in there with him. The fans can’t fight for him. I love the fans, but they’re just there to watch. It’s just me and Wilder in there Saturday.”

Arreola (36-4-1, 31 KOs), of Riverside, will be trying for the third time to become the first fighter of Mexican descent to win a major heavyweight title. He was stopped inside the distance by Vitali Klitschko in 2009 and by Bermane Stiverne in 2014.

Wilder is 36-0 with 35 knockouts and will be looking to make his fourth successful defense.

Arreola-Wilder will be televised live on Fox.

Deontay Wilder is 36-0 with 35 knockouts. To say he has been a knockout artist, would be an understatement. In Wilder’s mind, Chris Arreola  (36-4-1, 31 KOs) is tailor-made for him in this regard.

“When it comes to Deontay Wilder, people look for the knockouts and I deliver,” said Wilder, who will defend his heavyweight world title against Arreola on Saturday from Legacy Arena in Birmingham, Ala. (on Fox). “What separates me from other heavyweights is the fashion in which I knock guys out. I don’t just knock you out, I really put you out.
“Arreola definitely has a style prone to a knockout. He’s a pressure fighter who will come forward all night. That plays to my style. I love pressure fighters who give me a challenge. They keep me moving and thinking. I love the sweet science and the art to it.”

Chris Arreola had one chance to beat Vitali Klitschko when the two tangled for Klitschko’s heavyweight world title in September 2009 at Staples Center – get inside on the 6-foot-7 Klitschko. Arreola couldn’t, and he was stopped after 10 rounds.

Arreola this Saturday is challenging another champion standing 6-7 – Deontay Wilder. They will square off at Legacy Arena in Birmingham, Ala. (on Fox).

Arreola (36-4-1, 31 KOs), who stands 6-3, was asked during a recent conference call if he learned anything fighting Klitschko that could help him against Wilder.

“The main thing is I got to move my head, man,” said Arreola, of Riverside. “Vitali Klitschko clobbered me with jabs left and right. I believe he threw the most punches he had thrown in his career against me, and that’s because I just kept coming with the pressure.

“And the thing about it, I’ve just got to be a lot smarter and I’ve got to be more athletic about it because Deontay is a more athletic fighter than Klitschko is, a lot more athletic. And he moves a whole lot better around the ring.”

“And that’s going to be a big task in itself,” Arreola said. “And just come hard behind the jab and not get caught with that dangerous right hand he has.”

Arreola will be trying for the third time to become the first fighter of Mexican descent to win a heavyweight world title. He was stopped in the sixth round by Bermane Stiverne in his second try in May 2014.