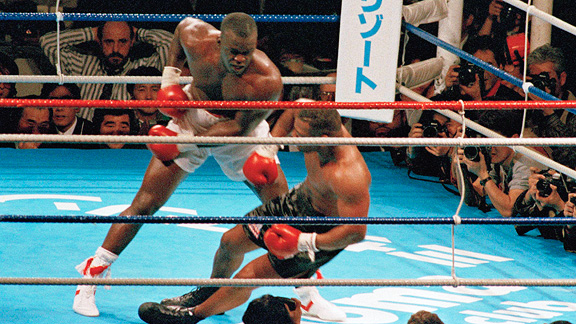 It was 24 years ago today – Feb. 11, 1990 – that James “Buster” Douglas absolutely shocked the world when he knocked out Mike Tyson in the 10th round in Tokyo, Japan.

Tyson was a 42-to-1 betting favorite, but a terrific jab by the taller and longer Douglas set the table for Douglas to come up with what today is still considered by many to be the biggest upset in a major fight in history.

“I’ve only seen ‘Canelo’ fight twice – against (Josesito) Lopez and (Austin) Trout,” Tyson said. “Trout gave him some trouble and he isn’t as experienced and as technically skilled as Floyd is. Floyd stays in tip-top shape and is a very relaxed fighter. He is at his peak. It’s going to be hard for anybody to beat Floyd now unless he doesn’t train.

“Floyd has transcended the game so much that the best fighters out there now try to emulate his style. Floyd wins by a decision.”

Former heavyweight champion Mike Tyson has joined the promoter’s ranks and on Aug. 23 will make his debut when his Iron Mike Productions stages two title fights at Turning Stone Resort Casino in Verona, N.Y., according to ESPN.com. The fights will be televised on ESPN2’s “Friday Night Fights.”

A story on ESPN.com said Tyson joined forces with Garry Jonas, whose company, Acquinity Sports, out of Florida had been around for two years and already had several fighters under contract. Acquinity Sports was re-named Iron Mike Productions.

The two title bouts will feature Argenis Mendez of Brooklyn defending his junior lightweight belt against Arash Usmanee of Canada, and Claudio Marrero of the Dominican Republic and Jesus Andres Cuellar of Argentina squaring off for a vacant interim featherweight belt.

Just received my advance copy of “The Bite Fight,” an in depth look at the June 28, 1997 heavyweight title fight rematch between Mike Tyson and Evander Holyfield at MGM Grand in Las Vegas, during which Tyson bit off a piece of Holyfield’s ear.

I haven’t read it yet, but it has several photos – most of them in color – and the foreword is by Tyson. One of his quotes in the foreword says a lot: “When I look back on my second fight with Evander, I still can’t believe that I bit his ear. I mean, what was I thinking? I wasn’t. I just reacted – and badly at that. The world would never look at me the same.”

I will be reviewing this book. Check back for that. I’m expecting a great read because of the subject and because the author, George Willis, has been a terrific boxing writer for a long time. He currently reports for the New York Post.

It’s due out in book stores in June.