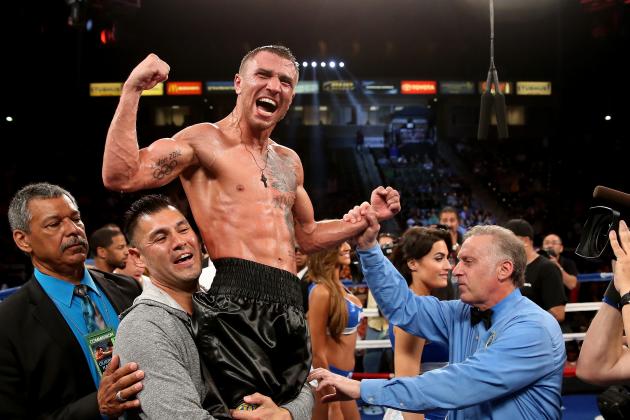 Manny Pacquiao is a small welterweight. Heck, he wouldn’t even be a big junior welterweight if he were still fighting in that division. It therefore wasn’t shocking to
hear his promoter – Bob Arum – talk about the possibility of Pacquiao at some point taking on super featherweight champion Vasyl Lomachenko.

Pacquiao (58-6-2, 38 KOs) on Nov. 5 will challenge Jessie Vargas for his welterweight belt at Thomas & Mack Center in Las Vegas (on Top Rank pay-per-view, $59.95). Three weeks later – on Nov. 26 – Lomachenko will defend his title against tough Nicholas Walters at the Cosmopolitan in Las Vegas (on HBO).

At the moment, Pacquiao and Lomachenko (6-1, 4 KOs) are fighting at 147 and 130 pounds, respectively. But Lomachenko told yours truly prior to his most recent bout this past June that he could see himself moving up another weight class or two, meaning lightweight (135 pounds) and as high as junior welterweight (140).

He can still make that weight?

“That’s what he says, sure,” Arum said Wednesday afternoon at Pacquiao’s camp in Hollywood. “I saw him sparring with Ray Beltran yesterday and Beltran’s a lightweight
and Beltran towered over him. He was so much bigger.”

If ever there was a case to use the term “potential Fight of the Year candidate,” it would be regarding the Nov. 26 super featherweight title fight between champion Vasyl Lomachenko and Nicholas Walters at the Cosmopolitan in Las Vegas (on HBO).

Lomachenko, who won gold medals for Ukraine in the 2008 and 2012 Olympic Games, will be making the first defense of the title he won with a fifth-round knockout of Roman “Rocky” Martinez in June at Madison Square Garden. Lomachenko (6-1, 4 KOs) also has held a world title in the featherweight division.

Walters, of Jamaica, is  a former featherweight champion who once stopped Nonito Donaire in the sixth round of a title fight in October 2014. Walters is a vicious fighter with a record of 26-0-1 and 21 knockouts.

When talk of a fight between super featherweights Vasyl Lomachenko and Nicholas Walters began, the thought of it happening was enticing because these two guys are both mean hombres in the ring.

Well, an accord for the fight came to fruition Wednesday and the two will square off Nov. 26 at The Cosmopolitan in Las Vegas (on HBO).

Lomachenko (6-1, 4 KOs), of Ukraine, will be looking to make the first defense of the super featherweight world title he won from Roman “Rocky” Martinez via 5th-round knockout in June in New York City.

Lomachenko, who has also won a title at featherweight, said he’s stoked to be getting the opportunity “to test myself in the fight with the best.”

Walters (26-0-1, 21 KOs), a former featherweight champion who lost his belt on the scales prior to what would have been his fourth defense – against Miguel Marriaga – had a similar reaction.

“Any fighter can be knocked out no matter who he is,” said Walters, of Jamiaca. “I like fighting the best and I like fighting against great technical fighter like Lomachenko. Look at what happened when I fought a great technical fighter like Nonito Donaire. Lomachenko is great, he knows what he is doing in the ring.  But I always look for a knockout against whomever I fight.  If I can do it quick, I will.  This is the best fight out there in boxing today. It will be the Fight of the Year.”

Walters stopped Donaire in the sixth round of a featherweight title fight in October 2014 at StubHub Center in Carson.

With all the hoopla being created by middleweight champion Gennady Golovkin defending his title against Marco Antonio Rubio on Saturday at StubHub Center in Carson (on HBO), let’s not forget that the main undercard fight shouldn’t be too shabby, either.

In it, Nonito Donaire (33-2, 21 KOs) of San Leandro via the Philippines will defend his featherweight belt against Nicholas Walters (24-0, 20 KOs) of Jamaica. This could be a good one.

“I am very excited for this fight,” Donaire said.

He’d better be as Walters is no slouch. And he’s hungry to make an even bigger name for himself.

“This is my dream fight,” said Walters, who also owns a piece of the title. “It’s now the time to show everyone who is the best 126-pound world champion in the entire world.”