Received today, here is the 2015 66ers Opening Day roster, although it can change 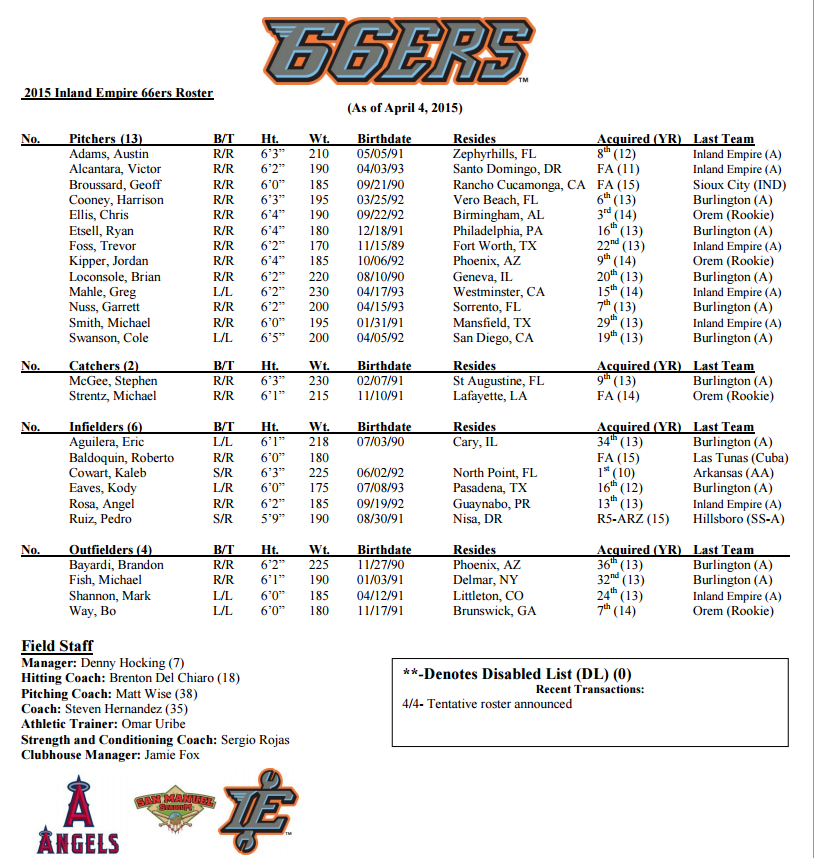 When you’ve had as many affiliations as the High Desert Mavericks have had over the years, they are bound to have connections with players from a multitude of organizations.
Since moving from Riverside in 1991, the Mavericks have had seven different affiliations, and are about to embark on their eighth, when the Texas Rangers come to town for 2015. And that doesn’t include the two years they were a co-op team in 1994-95 and had players from several organizations on their squad.

The California League is for players early on in their career path and that’s how two of this year’s World Series opponents: San Francisco Giants manager Bruce Bochy and Kansas City Royals slugger Billy Butler ended up there.

But Bochy was there in 1991, as a manager for the San Diego Padres’ affiliate trying to work his way up. He had a successful career as a player, but was just starting out as a manager.
It was actually his second season in the league, having managed the predecessor to the Mavericks, the Riverside Red Wave to a 64-78 record in 1990. In 1991, he was back, led the Mavericks to a decent but not overwhelming 73-63 record, then led them to an impressive playoff run (sound familiar?), by beating Mike Piazza, Pedro Martinez and the Bakersfield Dodgers (85-51) amnd then beating the Stockton Ports in the finals, who had beaten 92-44 San Jose in the semifinals.
I covered that team. It was my first real beat and I loved it. Bochy was patient with me (I was still in college and didn’t really understand how the minor leagues worked). While I was aware of how good Bochy was, most of my focus was on the rest of the team. But while Matt Mieske, Jay Gainer and J.D. Noland will be remembered by fans of the ’91 Mavs, they aren’t remembered for their careers. As it turned out, Bochy was the best prospect on that team.

Billy Butler was with the Mavericks in 2005, in their first season of a two-season affiliation with the Royals. Butler was a young 19-year-old kid with a ton of power (25 home runs in 379 at-bats), but no position to play. They tried him at third base, but that didn’t last long. He made 18 errors in 41 games at third, including four in one game that I witnessed personally. Shortly thereafter, they moved him to left field, where he could hit, but still couldn’t field: Among players with at least 18 games played in the outfield, he was last with a .932 fielding percentage. But he could still hit, and he had a decent eye, with 42 walks in 92 games and a .348 batting average his OPS of 1.054. As it turned out, his power was not High Desert-created. It was legit. And like Bochy, he was the biggest prospect on the team.

Now they’re facing each other. The 6-4, 245-pound Bochy and the 6-2, 225-pound Butler. Opponents in the World Series. Forever connected by Adelanto.