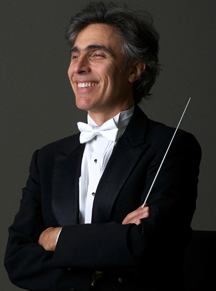 Don’t be surprised if the Pasadena Symphony adopts “The British are Coming” as the theme for an upcoming season. In biting England-like weather conditions today in the rotunda of the Pasadena City Hall, the PSO named British-born David Lockington as the orchestra’s next music director and also announced that another Brit, Nicholas McGegan, would serve in the newly created post of principal guest conductor.

Both contracts are for three years. The 56-year-old Lockington (right) was already scheduled to conduct the opening concert of the orchestra’s 86th season Nov. 2 at Ambassador Auditorium, a program that will conclude with Stravinsky’s The Rite of Spring), and McGegan was slated for his third consecutive appearance with the ensemble on January 11, 2014 (LINK)

The remaining concert this season and the other three concerts next season will be led by previously announced guest conductors. Beginning in the 2014-2015 season, Lockington will conduct three concerts annually and McGegan will lead two.

Lockington is in his 14th season as music director of the Grand Rapids Symphony in Michigan. Since 2007 has served in a similar capacity with the Modesto Symphony in central California (Paul Jan Zdunek, CEO of the Pasadena Symphony Association, came to that position from the Modesto Symphony). Lockington is also principal conductor of Spain’s Orquestra Sinfonica del Principado de Asturias. He said today he would continue in those positions but expects to spend several weeks in Pasadena beyond those when he conducts.

An accomplished cellist before turning to conducting, he and PSO Principal Cellist Andrew Shulman played cello together in the National Youth Orchestra of Britain more than 30 years ago and Lockington once served as assistant principal cellist with the Denver Symphony). Lockington has also been music director of the Long Island Philharmonic, New Mexico Symphony, Cheyenne Symphony and the Ohio Chamber Orchestra.

McGegan, 61, is international renowned as a baroque music specialist but in recent years has been broadening his conducting repertoire. Two years ago he led the PSO in a performance of Beethoven’s Symphony No. 3 (Eroica) and earlier this year was on the podium for the PSO’s performance of Mahler’s Symphony No. 4.

For 27 years, McGegan has been music director of the San Francisco-based Philharmonia Baroque Orchestra and Philharmonia Chorale. He’s also a familiar face on the Los Angeles Philharmonic podium and will lead the LAPO this August in Hollywood Bowl.

At the media conference, today Lockington called his appointment something of a homecoming. “My wife [concert violinist Dylana Jenson) has relatives in the Valley,” he explained, “so we’ve been coming here for years and we’ve always hoped that we’d establish a professional reason to keep returning.”

At the same time, Lockington said he was excited about the orchestra’s musicians and about reaching deep into the fabric of lives in Pasadena and the surrounding regions. “Those of who love live symphonic music have a responsibility to be forceful advocates for the arts,” he declared. “I’m particularly interested in connecting with young people and making a difference in their lives.” Lockington and his family (he and Jensen have four children) will continue to live in Grand Rapids but he expects to spend several weeks in Pasadena beyond those when he conducts.

While the PSO has been led by a series of guest coductors during the past three seasons (most of whom have acquitted themselves admirably), the orchestra’s boar and musicians were determining the scope of future leadership. “We were looking for someone with leadership, musicianship and inspiration qualities,” said Board President Diane Rankin (a former member of the PSO’s flute section).

Drew Dembowski, the PSO’s principal bass who was one of four musicians on the committee that recommended Lockington, said, “David was the clear choice of the musicians. I cannot ever remember being as excited as I am about this announcement today.”

Lockington has made five recordings with the Grand Rapids Symphony (one was nominated for a Grammy in 2007) and he and Jensen collaborated on a recording of the Shostakovich First and Barber Violin Concertos with the London Symphony Orchestra in 2010. 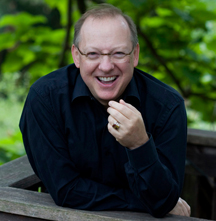 McGegan (*left) has more than 100 recordings to his credit and has garnered both a Gramophone Award and a Grammy nomination. Like Lockington, McGegan was educated at Canbridge (McGegan also studied at Oxford, the English equivalent of attending both USC and UCLA). McGegan received an OBE from Queen Elizabeth II in 2010.

At today’s media conference, Zdunek noted that the two appointments bring to a conclusion a turbulent period that began with the worldwide financial meltdown in 2008. During the past four years, the orchestra has:
• severed its relationship in May 2010 with music director Jorge Mester after a 25-year tenure;
• named James DePreist as artistic director after Mester’s departure; DePreist died last month month at age 76;
• had former Pasadena Pops music director Rachael Worby leave after a 10-year-run;
• appointed legendary composer Marvin Hamlisch as Worby’s successor, only to have him die unexpectedly last August;
• named Michael Feinstein as Hamlisch’s successor beginning this June;
• changed outdoor venues three times (ending at the Los Angeles County Arboretum);
• moved into its new indoor home, Ambassador Auditorium;
• named Peter Boyer as the orchestra’s first composer-in-residence (the orchestra’s final concert this season on April 27 will conclude with the world premiere of Boyer’s Symphony No. 1 (LINK);
• remade its staff and board of directors; and
• retired a $1.2 million debt.