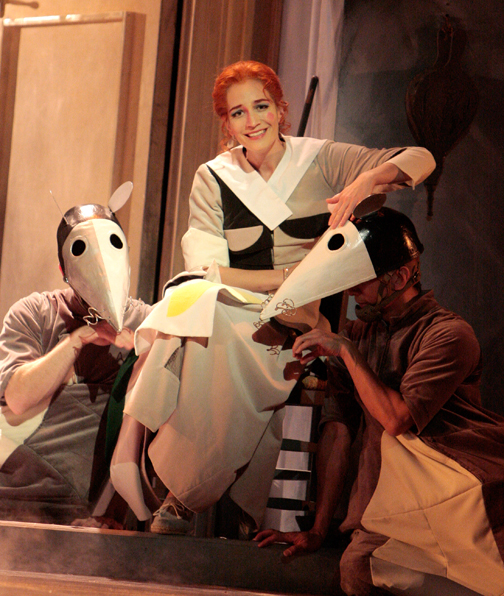 Kate Lindsey and her “magic rats” will be part of the joy infused in LA Opera’s production of Rossini’s Cinderella, which will open tomorrow night at the Dorothy Chandler Pavilion. Photo by Robert Millard.
______________________

This article was first published today in the above papers and in other LANG Papers.

The eyes of Kate Lindsey, the beautiful, young, American-born mezzo-soprano, sparkle at the question of whether as a child she wanted to be Cinderella. “What girl doesn’t dream of capturing a prince and living happily ever after?” she laughs heartily.

Beginning Saturday night at the Dorothy Chandler Pavilion, Lindsey gets her chance as she plays the lead role in Rossini’s Cinderella (or, more properly, La Cenerentola, since the performances will be sung in Italian with projected English supertitles). This time around, LA Opera is using a co-production from Houston Grand Opera and Gran Teatre del Liceu of Barcelona, directed by Spaniard Joan Font in his LAO debut. LAO Music Director James Conlon will conduct.

Lindsey is performing the role of Angelina (the name assigned by librettist Jacopo Ferretti to Cinderella) for the first three performances. Georgian soprano Ketevan Kemoklidze takes over after Lindsey departs to the Glyndebourne Festival in England where she will perform the role of the Composer in Richard Strauss’ Ariadne auf Naxos.

That’s the sort of hectic, nomadic life the 31-year-old Lindsey has been leading since she “graduated” from the Metropolitan Opera’s Lindemann Young Artist Development Program six years ago. Her meteoric rise has landed her roles in well-known houses worldwide, including the Met, Royal Opera Covent Garden, the Aix-en-Provence festival in France, San Francisco Opera, Santa Fe Opera and Seattle Opera, where the created the title role in Daron Hagen’s Ameila. Her LAO debut came two years ago as Zaida in another Rossini opera, The Turk in Italy.

“That’s the way you build a career,” says Lindsey. “One step at a time, one building block at a time. Some of the roles are the kind of ‘hands-down-yes’ parts that you won’t turn down. For others, it’s a matter of the team with whom you’ll be working, the size of the house, and other things that factor into the decision.”

Saturday will be Lindsey’s first professional performance of Angelina, although she did play the role in a student production in 2005 at the Wolf Trapp Festival outside of Washington, D.C. “One thing that’s great is that I’m actually getting to play a girl,” she says with a chuckle. “So many of my parts have been ‘trouser roles’ “ [a male character sung by a female; the Composer in Ariadne is one example].

“Angelina is a hard character to portray,” she continues. “She’s the one normal character in the opera, the most morally centered person in a sea of insanity that surrounds her.”

Rossini was just 25 when wrote Cinderella in a mere three weeks, a year after he composed The Barber of Seville. Although not universally acclaimed at its Rome debut, Cinderella has since been established as one of the composer’s finest works. LA Opera created a sparkling production in 2000.

When Rossini operas work well, says Lindsey, they do so because the entire creative team is meshing well. “This isn’t grand opera, like Wagner,” she explains. “It’s rapid-fire comedy with split-second interactions. Every person on the team is important and the relationships we build during rehearsals are critical. Fortunately this production has been seen eight times around the world so that gives all us performing a real comfort level.”

The cast includes René Barbera as Prince Ramiro, Vito Priante as Dandini, Allesandro Corbelli, as Don Magnifico (the wicked stepfather) and Nicola Ulvieri as Alidoro — all in their company debuts — along with LAO “veterans” Stacey Tappan as Clorinda and Ronnita Nicole Miller as Tisbe.

Don’t forget the rats, says Lindsey. The cast includes dancers who perform the role of rodents. “I call them my ‘magic rats,’ “ she says fondly. “They are so cute!”

Having sung all around the world, both in operas and as a soloist with orchestras, Lindsey has had to learn to adapt to performance venues. One of her challenges in Cinderella is the Dorothy Chandler Pavilion, which wasn’t designed primarily as an opera house when it opened nearly half a century ago. “When you sing at the Pavilion,” explains Lindsey, “you’re almost always facing forward so your voice can project throughout the house. Fortunately James [Conlon] is very aware of vocal balances, which is a great asset to a singer. He makes us all sound great.”

Lindsey learned as a youngster about musical teamwork. Her father is a retired Presbyterian pastor and she grew up singing in church choirs (“Children’s choirs, high school choir, bell choir — you name it and I was in it,” she recalls). When she returned home from Indiana University for breaks, she would drop in and sing with the choir — as an alto. She went on to receive a Bachelor of Music degree with distinction from IU before embarking on a professional career.

Now she’s flying around the world as she scales operatic mountains. Along the way, she even found her Prince Charming, marring Seattle optometrist Dr. Landon Jones in August 2011. They pick and choose their spots carefully when they can spend time together. “I’ll be at Glyndebourne for two months,” she says, “and he’ll come in when I have a five-day break. I don’t want him to see me in my ‘performance mode.’ “
_______________________
Hemidemisemiquavers:
• James Conlon article in the printed program discusses his re-kindled love affair with bel canto opera, of which Rossini’s Cinderella is but one example. Read it HERE.
• Tim Page, professor musicology and journalism at the USC Thornton School of Music, who won a Pulitzer Prize for music criticism in 1997, offers his take on Cinderella in a Los Angeles Times article HERE.
_______________________