Arts organizations love numbers ending with zero (or, to a lesser extent, five) or anything that divides evenly into the number 100 because it gives them ready-made opportunities for a celebration. This year, for example, the music world is celebrating the 200th birthday of Giuseppe Verdi and Richard Wagner and the centennial of Benjamin Britten’s birth. Locally, the Los Angeles Philharmonic is using its 10th season at Walt Disney Concert Hall as a focal point for its upcoming season — more on that next week.

So it’s no surprise that the Los Angeles Master Chorale’s 50th season — which opens Sunday night at Disney Hall — is a very big deal for one of the world’s foremost choral organizations. Sir Simon Rattle, chief conductor and artistic director of the Berlin Philharmonic, calls the Master Chorale “one of the finest choruses in the world without a doubt.” In his review of John Adams’ The Gospel According to the Other Mary at this summer’s Ravinia Festival, Chicago Tribune Music Critic John von Rhein described the Master Chorale as “marvelous” and continued “these inspired choral sections are prime Adams and were beautifully rendered by [LAMC Music Director Grant}Gershon’s choristers, who sang magnificently throughout.”

In Sunday’s concert, Gershon, who has headed LAMC since 2001, will lead a program that highlights works sung during his 12-year-tenure and those of his three predecessors as music director: Roger Wagner (1964-1986), John Currie (1986-1991) and Paul Salamunovich (1991-2001). KUSC radio personality Alan Chapman will host the event. A historical exhibition of Chorale memorabilia and photos will be on display in the Disney Hall gallery before the concert. (Click HERE for the media release, which contains the complete program). 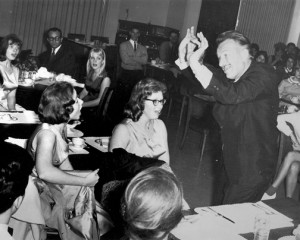 Roger Wagner leads singers in a circa 1965 performance in the home of businessman Louis D. Statham, who helped found the Chorale. (Of Note: Statham’s home was later bought by Hugh Heffner and became the Playboy Mansion).
_______________________

The upcoming season will include 14 performances of 10 programs plus appearances on four Los Angeles Philharmonic programs. Included are world premieres of pieces by Esa-Pekka Salonen, David Lang, Francisco Nuñez and LAMC Composer-in-Residence Shawn Kirchner, all composed in honor of the 50th anniversary season. All will be performed on the season-ending concert on June 8, 2014. The Chorale has an extensive history of commissioning new works, particularly during Gershon’s tenure.

The 2013-2014 season will include two performances of Bach’s Mass in B Minor, the piece performed at the group’s inaugural concert in 1965; this program will be sung on Jan. 25 and 26, 2014 at the Dorothy Chandler Pavilion, (the Chorale’s home before moving to Disney Hall 10 years ago). The Chorale’s first concert came just 123 days after the Pavilion was opened.

Another major event will be a tribute to acclaimed composer Morten Lauridsen on March 16. Lauridsen, a Hollywood resident and professor of music at the USC Thornton School of Music, was formerly the Chorale’s composer-in-residence. During that tenure, he wrote Lux Aeterna, one of the most significant choral works of the 20th century. The Chorale was nominated for a Grammy for its recording of the piece.

Other works to be sung during the season will be Orff’s Carmina Burana and Verdi’s Te Deum on Nov. 2 and 3; Respighi’s Laud to the Nativity, Britten’s A Ceremony of Carols and Stephen Paulus’ Christmas Dances on Sept. 8; Steve Reich’s You Are and David Lang’s The Little Match Girl Passion on April 6. There will also be two performances of Handel’s Messiah along with the annual Messiah Sing-A-Long in December.