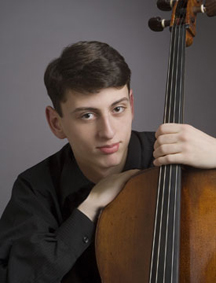 Nearly three years ago — on Jan. 22, 2011 — the Pasadena Symphony concert at Ambassador Auditorium featured a virtually unknown (locally, at least) Armenian-born cellist named Narek Hakhnazaryan, who would go on to win the gold medal in the 14th Tchaikovsky International Competition the following June. (A link to my story about his win is HERE).

Hakhnazaryan, now age 24, returns to the Southland not via any of our local ensembles but with the Estonian National Symphony, which appears Friday night at CSUN’s Valley Performing Arts Center in Northridge. His vehicle will be the same as he played in Pasadena — Dvorak’s Cello Concerto — so it will be interesting to see how three intervening has changed his interpretation of the most famous piece written for cello and orchestra.

The ENSO’s performance at VPAC is the second stop on a nationwide tour of 15 concerts over 18 days; just the California portion seems arduous: Thursday in Santa Barbara, Friday at VPAC, Saturday at Stanford University, Sunday in Aliso Viejo, with a day off before appearing in Ames, Iowa on Nov. 5. Later tour stops are in Wisconsin, Michigan, Florida, Georgia and New York, including concerts at Avery Fisher Hall in New York City’s Lincoln Center for the Performing Arts.

The California stops will include three of the state’s newest — and highly rated — concert halls: VPAC, Bing Concert Hall at Stanford and the Sokia Performing Arts in Aliso Viejo.

Estonian native Neeme Järvi, the orchestra’s artistic director and patriarch of a well-known conducting line (LINK), is leading the initial portion of the tour.
_______________________