By Robert D. Thomas
Music Critic
Pasadena Star-News/San Gabriel Valley Tribune/Whittier Daily News
A shorter version of this article was published today in the above papers. 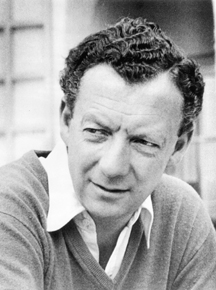 We’re in the penultimate two months of a year honoring birthdays of three of history’s most important composers: the bicentennials of Giuseppe Verdi and Richard Wagner and the centennial of Benjamin Britten (right), which occurred on Friday (Nov. 22). The Britten centennial reaches its climax locally today and tomorrow with a massive collaboration on Britten’s most significant work: War Requiem.

These performances are among hundreds that have been part of Britten 100/LA, which has been spearheaded by LA Opera but which has involved hundreds of different organizations, large and small, throughout the Southland.

Los Angeles Opera Music Director James Conlon takes a break from conducting the company’s new production of Verdi’s Falstaff and Mozart’s The Magic Flute to lead The Colburn Orchestra and members of the USC-Thornton Symphony (the work calls for a large main orchestra and a smaller-sized ensemble), organ, three soloists, five university choirs and the Pasadena-based Los Angeles Children’s Chorus in War Requiem tonight at 8:15 at Renée and Henry Segerstrom Concert Hall in Costa Mesa and tomorrow at 8 p.m. at Walt Disney Concert Hall in Los Angeles.
“Break” may be a misnomer; Conlon leads a Falstaff performance beginning at 2 p.m. on Sunday at the Dorothy Chandler Pavilion, so he may be changing clothes as he drives/flies down the freeway. 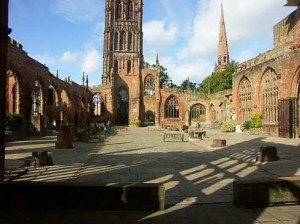 War Requiem premiered on May 30, 1962 in the new Coventry Cathedral in the center of England. The city’s 14th century Gothic cathedral, St. Michael’s, had been destroyed by a Nazi air raid on Nov. 14, 1940. Only the tower, spire, outer wall and the bronze effigy and tomb of its first bishop, Huyshe Wolcott Yeatman-Biggs, survived.

Following a competition that received entries from more than 200 architects, Basil Spence was selected to design a new cathedral. He insisted that the ruins of the old cathedral be kept as a stark memorial and his dramatic new cathedral was built alongside; a glass canopy connects the two buildings. For his stunning conception, Spence was knighted by Queen Elizabeth II in 1960.

Britten, a renowned pacifist, was 48 when the piece was first performed and was given free rein to compose the dedicatory work. He chose to interleave portions of the Roman Catholic Requiem Mass with gritty poems written by Wilfred Owen during World War I. Britten used one of Owen’s poems as a preface to the work: “My subject is War, and the pity of War. The poetry is in the pity. All a poet can do is warn.” Owen died on Nov. 4, 1918, exactly one week (almost to the hour) before the signing of the Armistice that ended the war.

The piece lasts about 85 minutes (there is no intermission), and is considered by most to be a landmark 20th century composition. A unique part of the composition is that Britten wrote for soloists (soprano, baritone and tenor) who were meant to characterize individual Russian, German and English soldiers.

According to the Britten-Pears Foundation, “Britten intended that the soloists at the first performance should represent three of the nations involved in World War II: Galina Vishnevskaya (Russian soprano), Peter Pears (English tenor), Dietrich Fischer-Dieskau (German baritone). In the event, precisely because of this tri-national partnership of representatives, Vishnevskaya was refused permission to attend by the Russian Minister of Culture. Although she was later able to record the work, she did not sing it until 1963; her place at the première on 30 May 1962 was taken by Heather Harper.”

The Disney Hall performance is part of the Los Angeles Philharmonic’s “Sounds About Town” series, which this season has dwindled to just two concerts, both by The Colburn Orchestra. One feature of this series has always been its low prices: tickets for “War Requiem” range from just $15.99 to $41.50. By contrast, the Segerstrom Concert Hall tickets are scaled from $20 to $150.

Conlon will give a preconcert lecture an hour before the Disney Hall performance. At Segerstrom Hall, Dr. William Hall, who led one of the first Southern California performances of War Requiem, will deliver the lecture at 7 p.m. In part because of the work itself and in part because it is so rarely performed, this is a “don’t miss” event.

Hemidemisemiquavers:
• How rare are these concerts? According to the Britten-Pears Foundation, these concerts and a set by the San Francisco Symphony next weekend are the only North American performances of War Requiem for the balance of this year (performances have been held recently in Baltimore, Washington, D.C., Boston and Chicago — see below). The SFO schedule is somewhat odd: Nov. 27 and 30 with nothing between.
• It’s possible that this will be the only time that most of the instrumentalists and choristers will play and/or sing War Requiem in their lifetimes.
• The program notes for tonight’s Segerstrom Hall concert are HERE (they come courtesy of the Cincinnati Symphony). Click on the note to make the type larger and click on the arrows to navigate the pages. These notes (actually pages from the program book) also include the text and performer bios.
• The program notes for the Disney Hall performance are HERE. These also include an iTunes link to the original cast recording with Britten conducting HERE.
• The writeup on War Requiem from the Britten-Pears Foundation is HERE.
• A fascinating interview in The Guardian with composer Oliver Knussen’s reflections on Britten is HERE.
• Anne Midgette, music critic of the Washington Post, and her husband and fellow critic, Greg Sandow (who is also a composer, consultant and educator) have written a series of articles on recent performances of War Requiem in Washington, D.C. and Baltimore, including somewhat contrasting reviews of the same performances. If you’re interested, click HERE for an overview and follow the various threads to the relevant stories. However, you might want to wait until you’ve seen either of the local concerts.
• When Charles Dutoit led the Chicago Symphony in War Requiem last week, he honored Britten by using Russian soprano Tatiana Pavlovskaya, English tenor John Mark Ainsley and German baritone Matthias Goerne as the soloists. Nice touch.
_______________________