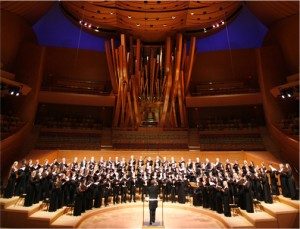 Forty-nine years almost to the day (Jan. 27, 1965) from when Roger Wagner stepped onto a podium in the newly minted Dorothy Chandler Pavilion to conduct Los Angeles Master Chorale in its inaugural concert, a performance of Bach’s B Minor Mass, the Chorale will celebrate that first concert with a performance of Bach’s masterpiece on Saturday afternoon and next Sunday evening in Walt Disney Concert Hall.

Grant Gershon, who became the Chorale’s fourth music director in 2001, will lead 115 singers including 12 soloists (all Chorale members) plus a symphonic orchestra in what turned out to be one of the final pieces that Bach completed, a work considered to be a pinnacle of choral music. The Mass contains music that Bach had composed over a quarter-century, although most of it was revised for the final work. The B-Minor Mass was never performed in totality during Bach’s lifetime; the first documented complete performance took place in 1859.

The performance marks the Chorale coming full circle from when famed conductor Roger Wagner founded the chorus in 1964. Wagner — who had created his own small group, the Roger Wagner Chorale, in 1945 — formed the Los Angeles Master Chorale as one of three resident groups of the Music Center of Los Angeles. For the first 39 years, it performed at the Dorothy Chandler Pavilion. Since the completion of Walt Disney Concert Hall 11 years ago, the LAMC has joined the Los Angeles Philharmonic as resident groups at that iconic hall.

In addition to presenting history’s major choral works, the Master Chorale has commissioned 39 and premiered 88 new works, of which 57 were world premieres. The Master Chorale has half-dozen of its own CDs, most notably the first CD of Morten Lauridsen’s Lux Aeterna. The group will be featured on an upcoming CD of John Adams’ oratorio, The Gospel According to the Other Mary, scheduled to be released March 10 by Deutsche Grammophon. Gustavo Dudamel conducts the Los Angeles Philharmonic, the Master Chorale and soloists in this live recording at Disney Hall.

Next weekend’s concerts are among the 14 programs on the Master Chorale’s 50th anniversary season, along with its extensive work with the Los Angeles Philharmonic. The weekend will include a gala celebration entitled “Golden on Grand,” which will take place at 6 p.m. in the Eva and Marc Stern Grand Hall of the Pavilion. Tickets for that event are $650 per person. Information: www.lamc.org
_______________________