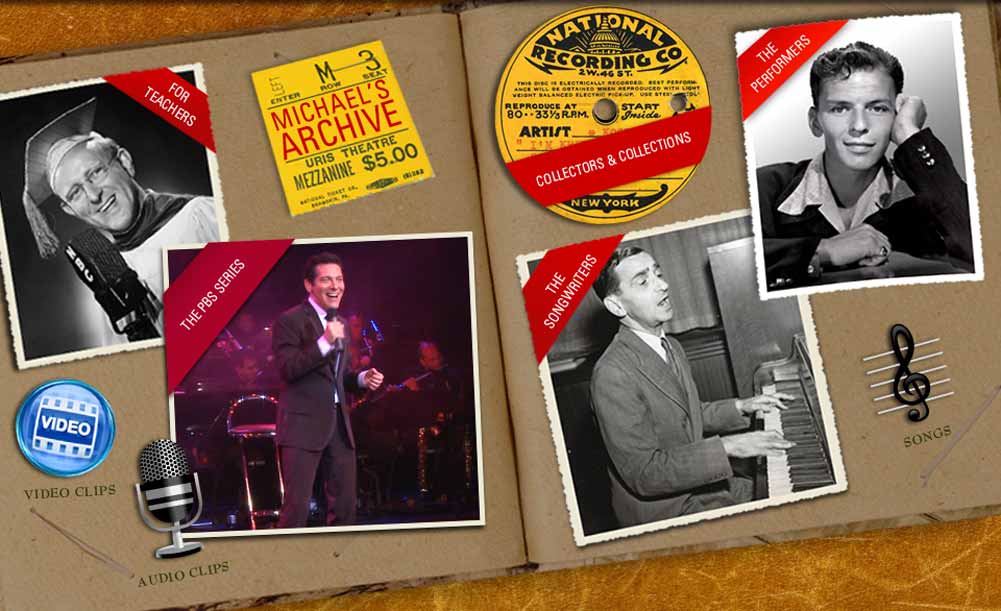 When I first heard the term “The Great American Songbook,” I thought it was actually a book — I even went online to see whether I could purchase it. If I had, I would have needed to be a loose-leaf notebook, because “TGAS” is, in reality, a living, expanding organism, as one of its greatest exponents, Michael Feinstein explains.

”The Great American Songbook is a body of work that began in the earlier part of the 20th century, crystalizing in the 1920s and continues today,” Feinstein explains. “It contains music and lyrics that transcend their time — they have a timeless quality that appeals to contemporary audiences.”

One could, of course, make the same claim for classical music. “We’re still listening to the music of Schubert and Brahms because it still has value or resonance today,” says Feinstein. “It’s the same things with these songs: this is popular music that has turned into standards by still being performed: people continue to want to hear them.”

By Feinstein’s definition, “The Great American Songbook” begins with music from the 1920s. “There are a few songs from the early 1900s that survive — Stephen Foster and Victor Herbert, for example,” continues Feinstein, “but the creations that began in the 1920s had a certain level of sophistication in the words, a clever turn of phrase, that not only has appeal today but continues to speak to the human condition. It is time that determines what lasts, not someone saying, ‘This is part of The Great American Songbook.’”

Feinstein’s devotion to what would become TGAS began in the 1970s when he was introduced to Ira Gershwin, who hired him to catalogue his extensive collection of phonograph records. “I fell in love with the Gershwins’ music at a very early age,” recalls Feinstein, “and then had the opportunity of knowing and working with Ira Gershwin for six years.”

Later he began cataloguing and preserving the unpublished sheet music and rare recordings in Gershwin’s home, thus securing the legacy of not just Ira but also that of his composer brother George Gershwin, who had died four decades earlier. “He [Ira] taught me much of what I know about this music and how to perform it.”

That preservation work continues to this day. “I have office space where I have thousands and thousands of pounds of sheet music,” says Feinstein who has lived in a 1920s-era castle-like house since 1998 (“it’s a peaceful retreat, which is necessary for balance in my life”). Feinstein has a full-time archivist working in Hollywood. Some of the material can be scanned but not all. “Some are not readable enough to be digitized,” explains Feinstein.

“One of the problems with songs written today is that they are often identified indelibly an individual performer. One example is Pharrell Williams’ song, Happy. Other people can sing it but it’s really identified with him. So I don’t know what has been written in the last 20 years that will last, aside from the specific recordings. And maybe that’s how they will last because technology is such that people will go back to that specific recording.”

Feinstein cites one of many examples. “A song like Skyfall, by Adele: It won an Oscar but that’s a terrible song. It’s three chords and succeeds because of the power of her interpretation. She’s a powerful and talented performer but not’s delude ourselves: it’s not a great song and outside of her performance I doubt very much if that song will last.”

One of the things that make a song last is that it’s been interpreted by many people in many different ways. “Any given Gershwin song can have hundreds of interpretations,” says Feinstein. I Got Rhythm was introduced by Ethel Merman in 1930 but it is the different types of interpretations over the years that has kept it alive.”

Feinstein’s work in TGAS takes many forms. In 2007, he founded the “Michael Feinstein Great American Songbook Initiative,” dedicated to celebrating the art form and preserving it through educational programs, Master Classes, and the annual High School Vocal Academy and Competition, which awards scholarships and prizes to students across the country.

He serves on the Library of Congress’ National Recording Preservation Board, an organization dedicated to ensuring the survival, conservation and increased public availability of America’s sound recording heritage.