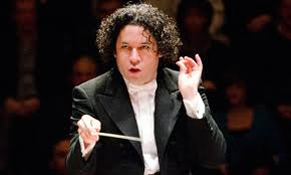 During his sixth season as the Phil’s music director, Dudamel, now age 33, will conduct 12 subscription programs during the upcoming season along with Tuesday’s gala. Dudamel will also lead the orchestra on an Asian tour in March 2015.

The gala (which benefits the musicians’ pension fund) will honor legendary movie score composer John Williams, whose 49 Academy Awards are second only to Walt Disney. Dudamel will conduct music ranging from familiar (Star Wars) to less-well-known scores (The Adventures of Tintin). Violinist Itzhak Perlman will be the soloist in excerpts from Schindler’s List and Fiddler on the Roof.

The opening week of LAPO subscription concerts (Oct. 2, 3, 4 and 5) will begin with the U.S. premiere of man made by Pulitzer Prize-winning composer David Lang. The quartet “Sō Percussion” will be the soloist in the concerto, a L.A. Phil co-commission that was written for the quartet and premiered last May in London. This will be one of 10 L.A. Phil-commissioned works in the upcoming season.

In his program note, Lang wrote: “I have worked with Sō Percussion (pictured left) for a very long time now. They are frequently theatrical, they invite found objects into their performances, they build their own instruments, etc. I wondered if I could make the unusualness of their musicality the centerpiece of this concerto, but how could an orchestra of ‘normal’ instruments doing mostly ‘normal’ things find common ground with them?”

“The opening, for example begins with the soloists snapping twigs, which the orchestral percussionists translate into woodblocks, marimba, and xylophone, which the orchestra takes up and embellishes, eventually overwhelming the soloists. This process of finding something intricate and unique, decoding it, regularizing it, and mass producing it reminded me of how a lot of ideas in our world get invented, built, and overwhelmed, so I decided to call it man made.”

This weekend’s concerts will conclude with Mahler’s Symphony No. 5, a work that Dudamel has conducted and recorded with his Simón Bolivár Symphony Orchestra of Venezuela. However, this marks the first time that he has conducted it with the Phil.

The second week of subscription concerts (Oct. 9, 10, 11 and 12) will find Dudamel conducting John Adams’ Harmonium, along with Beethoven’s Choral Fantasy and Piano Concerto No. 5 (Emperor). Pianist Leif Ove Andsnes and the Los Angeles Master Chorale will be the soloists.

Two other L.A. Phil series begin during the upcoming fornight. Sō Percussion and LAPO percussionists will open the Phil’s “Green Umbrella” series of new-music concerts on Tuesday at 8 p.m. in Disney Hall, performing music by David Lang and Michael Gordon, co-founders of the group “Bang on a Can.”

HEMIDEMISEMIQUAVERS:
• The “Green Umbrella” and organ recital concert are part of a new Phil new ticketing policy where a limited number of seats are offered for $20. They are available online, by phone and in person at the box office. INFO

• The opening concerts also mark the resumption of “FastNotes,” the orchestra innovative informational effort. You sign up for a Phil email account (no charge) and a few days before each concert you get an email with program notes, bios, links, audio samples and ticketing information about the event. A few other organizations have similar programs but none as good as the Phil’s. LINK

• The Phil has also announced that Danish conductor Christian Kluxen and New Zealand native Gemma New will participate in this season’s Dudamel Fellowship Program. This program has shrunk during the past two years, going from four Fellows in 2012-13 to three last season and now two. However, LAPO Director of Public Relations Sophie Jeffries reports: “There is no fixed number for how many Dudamel Fellows are announced each year. It has to do with identifying young conductors to take part and also their availability.”

Lluxen leads the Philharmonia of London’s “iOrchestra” project and just finished a three-year stint as Assistant Conductor of the Royal Scottish Orchestra. New is Associate Conductor of the New Jersey Symphony and Founder and Director of the Lunar Ensemble, a contemporary music collective in Baltimore.

ALSO UPCOMING:
Two of the Southland’s — indeed, the nation’s — premiere youth orchestras open their seasons during the next fortnight.

• Roger Kalia begins his final season as music director of the Young Musicians Foundation Debut Orchestra on Oct. 5 at 7:30 p.m. at the Aratani/Japan American Theater in Little Tokyo. The program, which celebrates 60 years for the YMF, will feature flutist Catherine Baker and soprano Solène Le Van as soloists; both were Special Recognition winners in the recent YMF Debut Concerto Competition. Tickets are $5. Information: www.ymf.org

• Meanwhile, the American Youth Symphony kicks off its 50th anniversary season with a free concert on Oct. 12 at 7 p.m. in UCLA’s Royce Hall. Music Director Alexander Treger leads his ensemble — 107 musicians, ages 15 to 27, representing 26 schools — in Mahler’s Symphony No. 5 and the world premiere of Henri Lazarof’s Cello Concerto No. 4. Alan Steele, who at age 21, departed the AYS to become principal cellist of the Fort Worth Symphony, will be the concerto soloist. Information: www.aysymphony.org
_______________________