Following is what I would have added into the print version of the column if I had the space. 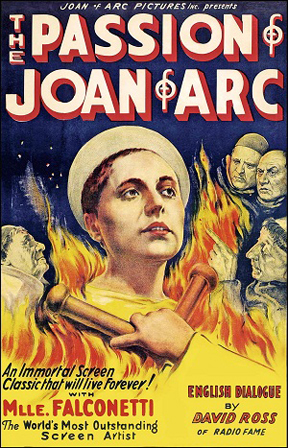 Carl Dreyer’s 1928 film, The Passion of Joan of Arc, was based on the actual 15th century transcripts of St. Joan’s trial for heresy, portrays her trial and execution. Dressed as a boy, she led French troops in a defeat against British occupiers during the “Hundred Years’ War.” She was later captured, tried by French clergy loyal to the British, and condemned to death by burning at the stake for her belief that she was spurred to action by religious visions.

There’s a great deal of information about Voices of Light on Einhorn’s Web site HERE. The Master Chorale Web site (LINK) has two video clips of the movie. 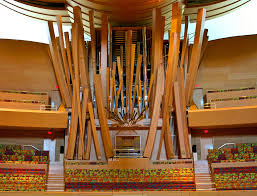 The Los Angeles Philharmonic is in the midst of celebrating the 10th anniversary of the Walt Disney Concert Hall organ, nicknamed by organist and composer Terry Riley “Hurricane Mama.” On Oct. 24, 25 and 26, the Phil will present the U.S. premiere of Kaija Saariaho’s Maan varjot (Earth Shadows), a work for orchestra and organ with Olivier Latry, titular organist at Notre Dame de Paris, as soloist. (Click HERE for a Financial Times article that is both an explanation and a review of the London performance. The world premiere was for the dedication of the new hall in Montreal’s symphony hall).

The Disney Hall organ —- 6,145 pipes (72 stops, 109 ranks), ranging in size from a pencil to a telephone pole —- is one of the larger and most impressive instruments in Southern California. Frank Gehry, the Disney Hall architect, and organ builder Manuel Rosales, Jr. collaborated on the unusual visual design, including the curved wood façade pipes made of Douglas fir — I liken their look to an overturned bag of French fries. Rosales and Glatter-Götz Orgelbau of Germany built the mechanical design, construction, tuning and voicing. Behind the façade are three levels of pipes, including metal pipes made of tin and lead alloys and wood pipes made of Norwegian pine. (More info HERE) 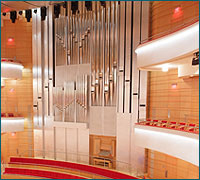 In the Pacific Symphony concert, “Cathedrals of Sound” on Oct. 23, 24 and 25 at the Renée and Henry Segerstrom Concert Hall in Costa Mesa, Paul Jacobs, one of the nation’s premiere organists, will be playing the William J. Gillespie Concert Organ in Segerstrom Concert Hall. At 4,322 pipes (57 voices, 75 ranks), this instrument — built by C.B. Fisk, Inc. of Gloucester, Mass. — is smaller than the Disney Hall organ and has a much brighter sound than its L.A. counterpart. The Gillespie organ uses tracker action from a four-manual keyboard mounted on the wall underneath the distinctive aluminum-leafed or polished tin pipes. (More info HERE).

Duruflé created three different versions of his Requiem. The Pacific Symphony will use the full version with orchestra, which was written in memory of the composer’s father 1947 under a commission from his publisher. Concurrent with the full version, Duruflé also wrote an edition for organ accompaniment alone, and in 1961 created a version for organ, 3 trumpets, timpani, harp and strings.