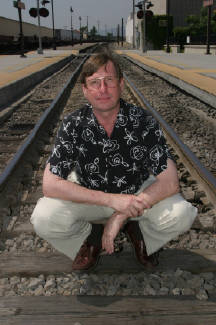 More than four years after it was supposed to debut, Symphony No. 4 by Stephen Hartke (right) will finally get its world premiere during a highly appropriate weekend, as the Los Angeles Philharmonic celebrates the 10th anniversary of the Walt Disney Concert Hall with concerts on Nov. 20, 21, 22 and 23.

LAPO Music Director Gustavo Dudamel will conduct the programs, which will include Barber’s Toccata Festiva and Saint-Saëns Symphony No. 3 (“Organ”), with Cameron Carpenter as the soloist.

What makes Harke’s three-movement work appropriate is that he always intended it to be a symphony for orchestra with organ. “It’s not an organ concerto,” says the 62-year-old Glendale resident, who has taught composition at the USC Thornton School of Music for 27 years. “My idea all along was to use the organ as an integral part of the orchestra, as a fifth choir, so to speak [Ed. Note: along with strings, winds, brass and percussion]. It’s the largest symphony that I have written — when you have as big an instrument as the Disney Hall organ, you have to respond to it.”

Symphony No. 4 was originally scheduled to be the in the final concert of Dudamel’s inaugural season in 2009-2010 but a combination of circumstances caused a delay. “Some pieces take a long to write; some pieces don’t,” he explains with a shrug. “Along the way I had other pieces to write, so here we are.”

During the past decade the work also underwent a significant change. “I happened upon a [Frederico Garcia] Lorca “gypsy ballad” poem, Sleepwalking Ballad,” relates Hartke, “and so the end of the symphony became like Mahler 4, where the main drama of the piece has been played out and you have an aria at the end, a reflection on some of the issues in the piece, that kind of takes the piece in a different direction.”

Why Lorca? “I don’t know precisely why Sleepwalking Ballad struck me as a fitting ending for the piece,” concedes Hartke, “but once I read it I couldn’t get it out of my head. Lorca’s poetry is very vivid and serene at the same time.” (Read the poem’s text HERE) American soprano Heidi Stober will sing the poetic ballad in this weekend’s performances.

Perhaps it was ordained that Hartke would write this work. “I’ve been wanting to write a piece for organ for a long time,” says Hartke, who was composer-in-residence for the Los Angeles Chamber Orchestra from 1988 to 1992. When he was an undergrad at UC Santa Barbara he served for a time as organist for a small church in Isla Vista, “but I wouldn’t boast about it,” he admits with a chuckle.

However as he came to know the Disney Hall organ, he fell in love with it. “I got to spend a fair amount of time with the instrument on off hours and holidays and decided on a kind of palette of things I wanted to do,” he explains.

“In the first movement the organist mostly plays single line but it does things that only the organ can do, such as shaking the floor a little bit. In the middle section, I use registrations that create colors, and overtones to create sounds that are almost like what you get in percussion and strings. In the last movement I let the organist pull out all the stops, to use that metaphor in its literal sense. In the end, it turned out to be a more extensive part that I expected it would be.” 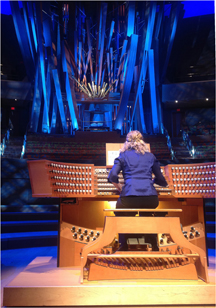 It was also a piece that was written specifically for the L.A. Phil under a commission from Edward Halvajian (1935-2009), former chairman of the Orange County Philharmonic Society. “It was my plan in the beginning to write a piece that would use the entire roster of the orchestra,” he says.

Joanne Pearce Martin (pictured right playing the Walt Disney Concert Hall organ) — who has been the orchestra’s principal keyboard player since 2001 and will be playing the organ part — is excited about the upcoming premiere. “I can’t wait to hear the piece with the orchestral,” she said earlier this week. “So far, all I’ve been able to do is visualize the orchestral part in my mind from studying the whole score. The organ part is very colorful, very intricate; there’s a lot of weaving in and out of the orchestra. It’s a very beautiful piece.. I think it’s going to be great.”

The premiere will put Hartke in the spotlight, which also happened in 2013 when he won a Grammy Award for Best Contemporary Classical Composition. His Meanwhile — Incidental Music to Imaginary Puppet Plays was recorded by eighth Blackbird, which also won a Grammy for Best Chamber Music/Small Ensemble Performance that year.

“It wasn’t a surprise that eight Blackbird got a Grammy for the disc,” say Hartke, “but it was a surprise that I got it. I’ve never kept track of the Grammys; it was amusing to go to the ceremony. It probably meant more to my students than to me. I just have this funny-looking thing in the other room that I have to dust once in awhile.”
_______________________