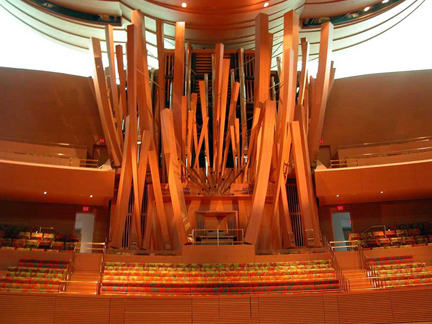 The Walt Disney Concert Hall pipe organ celebrates its 10th anniversary this weekend with a series of concerts. (Photo from Los Angeles Philharmonic)
__________________

Additional notes on the organ:
• With 128 stops, the Disney Hall organ is unusually flexible, especially given its size. The word “stop” is ironic since to create sound organists draw the stop knobs toward them, whereas when they push the knob and the sound “stops.” There are 80 manual thumb pistons and 28 pedal toe-pistons that function like push buttons on a car radio, allowing the organist to set combinations of pipes (often called registering the organ). A computer provides 300 memory levels for the organist’s preset registrations, which gives an organist more than 32,000 different registrations.
• The main keyboard uses mechanical (aka “tracker”) action, with wooden rods connecting the 61 keys on four keyboards (manuals) to their pipes. The stage console uses electro-pneumatic lines to connect the keyboards to the keys. There’s quite a difference both the action of the keys and how the organist hears the sound, depending on whether they’re on the stage floor or enveloped in the pipes surrounding the main keyboard.
• The main keyboard and the stage console are each equipped with digital recorders for playback and archival purposes. Using that facility, the organist can record a piece and then sit in the hall to hear how it sounds to an audience member.
• Manuel Rosales and his company, Rosales Organ Builders, collaborated with the German firm Glatter-Götz Orgelbau on the mechanical design, tuning and voicing of the organ more than a decade ago. It was Rosales’ firm that did the voicing and tuning of the instrument once it was shipped from Germany and he continues to maintain it today.

Other concert hall organs:
• At 6,134 pipes in 109 ranks (or sets), the Disney Hall organ is one of the largest concert hall instruments in the world but not the largest. Others larger are:
— Davies Hall, San Francisco: 147 ranks, more than 8,000 pipes; built by Fratelli Ruffatti Co. of Padua, Italy and installed in 1984.
— Verizon Hall (Kimmel Center), Philadelphia: 125 ranks, 6,938 pipes; built by Dobson Pipe Organ Builders of Lake City, Iowa and installed in 2006.
• Locally the Disney Hall organ is roughly the same size as the Royce Hall, UCLA instrument, built in 1930 by the E.M. Skinner Co. and restored after the 1971 Sylmar earthquake. The Royce Hall organ has more pipes (6,600+) but less ranks (104) than the Disney Hall instrument.

E.M. Skinner was active during the first 1/3 of the 20th century. It merged in 1932 with the pipe organ division of the Æolian company to become the Æolian-Skinner Pipe Organ Co., one of America’s most significant organ-building companies until it closed in 1972.
• The Disney Hall organ is slightly smaller than the new organ (6,489 pipes, 116 ranks) built last year by Casavant Freres of St-Hyacinthe, Quebec for the Maison symphonique de Montréal, home to Orchestre Symphonique de Montréal.
• OTHERS: The Kennedy Center has a 5,000-pipe organ built by Casavant Freres. Dallas’ Meyerson Symphony Center’s organ, by C.B. Fisk, Inc. of Gloucester, Mass. with 4,535 pipes, which is somewhat larger than the William J. Gillespie Organ (also a Fisk) at the Renée and Henry Segerstrom Concert Hall in Costa Mesa (4,322 pipes). The Chicago Symphony Hall has a Casavant organ with 3,414 pipes (59 ranks).

Large church organs:
Many churches and cathedrals around the world have pipe organs larger than Disney Hall.
• First Congregational Church, Los Angeles, has a combination of pipe organs that add up 20,417 pipes (346 ranks). The main organs are an E.M. Skinner model built in 1937 in the chancel and a Schlicker model installed three decades later in the West Gallery. There are other divisions spread around the sanctuary. Everything can be played from either the Skinner or Schlicker keyboard.
• Christ Cathedral in Garden Grove (formerly the Crystal Cathedral) has a Ruffatti instrument that was designed for The Rev. Robert Schuller’s original church and then reinstalled in the Crystal Cathedral in 1962. There it was combined with the 1962 Aeolian-Skinner pipe organ once housed at Avery Fisher Hall in New York City’s Lincoln Center. The organ, currently under restoration by Ruffatti, has nearly 16,000 pipes (273 ranks).
• Lake Ave. Church in Pasadena has a Casavant organ with more than 7,000 pipes (125 ranks).

World’s largest pipe organs:
The world’s largest pipe organ is in the seven-story-high court at Macy’s Department Store (formerly Wanamaker’s) in Philadelphia. This instrument was originally built in in 1904 for the St. Louis World’s Fair by the Los Angeles Art Organ Company, which was formed after the Murray M. Harris Co. folded. (Harris was one of the notable organ builders at the turn of the 20th century — the organ at the First Church of Christ Science, Pasadena, is a Harris, as is the organ at Stanford University’s Memorial Church). After the St. Louis World’s Fair, John Wanamaker bought the organ for his department store.